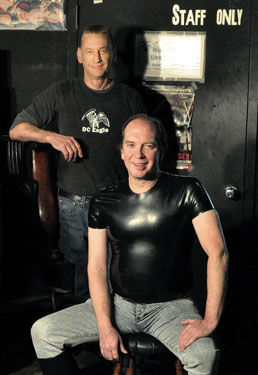 The owners of the DC Eagle, the D.C. area’s primary gay leather/levi bar that was forced to shutter its doors temporarily in January after its landlord chose to terminate its lease three years early, say they have finalized their purchase of a new property located at 3701 Benning Rd. NE.

Eagle co-owner Peter Lloyd tells Metro Weekly that the sale was finalized on May 27, saying, “I signed my life and my afterlife away. And initialed for it.”

The bar is waiting for the proper permits needed to clean up and renovate the space, but is expecting the first construction renovations to start on Monday, June 9, just after Capital Pride. In the meantime, the bar has been holding occasional “pop-up events,” or “Eagle-N-Exile” events at Capital Fringe on New York Avenue NW, just steps away from its old location. Capital Pride weekend will mark the Eagle-N-Exile’s last time at Capital Fringe.

“Do you know what the theme is for Capital Pride this year?” Lloyd asks. “Building Our Bright Future. It’s almost as if they picked us for it. The serendipitous nature of it is amazing. We get to announce our plans for a new place just in time for Pride.”

Lloyd and co-owner, Ted Clements, have been attending various Advisory Neighborhood Commission (ANC) and Department of Transportation meetings in order to build better relationships with the surrounding neighborhood. Lloyd says the ANC in Ward 7 has been very cooperative in working with the Eagle.

“I really want to be good neighbors,” Lloyd says, adding that the new location is both accessible via buses, the Minnesota Avenue stop on Metro’s Orange Line, and – hopefully – the new streetcar trolleys, whose tracks extend to Oklahoma Avenue, about a mile away.

Under the plans for the new space, the first floor of the building will be dedicated to a restaurant. The second floor will feature a DC Eagle bar and a separate cigar bar known as “Terminal Alley.” On the third level, Lloyd plans to have a dance bar, with a performance space where the Eagle can hold various fundraisers, open mike nights, or can invite local bands or musical talents to play.

The Eagle bar on the second floor will likely open first, with the restaurant opening later due to various permitting and inspection obstacles involved with setting up an eating establishment.

“We hope to be open by late summer,” he says. “Though it may be an Indian summer. All of our former employees are excited, and we will hire more people after we open.”

John Riley is the local news reporter for Metro Weekly. He can be reached at jriley@metroweekly.com
← Previous Story Holiday’s Road
Next Story → A reigning DJ in gay clubland, Joe Gauthreaux aims to become a hit music producer as well