Roberta Kaplan, the lawyer who represented Edith Windsor in her legal fight against DOMA, looks back at the beginning of the end

“It literally took me seconds to decide it was the perfect case,” Roberta Kaplan recounts of her first meeting with Edith Windsor.

It was 2009, and a few months prior, Windsor’s partner of more than 40 years, Thea Spyer, had died. Living most of their lives in New York City’s Greenwich Village, Windsor and Spyer were engaged to marry in 1967. Instead of an engagement ring, which they feared could raise questions at work, Spyer gave Windsor a circle pin adorned with diamonds so as to keep their relationship a secret. The long engagement was finally sealed in May 2007 with a Canadian marriage license, as Spyer’s health began to deteriorate. Overwrought with grief following Spyer’s death, Windsor suffered a heart attack. 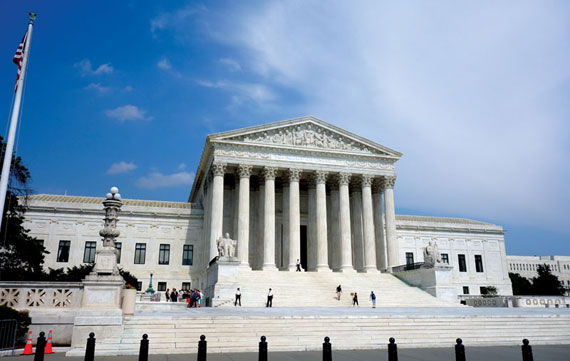 As she recovered, however, Windsor began to realize the injustice of her situation when she was slapped with a $363,053 federal estate tax she was forced to pay on her “inheritance” from Spyer. Even though New York recognized the couple’s marriage, because of Section 3 of the Defense of Marriage Act, which prohibited federal recognition of same-sex marriage, the federal government treated Windsor and Spyer as legal strangers. Had they been a man and a woman, the federal government never would have taxed the wealth that passed to the surviving spouse.

After being turned down by various lawyers and LGBT civil rights groups, Windsor, now 85, and Kaplan, 47, were put in touch by mutual friends. Kaplan, who married her spouse, Rachel Lavine, in Toronto eight years ago, is a partner at the law firm Paul, Weiss, Rifkind, Wharton & Garrison and has included JPMorgan Chase and Fitch Ratings among her clients. But it was her teaming up with Edie Windsor that would make gay rights history.

In November 2010, Windsor and Kaplan sued the federal government in U.S. District Court to recoup the $363,053 Windsor paid in taxes. It was that case that would ultimately reach the U.S. Supreme Court, which rendered a sweeping and consequential ruling in U.S. v. Windsor on June 26, 2013 that has given the marriage-equality movement a wave of momentum few could have ever anticipated.

In the year since the Supreme Court’s 5-4 decision, which found Section 3 of DOMA unconstitutional, marriage equality hasn’t lost a single day in court. Federal courts have ruled in favor of marriage equality in Utah, Ohio, Oklahoma, Kentucky, Idaho, Illinois, Indiana, Michigan, Pennsylvania, Tennessee, Texas, Virginia, Oregon, Wisconsin and on Wednesday Indiana. On Wednesday as well the 10th Circuit Court of Appeals reaffirmed a lower court’s ruling that Utah’s same-sex marriage ban is unconstitutional. State courts in Arkansas, New Jersey and New Mexico have also sided with marriage equality. In every instance, judges have cited some aspect of the Windsor decision in their rulings. But the decision has also been broadly implemented across the federal government by the Obama administration, resulting in real world and practical impacts for gay Americans when it comes to joint tax returns, military and Social Security benefits and a broad swath of other federal rights and benefits.

Speaking to Metro Weekly hours before she and Windsor would introduce President Barack Obama at an LGBT fundraiser for the Democratic National Committee in New York City, Kaplan, who goes by Robbie, says she never could have dreamed the case she brought with Windsor would help turn the tide of history for marriage equality.

“Once you say gay people have equal dignity it’s pretty hard to come up with any good reason for why they shouldn’t be treated equally under the law,” Kaplan says.

Now, with same-sex marriage legal in 19 states, plus D.C., and every other state facing legal challenges to their respective same-sex marriage bans, it increasingly appears simply a question of when the Supreme Court will provide the marriage-equality movement its long sought national resolution.

METRO WEEKLY: Who is Robbie Kaplan?

ROBERTA KAPLAN: I grew up in Cleveland, Ohio in the late ’70s and ’80s. My uncle was in the Peace Corps in India when I was a young kid and I spent a lot of time hanging out with my mother’s mother, my grandmother. We were very close. And she wrote him a letter when he was in India saying that one day she said to me, “Robbie, why is it you just can’t stop talking. You talk all the time!” And she reports in the letter that I said something like, “Grandmother, I just can’t help myself. I just love to talk.” So I think that’s probably the age when my destiny was set in terms of my future career path.

When I was a little bit older, around ten or so, my mom had a subscription to New York magazine and The New Yorker and I remember reading those and thinking to myself, this is where I want to live. I want to move to New York. So around the age of 10, I put a plan in place to move to New York, which eerily enough I then followed through with.

And part of the plan to move to New York was to go to an Ivy League college and then go to law school in New York. And that’s pretty much exactly what I did. I went to Harvard undergrad and then I went to Columbia Law School.

MW: How did you and Edie Windsor meet?

KAPLAN: What had happened after Thea died, Edie realized she was going to have an estate tax problem, I think, but she didn’t realize the enormity of it. And once she did, she was indignant. She wanted to find someone to take her case.

So she went around looking for lawyers. Fortunately for me she was turned down by some of the gay civil rights groups. And as a result, she has a good friend who actually helped she and Thea to go to Toronto to get married and he is friends with a friend of mine. He said Edie was looking for a lawyer, and my friend said he knew just the person and my friend called me and asked if I would give her a call, and that’s what I did.

MW: What kind of state was she in when you first met her?

KAPLAN: It had been about three months since Thea had passed when we met. Edie had had a terrible heart condition. She had a heart attack after Thea died, apparently from what they call “broken heart” syndrome. But after that she had recovered and she had actually gone on a tour with the movie to a couple cities at this point, so she was in good spirits.

I didn’t know Edie at all, but I knew who Thea was before I met Edie because if you were a lesbian and you were looking for a lesbian psychologist back then everyone said go to Thea Spyer. So I knew who she was. She only lived four blocks away, so I went into her apartment and it literally took me seconds to decide it was the perfect case.

MW: What convinced you to take the case?

KAPLAN: First of all, her story. Talk about a marriage. This was a marriage. Forty years, an incredible life together through an incredible time. On top of that you have Thea’s horrible illness and the fact that she was essentially paralyzed for much of their time together and who wouldn’t want to have a spouse like Edie Windsor? None of us know if something like a terrible illness is going to happen to us or not. But the one thing we all do know is, God forbid it happens, that we sure as hell would like to have a spouse like Edie Windsor there to help us.

So I thought it was just an incredibly powerful story. It turns out there were facts about Edie’s life even before she met Thea that I didn’t know at the time, that I didn’t learn of that day, that became I would say almost as important. Like the story about her FBI interview in the ’50s when she was petrified they were going to ask her if she was a lesbian and she’d lose her job. Things like that.

And on top of all that, you have this incredible woman. She’s brilliant and charismatic and charming. That doesn’t hurt either.

MW: A few months after you filed the case, the Obama administration announced they weren’t going to defend the constitutionality of DOMA anymore. Was that something you had been expecting and how important was that to your case?

KAPLAN: I have to say, for me it is possibly the single most surprising thing that happened in the case. Surprising because it happened, it’s happened from time to time, but it is a very big step for a president and a Department of Justice to say that they are no longer going to defend the constitutionality of a federal statute.

We knew that this case would cause them to consider this. But when the president decided to do that, I had tears streaming down my face. And I really believe in my heart of hearts that it’s not a coincidence that it was three African-American guys — [President Barack Obama, Attorney General Eric Holder and Assistant Attorney General of the Civil Division Tony West] — who made that decision. I think they sat down and they said to themselves, “This is what we would have to say if we were going to write a brief saying that gay people shouldn’t get heightened scrutiny and we’re not willing to say this. As three African-American men, we will not put that down on paper.”

It was both incredibly surprising and incredibly principled, and for me it’s very much an example that we can’t all be too cynical. We think all the time that everything that happens in D.C. is part of some big inside political game, but I really believe this was a decision made based solely on principle and based on the Constitution.