Ape S**t – “Dawn of the Planet of the Apes” review

It’s cliched world-gone-mad in the latest Planet of the Apes.

Perhaps The Simpsons said it best, when Troy McClure starred in the musical Stop the Planet of the Apes, I Want to Get Off! By that point, the magic of the original film had long since been tarnished by its sequels — there were four of them — which came fast and furious, each more middling than the last as the creation of this new ape world order was explained by way of a time paradox that put the notion of “the chicken or the egg” to shame. 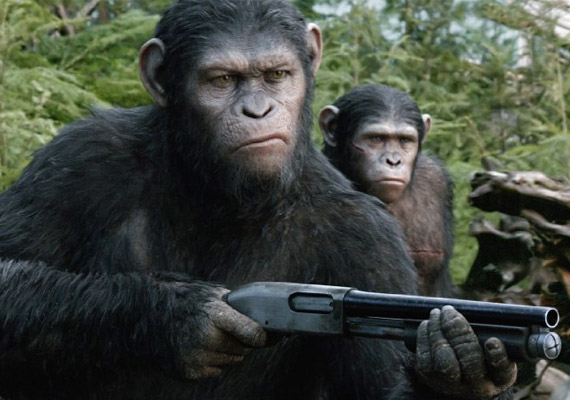 Dawn of the Planet of the Apes

I’ve no issue with Hollywood attempting to tell the PotA story from a different, more plausible point of view. With 2011’s Rise of the Planet of the Apes, director Rupert Wyatt did just that, eking out an emotionally resonant tale of a scientist (James Franco) and Caesar (Andy Serkis, in motion-capture mode), the genetically modified, super-intelligent ape he inadvertently gives rise to. You could forgive the artificial feel of the CGI apes (nothing will ever replace the sheer ingenuity of the original’s makeup) because the core story clutched at the viewer’s emotions as tightly as a hungry chimp clutches a banana.

The sequel, Dawn of the Planet of the Apes (

), directed by Matt Reeves, also grips you, but this time in the jaws of boredom. The CGI has improved, the robust action set-pieces are outsized — both a byproduct of an increased budget — but the movie is written as though clichés were the stuff of Oscar gold. 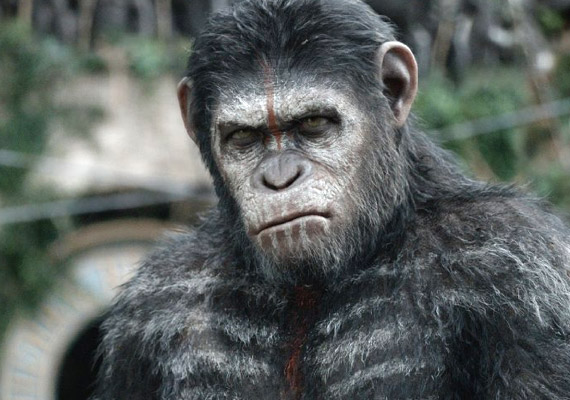 Dawn of the Planet of the Apes

Ten years have passed and an unimaginable number of intelligent monkeys are doing their business in the Muir Woods, where they’ve displayed talent for grand architectural design. When humans — most of whom were killed by the same man-made virus that allowed the monkeys to evolve — reemerge, battle lines are drawn. Who do you think comes out on top? (Hint: “Planet of the Humans” has no zing.) The movie strives for sociological depth in the peace-loving Caesar’s somber realization that not all apes are good and not all humans are bad. A spider monkey could have written a less obvious screenplay.

Dawn exists solely as a plot mover: it needs to force its major players into position for what is currently known on IMDB as Untitled Planet of the Apes Sequel, a title I pray they keep. Eventually, apes will prevail, develop British accents, and clothe themselves in drab-colored leisure suits. Then, Charlton Heston (or maybe Mark Wahlberg) will arrive from the past to bark that now-legendary imperative, “Get your hands off of me, you damn, dirty ape.”

In 1968, the sight of marauding, talking simians on horseback, wrangling humans, was the stuff of which a 10-year-old’s science fiction dreams are made. It was evolution upended, a Darwinian practical joke. But with the Dawn of the Planet of the Apes, the joke’s on us.

Dawn of the Planet of the Apes (rated PG-13 for violence but no monkey business) is now playing at area theaters.

Randy Shulman is Metro Weekly's Publisher and Editor-in-Chief. He can be reached at rshulman@metroweekly.com.
← Previous Story Magnificent Maleficent
Next Story → New Movies for August 2014 (Trailers)