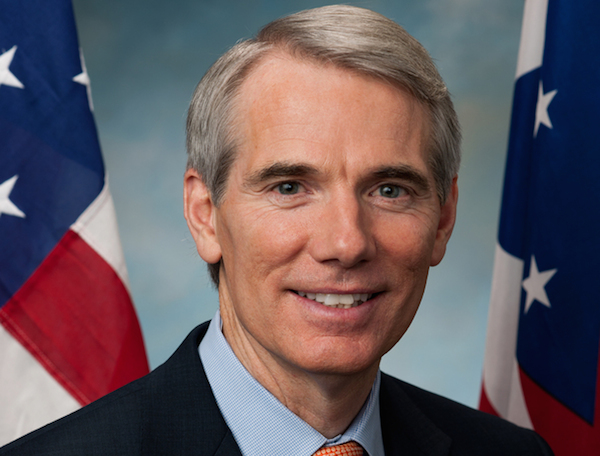 Rob Portman, the first Republican senator to openly support same-sex marriage, is leaving the door open to a possible run for president in 2016.

In an interview with The Washington Post published Tuesday, Portman acknowledged he has been encouraged to consider a run for president and indicated his support for marriage equality might help his candidacy.

“I’m not particularly eager to do it myself, and having been involved in six presidential campaigns, I know what it’s like,” Portman said. “But if nobody running is able to win and willing to address these issues, then I might have a change of heart.”

Portman also said his support of same-sex marriage at a time when the GOP is attempting to increase their outreach efforts has enabled him to better connect with young voters, who are more inclined to support same-sex couples’ right to marry.

“It has opened the door for a broader conversation on economic and fiscal issues,” he stated. “You can’t become a national party unless you do a better job reaching those between 18 and 30. They are the voters of tomorrow, and we want them to listen to us on jobs and Obamacare.”

Portman continued, “Some people say, ‘I don’t care about that, I care only about the marriage issue,’ and I get that, but we’ve got to show respect for both sides. Respect is important — respect for people’s religious views, respect for personal experience. It should be a sincere and healthy dialogue.”

The Ohio Republican’s remarks come as Cleveland has been selected as the location of the 2016 Republican National Convention. GOP leaders had also been considering Dallas as their host city, located in a state that’s Republican Party just recently endorsed “ex-gay” or “reparative” therapy in their official party platform.

According to Gregory T. Angelo, executive director of Log Cabin Republicans, holding the convention in Texas would have been a “PR nightmare for the RNC.”

“It’s simple: the 2016 Convention came down to a state with a Republican Senator who supports marriage equality versus a state where the GOP endorsed snake oil therapy to turn gay people straight,” Angelo told Metro Weekly. “Cleveland can thank Senator Portman for pushing for the Ohio selection, and Dallas can thank [Texas Eagle Forum President] Cathie Adams and the nutjobs on the Texas GOP Platform Committee for blowing their chances.”

Portman announced his support for same-sex marriage in March 2013, about a week before the U.S. Supreme Court heard arguments in challenges to the Defense of Marriage Act and California’s Proposition 8. Portman, who was on the shortlist to become Republican presidential candidate Mitt Romney’s running mate, said his evolution on the issue came after his son, Will, came to him two years earlier as a freshman at Yale University. Portman has also said he does not believe being gay is a choice.

“After considering what [Will] told me and talking to a lot of folks who are involved in this issue — I was never frankly involved in it, maybe I should have been, but I never thought deeply about it — that it seems to me that to the extent it’s not a choice, which is what I believe, that as Republicans you’ve got to treat people as they are,” Portman said during an interview last month with Hoover Institution fellow Peter Robinson.

Serving in the House of Representatives from 1993 to 2005, Portman voted for DOMA in 1996, which defined marriage as between a man and a woman for federal purposes until that definition was declared unconstitutional by the Supreme Court in June 2013. He also supported a constitutional amendment banning same-sex marriage and voted against same-sex couples’ right to adopt children in D.C.

Since Portman’s endorsement of same-sex marriage, three of his Republican colleagues in the Senate have followed his lead: Mark Kirk of Illinois, Lisa Murkowski of Alaska and Susan Collins of Maine. Portman and those three senators all voted to outlaw LGBT workplace discrimination when the Senate approved the Employment Non-Discrimination Act in November.

Although the Republican Party’s opposition to LGBT issues has softened, Portman marks the first GOP supporter of same-sex marriage to express interest in a 2016 run for president. Indeed, having a presidential candidate who supports marriage equality onstage at a Republican primary debate would be a historic first, and possibly a game changer for American politics.

“It probably makes it difficult for me to win a primary election at the national level, but we’ll see,” Portman told the Hoover Institution’s Robinson. “If someone else steps up and has these ideas to be able to reform our economic system, have the Republican Party be a bigger tent party to be able to reach these communities that we talked about earlier, then I’ll stay in the United States Senate, which is what I plan to do. But I’ll be watching and seeing who runs and what happens.”