By Randy Shulman on August 7, 2014 @RandyShulman

Portrayed by the willowy Taylor Schilling on Orange is the New Black, Piper Chapman is a woman in her 30s whose upper middle-class, privileged life is pulled from beneath her after a felony drug conviction from a reckless escapade in her 20s lands her in a minimum security women’s prison in Connecticut. Her story is the centerpiece of about a dozen or so narratives that envelope the inmates of Litchfield Prison. Those stories have gripped audiences, making the Emmy-nominated series the latest in a string of unlikely hits for Netflix, whose non-traditional approach to content distribution has taken the broadcast and cable industry by surprise. With just two seasons under its belt, OITNB has become the show du jour, the one everyone is buzzing about. Forget House of Cards and the White House, women’s prison is where the real action’s at.

Produced by Jenji Kohan (Weeds), the series is based on the memoirs of Piper Kerman, and where it features Kohan’s patented brand of narrative twists and frequently implausible (yet compelling) machinations, the book is relatively straightforward in its frank, first-hand exploration of prison life.

Kerman has dedicated her post-prison life to reforming the country’s criminal justice system, which she sees as being in a serious state of disrepair.

“Sentencing reform is one of the most important things to me,” says Kerman. “It is important to send fewer people to prison or jail in the first place — or in some cases with just shortened sentences. It’s very important we stop the faucet.”

METRO WEEKLY: How does it feel to you to watch your book brought to life? What’s the experience like?

PIPER KERMAN: I feel incredibly fortunate to have had the opportunity to write the book and have it published. Not everyone coming home from the criminal justice system has the same opportunities that I’ve enjoyed. And I feel incredibly fortunate that Jenji Kohan was interested in the material. What’s important to me is what Jenji and her team do, which is to insist on the humanity of all those characters. And that is absolutely the most essential thing. Fidelity to the original material is not what’s most important to me. It is very important to me that they create a real world in Litchfield Prison and that it’s a believable, realistic world in terms of a federal minimum security women’s prison. So, yeah, I just feel really grateful.

It’s also absolutely incredible to see the response that folks have had to Laverne Cox and to the character Sophia Burset. It is totally, totally inspiring to see the love that both Laverne and the character have received.

KERMAN: I called her Vanessa in the book, the transgendered woman who was incarcerated with me, who was my neighbor a foot away in B Dorm. And she was just a really important person. She was a really interesting, fascinating person in her own right, but also the response of that community of women behind bars to her presence there was also very interesting. It just said so much about different facets of the community. To see Jenji Kohan take Vanessa in the book and create the character of Sophia Burset and to see that character brought to life by someone so dazzling as Laverne Cox — I can’t overstate how incredibly satisfying that is.

MW: There seem to be a lot of departures from the series and the book.

KERMAN: From the very first episode of the first season there are dramatic departures from the book. The thing that they have done in both the first and second season is that they have drawn on set pieces, or in some cases storylines or characterizations from the book, and have taken them in all kinds of interesting directions. I sometimes say that they take the book, put it in a blender, throw a lot of extra ingredients in and then press “liquify.”

And I think that’s great. It’s very interesting to watch something transition from one medium to another because a book is a really different thing than a TV show. A book is more introspective. Internal conflict is a much bigger part of my book than what you see on the screen and that is inherent in the medium. And I think the reason I was really excited about the book being adapted into a series is because of the intimacy that the audience feels with the characters who they invite into their lives again and again and again.

MW: There hasn’t been a false note in the series. Strike that — actually there’s one. The character of Larry in the second season. His storyline doesn’t ring true. I get it, but I don’t believe it. It kind of harms the dramatic authenticity of the series, stretching the limits.

KERMAN: Well, I hear you. One of the biggest departures from my book is the depiction of Larry. I’m in fact married to Larry Smith. We’ve been married for eight years and have been together for 18, so that’s a pretty big difference from the show. And the depiction of my family is very different from the reality of my family. And that’s okay because they’re trying to create conflict — and something that filmed entertainment really needs is interpersonal conflict.

MW: It’s extraordinary you and Larry made it through the period.

KERMAN: Larry is an amazing human being. He was a rock. He was incredibly steadfast. I spent six years between being indicted and actually being sent to prison. And I wouldn’t say that was more difficult than the year in prison, but it was extremely difficult times because I knew I would go to prison. Imagine putting your life on hold and waiting to go to prison for six years. Larry was just heroic during that period. For people in the criminal justice system and people who are locked up in prisons and jails, their connection to their loved ones, their family, their friends, their lovers or spouses — those are the things that are sustaining and that get you home safely and successfully.

MW: It’s interesting that you bring that up because some of the most touching moments in the show take place in the visiting room.

KERMAN: The visiting room is the most important room in any prison or jail. Absolutely.

MW: Do you stay in contact with your fellow inmates?

KERMAN: I stay in contact with many of the women I did time with from Danbury, and I really treasure those friendships. A lot of people have come home very successfully and have moved forward in their lives in all kinds of directions. A small number of people have gone back to prison and that’s really heartbreaking, because I find it very unnecessary or avoidable.

MW: Have you gotten response from them on the book or show?

KERMAN: I’ve gotten very lovely feedback from them for the book and very enthusiastic feedback for the show, as well. Of course, the folks who actually lived it, if they wrote a book about their own experience, even though they were in the exact same prison at the same time, those books would be different, they would have their own different perspectives on things. Think about the book as a document of truth and the show as a representation of truth.

MW: In Season 2, Piper changes from the wide-eyed newbie and actually toughens up quite considerably. How did prison change you as a person? What good did it bring to you? What bad?

KERMAN: The experience of incarceration will change you while you’re incarcerated and it will change your perspective on the world even after you’ve come home. Which is why we should be concerned about the conditions of persons in jail because they are traumatizing, brutalizing places. And we have 700,000 people coming home from jail every year in this country and they hit the streets traumatized and brutalized. That’s not very good for our communities or public safety.

The single most important thing I cannot stop thinking about when I think about my own experience is the fact that this country’s criminal justice system is a crucible of inequality. We expect every American to be treated equally in a court of law, but you just have to look at the data and you’ll know that’s not true. Those disparities are true for people of color, they’re true for poor people, and they’re also true for LGBTQ people. LGBTQ youths, especially, are disproportionally targeted and incarcerated by the justice system, and what happens to our young people when they have contact with the criminal justice system can have a really significant imprint on the rest of their lives.

Those things are very important to keep in mind, especially for big fans of the show. Just remember that the show is a reflection of the real world and that the characters are grounded in real people. I met the warden of a very large midwestern women’s prisons this year and she said, “Oh, we love the show. We’ve got a Crazy-eyes, we’ve got a Pennsatucky.” 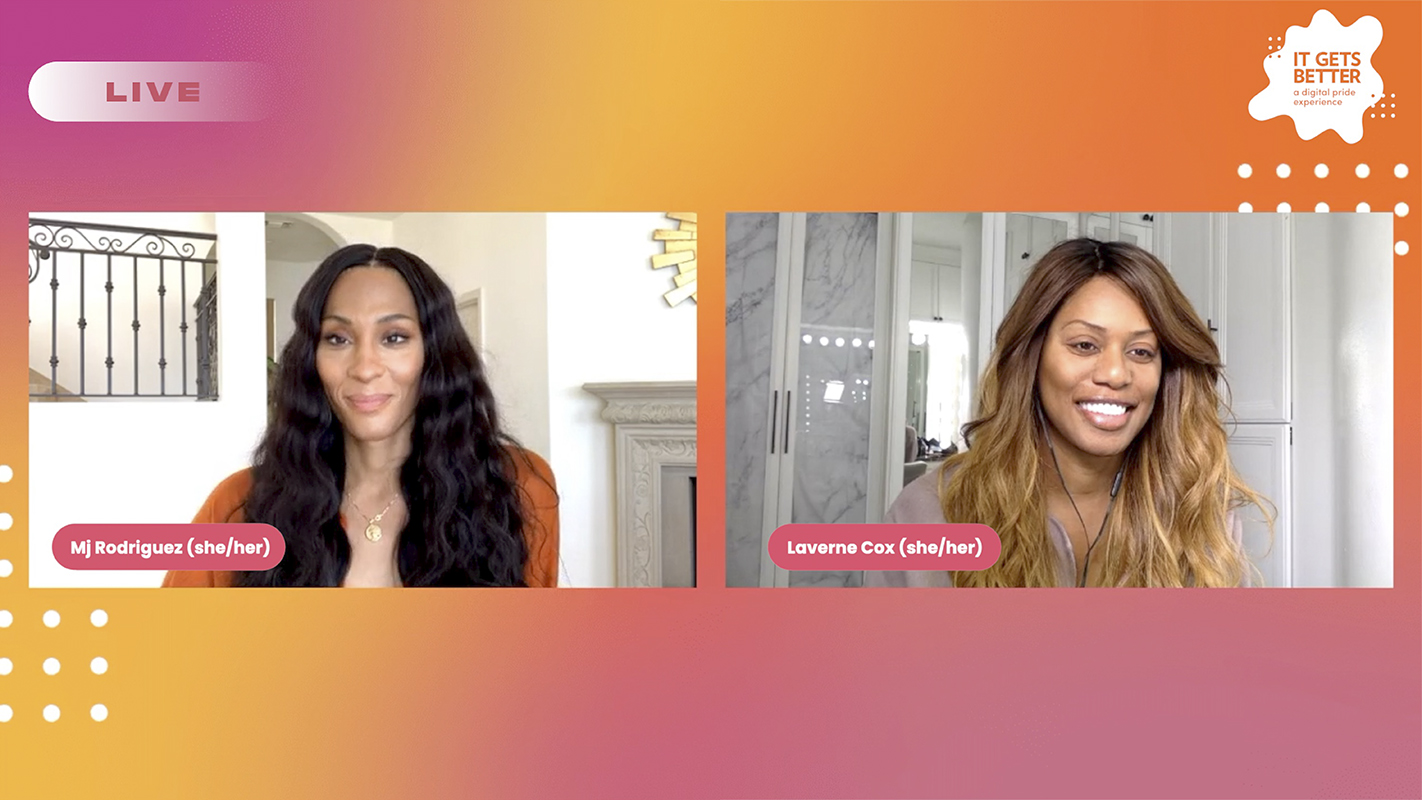