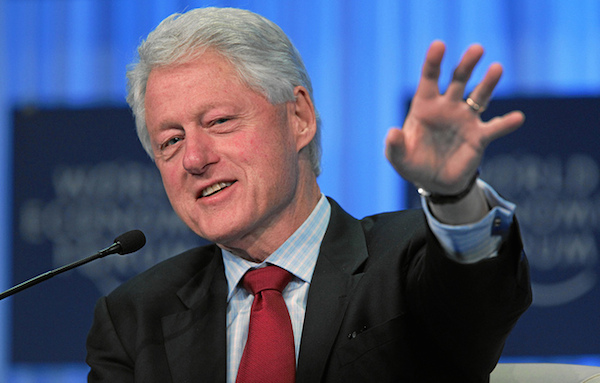 “President Bill Clinton is a transformational leader for our nation and the world,” said HRC President Chad Griffin, who served in the press office of the Clinton White House, in a statement. “His ability to build partnerships around the globe and harness the power of human potential is truly remarkable, and we are thrilled he will be returning as our keynote speaker for our national dinner.”

According to HRC, Clinton returns to the annual fundraiser on Oct. 25 after attending HRC’s first national dinner in 1997.

Clinton has worked to restore his LGBT-rights legacy since leaving the White House. The Defense of Marriage Act (DOMA) defining marriage as between a man and a woman for federal purposes, which Clinton signed in 1996, was partially struck down by the U.S. Supreme Court as unconstitutional in June 2013. Before oral arguments were heard by he high court over DOMA’s constitutionality in March 2013, Clinton penned a column for The Washington Post calling for the law to be struck down.

“As the president who signed the act into law, I have come to believe that DOMA is contrary to those principles and, in fact, incompatible with our Constitution,” he wrote.

Clinton’s administration also approved “Don’t Ask, Don’t Tell” in 1993 as a compromise with Congress to the full ban on gay servicemembers that existed when Clinton entered the White House. Gay people would be allowed to serve under Clinton’s compromise, but by sharing their sexual orientation they faced discharged. And discharged they were, with more than 14,500 LGB servicemembers fired under the discriminatory ban before it was repealed by Congress and President Barack Obama in 2011.

Clinton’s appearance also comes as speculation continues to swirl around whether his wife, former Secretary of State Hillary Clinton, will again run for president in 2016. Hillary Clinton, who announced her support for same-sex marriage in March 2013 in a video statement released by HRC, has also faced questions about her support for marriage equality. During a recent interview with NPR, Clinton defended her decision to only endorse same-sex marriage in March 2013, shortly after leaving her position as secretary of state, and denied that she hid her support for marriage equality for political gain. “When I was ready to say what I said, I said it,” Clinton stated. Most notably, Clinton also said she believes marriage should be left up to the states and expressed her support for state-by-state efforts to secure marriage equality, a position that contradicts the majority of marriage-equality advocates who believe a national resolution must come from the Supreme Court.

It is not yet clear if Hillary Clinton will also attend next month’s event.