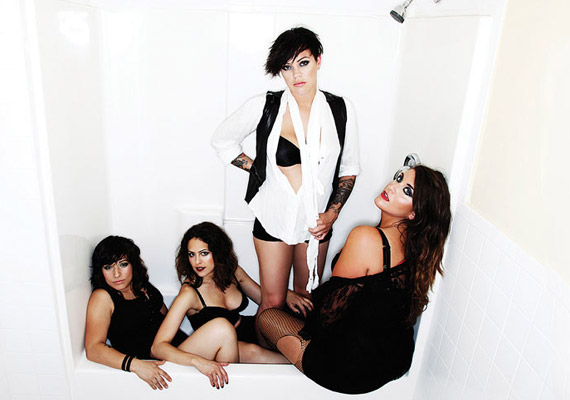 The ladies of Hunter Valentine may be reality-TV stars now, twice over. But the band’s founder Kiyomi McCloskey hasn’t forgotten where she came from, or those who’ve supported her since the early days.

“It’s sort-of become an annual thing for us,” McCloskey says about playing PhaseFest at D.C.’s Phase 1. “We really love playing PhaseFest. It’s intimate and it gets wild…. It’s kind of like every musician’s favorite kind of show.

“It’s been exciting every year to see it grow and evolve,” she continues. Of course, PhaseFest regulars can say the same thing about McCloskey’s band. Over the last decade, Hunter Valentine has sprouted from a once-gritty part of downtown Toronto, where McCloskey grew up with very supportive parents, into a Brooklyn-based rock band that two years ago were the stars of season three on Showtime’s The Real L Word. This summer they were featured on Vh1’s songwriting-focused Make or Break: The Linda Perry Project. The band recently released the single “Burn With It,” which gets a great live response since so many fans got to see it get made.

The stop at PhaseFest is part of a new round of Hunter Valentine’s tour with the Minneapolis-based all-female band Sick of Sarah, dubbed The Ladykillers Tour. “It’s part of reclaiming that term in an empowering female way,” McCloskey says, “like a ladykiller to us is somebody who takes control and takes charge.” Someone like Cyndi Lauper, who picked Hunter Valentine to be her opening act on last year’s She’s So Unusual: 30th Anniversary Tour. “That lady is one of the hardest-working people in the music industry, I swear,” McCloskey says. “She is such an inspiration.”

McCloskey is working to establish a music studio for queer youth, a nod to Lauper’s shelter for struggling LGBT kids. “Music is my favorite form of therapy,” McCloskey says. “So I want to start a community charity music studio, where young kids can go and record songs and get their emotions out in musical form.” — Doug Rule