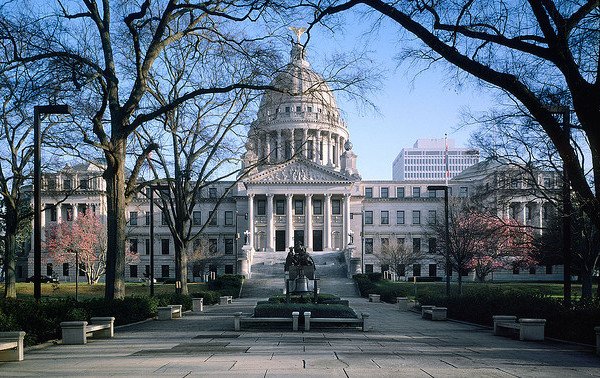 A federal judge found Mississippi’s ban on same-sex marriage unconstitutional in a ruling handed down Tuesday.

U.S. District Court Judge Carlton Reeves ruled Mississippi’s same-sex marriage ban violates the Due Process and Equal Protection Clauses of the Fourteenth Amendment because it denies same-sex couples and their children equal dignity under the law and subjects gay and lesbian citizens to second-class citizenship.

“The Fourteenth Amendment operates to remove the blinders of inequality from our eyes,” the ruling states. “Though we cherish our traditional values, they must give way to constitutional wisdom. Mississippi’s traditional beliefs about gay and lesbian citizens led it to defy that wisdom by taking away fundamental rights owed to every citizen. It is time to restore those rights.”

Reeves stayed his decision for 14 days to allow the state to appeal to the 5th Circuit Court of Appeals or the U.S. Supreme Court for a longer stay.

The decision by Reeves reads in part:

It has become clear to the court that people marry for a number of reasons: marriage is a profound source of emotional support; marriage is a private and public expression of commitment; some marry in exercise of their religious beliefs; some do so because it opens the door to economic and government benefits; there are those who marry to present a certain status or image; and others do it for the noble purpose of legitimizing their children. In reviewing the arguments of the parties and conducting its own research, the court determined that an objective person must answer affirmatively to the following questions:

Answering “Yes” to each of these questions leads the court to the inescapable conclusion that same-sex couples should be allowed to share in the benefits, and burdens, for better or for worse, of marriage.

The federal court decision out of Mississippi marks the second today striking down a same-sex marriage in a southern state. Earlier Tuesday, a federal judge found the ban on same-sex marriages in Arkansas unconstitutional.