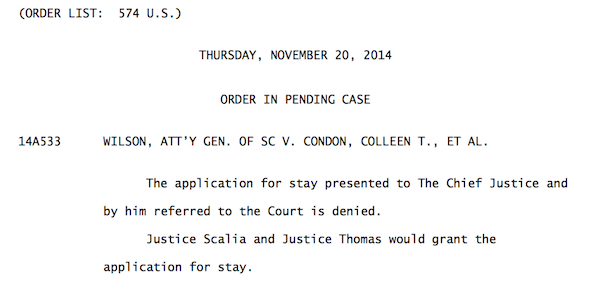 The U.S. Supreme Court declined to stop South Carolina same-sex marriages from beginning Thursday in a brief order handed down hours before a lower court’s stay was set to expire.

South Carolina Attorney General Alan Wilson had asked Chief Justice John Roberts to stay same-sex marriages in the state after the 4th Circuit Court of Appeals denied a similar request on Tuesday. Roberts, who oversees the 4th Circuit, referred the request to the full Supreme Court.

The order released Thursday noted that Supreme Court Justices Antonin Scalia and Clarence Thomas would have granted the stay. Last week, when the Supreme Court declined to halt same-sex marriages in Kansas, the two conservative justices also noted that they would have issued a stay.

On Nov. 12, U.S. District Court Judge Richard Mark Gergel found South Carolina laws prohibiting same-sex couples from marrying “unconstitutionally infringe on the rights of Plaintiffs under the Due Process Clause and Equal Protection Clause of the Fourteenth Amendment of the United States Constitution and are invalid as a matter of law.” Although Gergel denied a stay pending appeal due to the unlikelihood that the South Carolina ban will be upheld, he did grant a temporary stay until noon on Nov. 20 to allow South Carolina’s attorney general to petition either the 4th Circuit or the U.S. Supreme Court for a longer stay.

South Carolina is one of the states in a circuit impacted by the U.S. Supreme Court’s decision last month declining to hear arguments in cases challenging same-sex marriage bans in five states — Utah, Oklahoma, Virginia, Indiana and Wisconsin — thus allowing lower court decisions legalizing marriage equality in those states to stand. Because the Supreme Court left intact rulings by the 4th Circuit, 7th Circuit and 10th Circuit Courts of Appeals striking down same-sex marriage bans in those five states, those appeals courts’ decisions applied to six other states in those three circuits: West Virginia, North Carolina, South Carolina, Kansas, Colorado and Wyoming. Although some of those states have been quick to comply, South Carolina had sought to defend the state’s same-sex marriage ban.

Appeals court rules 2-1 that Colorado's Anti-Discrimination Act has an interest in protecting LGBTQ residents from discrimination.

A federal appeals court has ruled against a graphic designer who sued the state of Colorado in an attempt to overturn a law prohibiting anti-LGBTQ discrimination in public accommodations.

Lorie Smith, the owner of 303 Creative, creates graphic designs and websites for houses of worship, political candidates, and weddings, as well as other clients. She claims she will do work for LGBTQ clients, but that her religious beliefs prevent her from creating custom wedding websites for same-sex nuptials or "promoting events, products, services, or organizations that are inconsistent with my religious beliefs," according to the company's website.