Grim Fandango may not be the most in-depth of remasters, but it’s a genre classic definitely worth revisiting 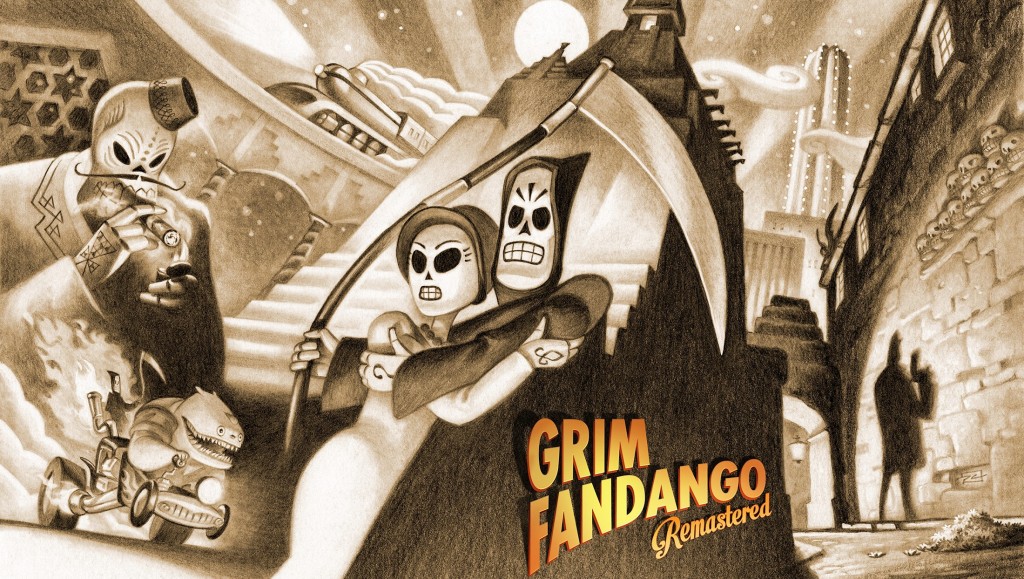 It’s become very du jour of late to remaster older games. Whether for nostalgia, profit, or both, developers are digging through their back catalogs to find titles worthy of a quick spit ‘n’ shine to give a new round of players — and those who fondly remember the original — a chance to experience an older game. That’s not to say it’s limited to the classics: GTA V, Saints Row IV and Sleeping Dogs, for instance, have all recently been “remastered” from the PS3/360 to run on the PS4 and Xbox One, letting their respective publishers wring every last cent from gamers on all four systems.

There are, thankfully, more than a few titles that are genuine remasters. Take Oddworld: New ‘n’ Tasty!, last year’s PS4 remaster of the cult classic Oddworld: Abe’s Oddysee, which saw an updated game engine and so much polishing that, in many ways, it’s a vastly superior game to the 1998 original. Or, for horror fans, the seminal classic Resident Evil, which was released in 1996 on the original PlayStation, remastered in 2002 for the GameCube, which in turn was then updated in high definition for a 2014 release on current gen consoles. Both took established, older franchises and pulled them into the modern era, giving young gamers a chance to live through the same worlds their parents did almost two decades ago without vastly altering the original experience.

Developers must walk a fine line when remastering a beloved title. Do too little, and the game’s age will be all too apparent for those used to modern control schemes and pixel-perfect graphics. Resident Evil’s tank controls, for instance, feel utterly alien in today’s world. Do too much, and you risk ruining the magic that earned the game its classic status, by potentially transforming its world to be unrecognizable or fiddling too much with game mechanics. That’s why, at first glance, Grim Fandango Remastered looks as if developer Double Fine didn’t really bother at all.

Let’s walk through the list of changes. Character models are overhauled, with smooth textures that will render well on any size screen, a new lighting engine subtly illuminates everything in a more realistic way, backgrounds have been cleaned up to let them better stretch across 1080p screens, and there’s better anti-aliasing to smooth everything out as you play. Audio has been updated and remastered, with the game’s beautiful score recorded by the Melbourne Symphony Orchestra (the original game’s audio files didn’t hold up to modern scrutiny). And that’s about it. Grim Fandango still runs at a 4:3 aspect ratio (it can be stretched across a 16:9 aspect, but don’t bother) and, aside from the option to point and click on PCs and the PS Vita, or use camera-relative movement on PS4, instead of the original’s tanks controls, this is essentially the same game you played back in the nineties.

Which is exactly why it’s still so utterly fantastic. Everything that gave the original game its cult status is here. Often revered as one of the hallmarks of the adventure genre, which was at its peak in the late ’80s through the mid-’90s, Grim Fandango is a beautifully realized, wonderfully scripted, gorgeously depicted world to explore.

Players are given control of Manuel “Manny” Calavera, a travel agent in the Land of the Dead who helps souls move from the Land of the Living on to the Ninth Underworld. Manny determines how good each person was while alive, with those leading better lives able to access better travel packages for reaching the Ninth Underworld. The Number Nine train is the ultimate reward, capable of reaching the gates of the Ninth Underworld in four minutes, while boat and bus packages are also available. Those who failed to lead a good life must make the journey on foot, and are thus resigned to a four year journey to reach their destination.

When a computer error fails to assign the Number Nine train to Mercedes “Meche” Colomar, it’s revealed that the entire system is corrupted — someone is stealing the tickets assigned to good souls, leaving those who qualify for the train to walk the four year journey. Manny heads off in search of Meche to rescue her and ensure she secures her place on the train to the Ninth Underworld — and hopefully make it there himself in the process.

If it sounds convoluted, don’t worry. The now-defunct LucasArts, the original developer, and the game’s director Tim Schafer crafted a rich, inviting world that instantly draws you into its narrative. Seventeen years later, the witty, snappy script still shines, and Manny’s interactions with his environments and the various characters within them ensure that the game’s plot is always apparent and appreciable. Inspiration for the game comes from various sources: film noir, especially in the second year of the story, Mexican calaca figures (on which most characters’ designs are based), and the Day of the Dead celebrations, as well as art design from the Art Deco period.

It’s easy to see why the game itself has needed such little remastering. The vast majority of environments Manny encounters are pre-rendered, and the original art style holds up beautifully today — though cutscenes, which aren’t remastered, are definitely showing their age. There are other sore spots, such as water movement or the propellers on a blimp, but for the most part the game’s various scenes — whether the cityscape of El Marrow or the precarious island setting of the third chapter — look as good now as they ever did. Double Fine knew that what they had was more than enough — they updated the parts that needed it most, such as character design and audio, and left everything else that worked intact.

For the most part, that’s a good thing. As noted, conversations are excellent, thanks to the hilarious script and strong performances from the voice actors. It’s the game’s core gameplay — namely, the adventuring — where you might take issue with Grim Fandango. I’ll say it now: I’m terrible puzzles. While I like to think that I’m a competent gamer, put a challenging puzzle in front of me and — if I don’t know what to do — I’m likely to cry and then lose interest. As a result, Grim Fandango would, on the surface, seem to be one of the worst games I could have played, because not only does it have puzzles that can be infuriatingly hard, they’re also ones that occasionally have utterly illogical solutions. I had to resort several times to a walkthrough in order to move through some of the scenes in the game — and while more often than not I would read the solution and realize that I was an idiot, there were several which made no sense even after completing them. (I still have no idea how I was supposed to work out the betting stub for the cat races.)

Grim Fandango’s control scheme doesn’t help matters. Yes, tank controls are gone (though, for the sadists among you, it’s possible to reactivate them in the settings) but, at least on console (my review was on PS4), the new camera-relative settings aren’t fantastic. Too often I’d enter a new area only for the camera to have switched perspective, which meant the direction I was pressing when I entered the room would either send me in the wrong direction or turn me back around and out of the area. Contextual awareness isn’t great, either, with no UI hints other than Manny turning his head to notice relevant objects or characters (which can be buggy if several items are close together) or the occasional dialogue snippet. That can make moments where you need to use an item a game of trial and error — interacting with various people and objects while holding numerous different items to find a combination that works will be a core part of your Grim Fandango experience. Double Fine also failed to patch in auto-saving, which is a somewhat egregious error for lazy modern gamers — it’s not exactly laborious to manually save, but it just makes sense to have baked it in here.

Of course, none of the above matters because, in the six or so hours I spent in the Land of the Dead, I couldn’t have cared any less about control issues or obtuse puzzles or control problems. It’s both impressive and depressing that, in seventeen years, few games can match Grim Fandango’s fully-realized and beautifully executed world. Manny is the perfect protagonist: he’s likeable, witty, and you’ll want to see his story to its conclusion. Every character you meet is memorable, from main characters such as Glottis, a spirit demon Manny befriends who accompanies him throughout the game, Domino, Manny’s swaggering arch-nemesis, and Hector LeMans, the game’s main antagonist who masterminds the plot to steal Number Nine tickets, through to side characters met throughout the game such as poetry-reading Olivia, security guard Carla, and oily lawyer Nick. Yes, the game’s puzzles may be tough, but when they require you to talk to so many fantastic characters, it’s utterly forgivable.

Grim Fandango succeeds today because it refuses to apologize for what it is: a game born and bred in the ’90s. Any problems with its control scheme or layout or puzzle structure are issues that many games suffered from at that time — but it doesn’t stop it being a memorable classic. Yes, there were times I had to seek help to advance through an area (and, of course, your mileage will vary if you’re not an incompetent fool like I am), but there were also moments of pure elation when I successfully deduced the solution to a puzzle without a walkthrough and was rewarded with more story, more dialogue… more Grim Fandango. Year 2 alone, and the port town of Rubacava, is a sprawling mess of a level that’s breathtaking in scope, maddening in execution, and utterly brilliant. That this game is seventeen years old and still manages to be so wondrously playable is a testament to the design conviction of Tim Schafer and company when they built it.

As a remaster, Grim Fandango won’t win any awards. The changes here are so subtle as to be virtually nonexistent, especially in the face of other, more thorough efforts. But that’s missing the point, as there wasn’t much about Grim Fandango that needed a modern rethinking. The original sold in tiny numbers, but was still able to become one of the definitive examples of the adventure game genre — what’s here is truly special, and I’m completely okay with Double Fine taking as light an approach as possible with its updating for today’s gamers. No, it’s not perfect, but it doesn’t have to be. The mere fact that you can play it at all (the PC original is notoriously difficult to get running on modern systems) is something worth celebrating, and I urge you to journey to the Land of the Dead. Whether it’s a return trip, or a first vacation, you’ll love your stay regardless.

Rhuaridh Marr is Metro Weekly's online editor. He can be reached at rmarr@metroweekly.com.
← Previous Story The Crew (Review)
Next Story → Life is Strange (Review)