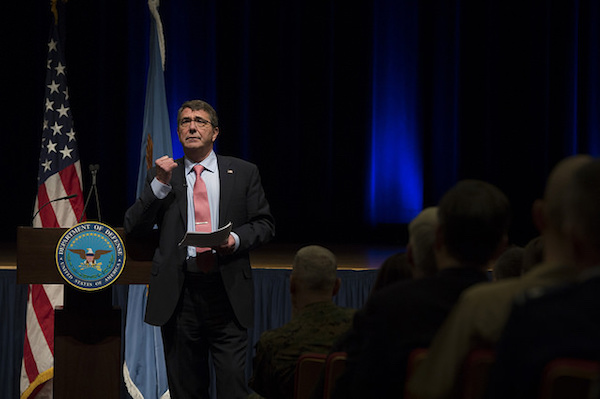 The White House signaled their support for lifting the military’s longstanding ban on open transgender service in the Obama administration’s most declarative statement on the issue to date.

White House press secretary Josh Earnest told reporters Monday that President Barack Obama agrees with sentiments expressed yesterday by Secretary of Defense Ashton Carter that all qualified Americans who are transgender should be allowed to serve in the military.

During remarks to troops in Kandahar, Afghanistan, Carter was asked his thoughts about transgender Americans serving in an “austere environment” like Kandahar and said he approaches the issue of transgender service from a fundamental starting point.

“It’s not something I’ve studied a lot since I became secretary of defense. But I come at this kind of question from a fundamental starting point, which is that we want to make our conditions and experience of service as attractive as possible to our best people in our country,” Carter said. “And I’m very open-minded about — otherwise about what their personal lives and proclivities are, provided they can do what we need them to do for us. That’s the important criteria. Are they going to be excellent service members? And I don’t think anything but their suitability for service should preclude them.”

Earnest said Monday that Obama holds the same views as Carter. “The president agrees with the sentiment that all Americans who are qualified to serve should be able to serve,” Earnest said. “And for that reason, we here at the White House welcome the comments from the secretary of defense. But in terms of additional steps the Department of Defense will take to address this matter, I’d refer you to the secretary’s office.”

Asked what those next steps may be, Pentagon spokesperson Lt. Cmdr. Nate Christensen told Metro Weekly no specific review of the military’s transgender ban is on-going. “We’ll let the Secretary’s comments stand for themselves,” Christensen added.

Last May, after former Defense Secretary Chuck Hagel expressed his openness to a review of the military’s transgender ban, then-White House press secretary Jay Carney said those at the White House “certainly support his efforts in this area.” However, the affirmation from Earnest that Obama holds the same view as Carter that nothing but “their suitability for service should preclude” transgender Americans from serving openly breaths new life into the effort to lift the medical regulatory ban that prohibits transgender service.

“To those familiar with how the military chain of command works, the Commander-in-Chief’s intent could not be clearer: President Obama has done more to ensure transgender Americans are treated fairly and with respect than all those who’ve previously held the office combined,” said Allyson Robinson, a former Army captain and director of policy for SPARTA, in a statement. “Good subordinate leaders take their commander’s intent and execute – they get the job done. That’s what SPARTA’s transgender members, their commanders, and their families are looking to Secretary Carter to do now.”