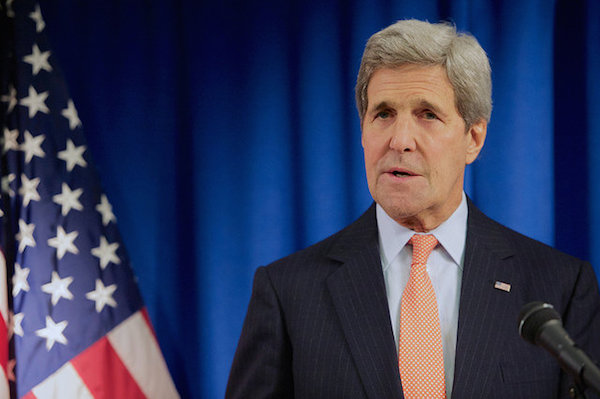 Secretary of State John Kerry announced Monday that Randy Berry will become the nation’s first diplomat tasked with advocating for the rights of LGBT people around the globe.

Kerry said in a statement that he is confident in his new role Berry will “significantly advance efforts underway to move towards a world free from violence and discrimination against LGBT persons.”

The announcement comes after the State Department confirmed earlier this month that a special envoy on LGBT rights would be named before the end of February and be a current out foreign service officer. Berry, a State Department veteran, has served in such countries as  Nepal, New Zealand, Uganda, Bangladesh, Egypt and South Africa.

Last October, 25 senators sent a letter to President Obama urging him to make the appointment “as soon as possible to ensure that it is carried over into the next administration.” In January, legislation known as the International Human Rights Defense Act that would create such a role was reintroduced in Congress by Sen. Ed Markey (D-Mass.) and Rep. Alan Lowenthal (D-Calif.).

Chad Griffin, president of the Human Rights Campaign, said the appointment “shows a historic commitment to the principle that LGBT rights are human rights.”

While more than 75 countries still criminalize consensual same-sex relations, Kerry said this is not the time to become discouraged, but to stay active.

“It’s time to assert the equality and dignity of all persons, no matter their sexual orientation or gender identity,” Kerry said. “And with Randy helping to lead our efforts, I am confident that’s exactly what we can and will do.”

I could not be more proud to announce Randy Berry as the first-ever Special Envoy for the Human Rights of LGBT Persons.

We looked far and wide to find the right American official for this important assignment. Randy’s a leader. He’s a motivator. But most importantly for this effort, he’s got vision. Wherever he’s served – from Nepal to New Zealand, from Uganda to Bangladesh, from Egypt to South Africa, and most recently as Consul General in Amsterdam – Randy has excelled. He’s a voice of clarity and conviction on human rights. And I’m confident that Randy’s leadership as our new Special Envoy will significantly advance efforts underway to move towards a world free from violence and discrimination against LGBT persons.

Too often, in too many countries, LGBT persons are threatened, jailed, and prosecuted because of who they are or who they love. Too many governments have proposed or enacted laws that aim to curb freedom of expression, association, religion, and peaceful protest. More than 75 countries still criminalize consensual same-sex activity.

At the same time, and often with our help, governments and other institutions, including those representing all religions, are taking steps to reaffirm the universal human rights of all persons, regardless of sexual orientation or gender identity. So while this fight is not yet won, this is no time to get discouraged. It’s time to stay active. It’s time to assert the equality and dignity of all persons, no matter their sexual orientation or gender identity. And with Randy helping to lead our efforts, I am confident that’s exactly what we can and will do.