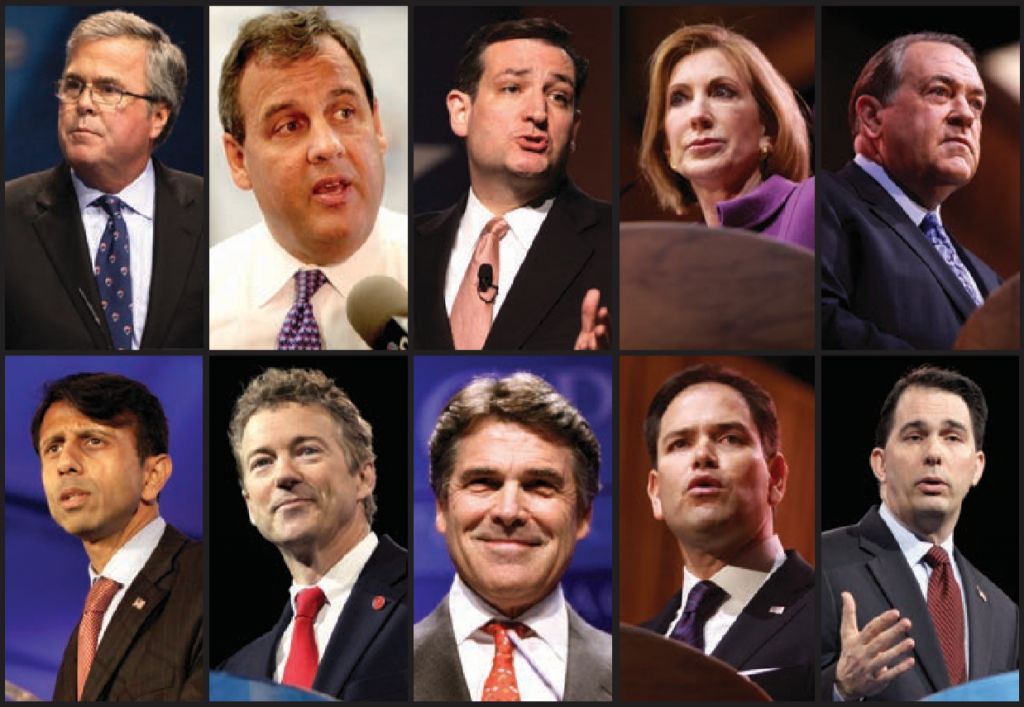 The Granite State, and its 1.3 million inhabitants, enjoy something of an overinflated sense of self worth every four years. Each Presidential election cycle, parties both left and right descend on New Hampshire to pander to its residents, eager to sell their policies, personalities and political ambitions to voters. New Hampshire’s status as the first stop on each party’s primary election tour of America is so coveted, ensuring it remains so is enshrined in state law. That it also brings with it hefty doses of political backhanding, bickering and, in the case of the a recent Republican gathering in the state, all-out war against opponents is merely icing on the granite cake.

Over the weekend, at the elegantly titled First-in-the-Nation Republican Leadership Summit — a fundraiser organized by the state’s Republican denomination — nineteen potential candidates for the GOP presidential ticket took to the stage. Political heavyweights stood alongside fresh-faced newcomers, all eager to appeal to conservative voters, the middle class, and those tasked with sealing their fates: the New Hampshire electorate. What did it entail? Good, ol’ fashioned Clinton and Obama bashing, of course. Taking jabs at the current president and the presumptive nominee for the Democrats, Republican hopefuls tackled the economy, foreign policy and social issues.

Perhaps expectedly, LGBT issues weren’t on the cards, though the issue wasn’t too far from the minds of candidates. Hillary Clinton recently confirmed that she fully supports same-sex marriage from a constitutional standpoint, so it now falls to the GOP to convince LGBT voters that they can in any way appeal to them (Log Cabin Republicans notwithstanding). Unfortunately, for the majority who took to the stage, appeasing gays couldn’t be any further from their to-do lists. With that in mind, we’ve broken down ten of the most prominent (read: electable) GOP contenders and their personal views on LGBT matters. 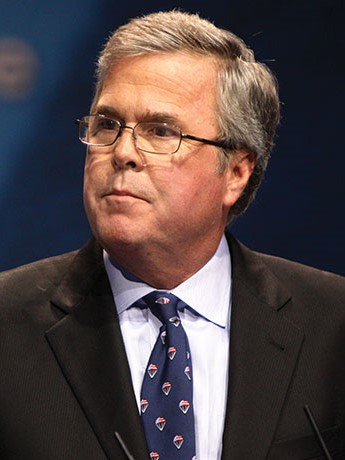 Jeb Bush — The third Bush hoping to take the White House, Jeb hasn’t announced he’s running, but, like Clinton, it’s pretty much assumed. Bush has a rocky history with LGBT rights. Writing in the Miami Herald in 2004, he argued that gay people, or “sodomy,” shouldn’t “be elevated to the same constitutional status as race and religion.” Still, he’s softened of late. He now supports anti-discrimination measures for sexual orientation, and when Florida’s ban on same-sex marriage was ruled unconstitutional by a federal court, he took a balanced view on the matter. “We live in a democracy, and regardless of our disagreements, we have to respect the rule of law,” he said. “I hope that we can show respect for the good people on all sides of the gay and lesbian marriage issue.” Another clue that Bush may be evolving on LGBT issues? His campaign staff apparently includes several pro-gay rights Republicans, according to Buzzfeed. 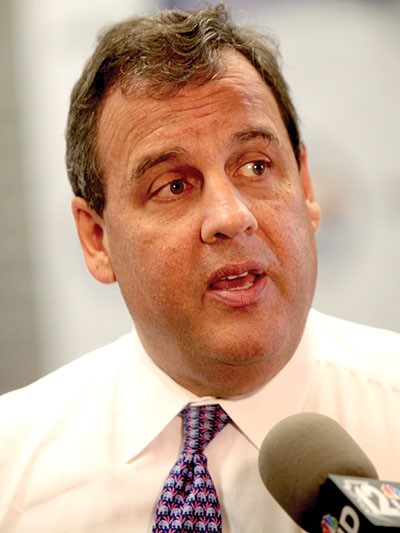 Chris Christie — New Jersey’s Governor, who’s battled Bridgegate, Hurricane Sandy and numerous barbed comments about his weight, has a mixed history on supporting the gay community. As governor, in 2013 he approved New Jersey’s ban on gay “conversion” therapy for minors, and told CNN in 2011 that he believes homosexuality is innate. “If someone is born that way, it’s very difficult to say then that that’s a sin,” he said. Still, when it comes to marriage, Christie is happy to toe the religious and party line. After his state was forced to recognize same-sex marriages by a federal court in 2013, Christie accepted the ruling, but when the Supreme Court declined to hear arguments on same-sex marriage laws last year — clearing the way for dozens of state’s to legalize it — he objected. “I do not believe that this is something that should be imposed from the United States Supreme Court down to the states,” he said, instead preferring that it be left to the states to decide. 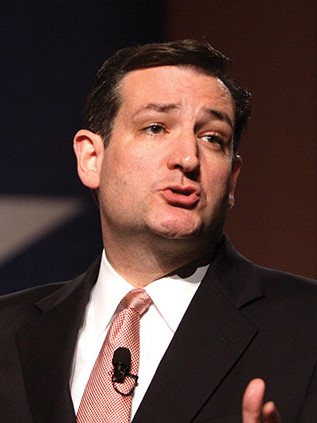 Ted Cruz — The Tea Party darling and Texas Senator loathes gay people and their insatiable quest for equal recognition under the law. He believes being gay is a choice, that marriage should be restricted to heterosexual couples, called the Supreme Court’s decision to allow federal decisions supporting same-sex marriage to stand “tragic and indefensible,” and described the desire for marriage equality as “heartbreaking” while trying to gain support for his State Marriage Defense Act, which would prohibit federal agencies from recognizing same-sex marriages in states where they aren’t yet legal. Cruz in the White House would be catastrophic for gay rights. 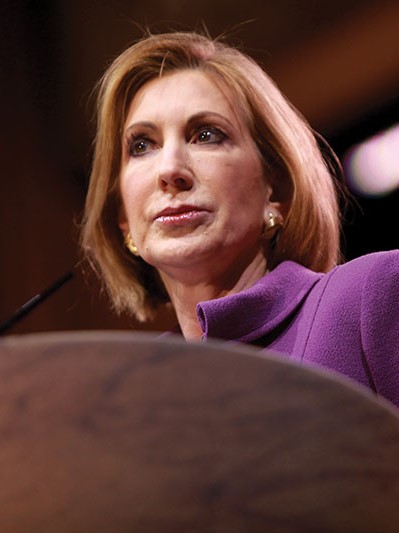 Carly Fiorina — If you haven’t heard of the former HP CEO, you’re not alone. In a recent CNN poll, just two percent supported her should she decide to run for the country’s highest office. Fiorina has zero experience in public office, and her tenure at HP saw her called one of America’s worst CEOs by CBS, CNBC and USA Today — not the best background for running a country. What about the gay community? “I do believe that marriage is between a man and a woman, but also have been consistent and clear that I support civil unions for gay and lesbian couples,” she said in 2010, according to Huffington Post. She also supported the repeal of Don’t Ask, Don’t Tell. However, she voted for Proposition 8, opposes ENDA, and told The Christian Post in February that she believes a Supreme Court decision on same-sex marriage is “the worst thing [they] can do right now.” 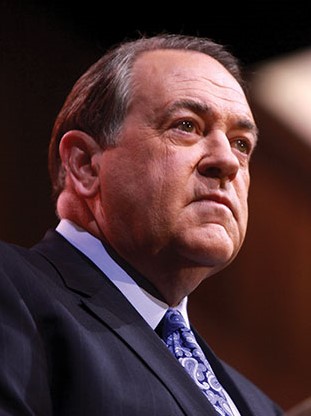 Mike Huckabee — “I feel homosexuality is an aberrant, unnatural, and sinful lifestyle.” Those remarks, from an AP questionnaire in 1992, say all there is to know about the man who signed Arkansas’ same-sex marriage ban into law while governor, opposes gay adoption, compared gay people to drug users and those who practice incest in an interview with a New Jersey student publication, and told CNN this year that he tolerates same-sex people in the same way he does those who drink and curse. He’s so incensed at the thought of a more tolerant GOP, that in January he threatened to leave the party if it softened its stance on same-sex marriage. 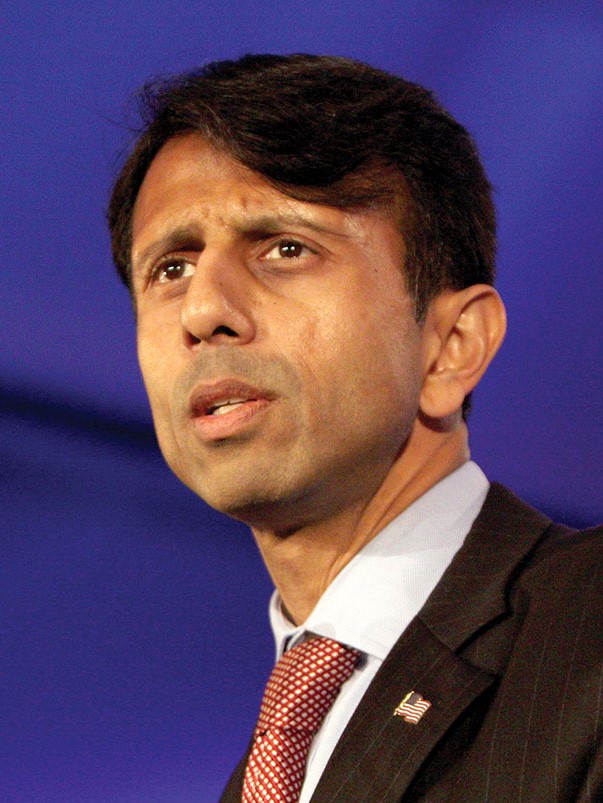 Bobby Jindal — In Louisiana, where the majority still oppose same-sex marriage, the governor’s views on the matter should surprise no one. “I do believe marriage is between a man and a woman,” Jindal told the Washington Examiner last year. “I’m not a weather vane on this issue and I’m not going to change my position.” That’ll be that, then. What’s more, Jindal is using his last term in office to push for Louisiana’s own “religious freedom” bill, with the Marriage and Conscience Act removing punishments for individuals who discriminate against others because of their religious beliefs. However, speaking with MSNBC he claimed that it “is not about discriminating against anyone or about judging people.” 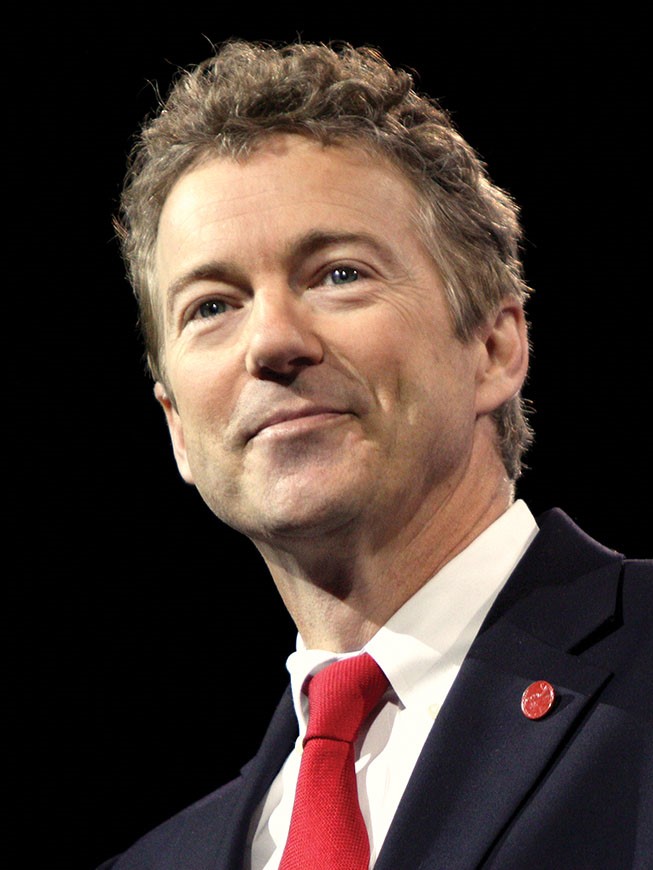 Rand Paul — “I don’t think I’ve ever used the word gay rights, because I don’t really believe in rights based on your behavior,” said the Libertarian conservative and Tea Party supporter Rand Paul, Senator from Kentucky, in a video interview unearthed by Buzzfeed. Curiously, however, Paul opposed a nationwide ban on same-sex marriage, telling Bloomberg in 2013 that he believes it should be left to the states to decide. This year, he told CNN that he supported contracts between same-sex people, separate from marriage, which would allow equal treatment under the law. “I believe in the traditional religious connotation to this,” he said. “But I also believe people ought to be treated fairly under the law.” 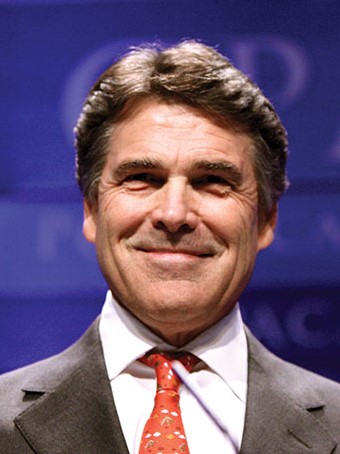 Rick Perry — Let’s ignore Perry’s obviously anti-gay politics, including defending Texas’ anti-sodomy law before it was struck down, supporting the Scouts’ ban on gay members, and generally opposing same-sex marriage, and instead focus on a somewhat prescient statement he made in his 2010 book Fed Up! “Gay marriage will soon be the policy of the United States…. Not because it actually is protected in the Constitution, but because judges will declare it so,” he wrote. In February, this year, a federal judge struck down his state’s ban on same-sex marriage — it now awaits an appeal by Perry and his attorney general to the 5th Circuit Court of Appeals. 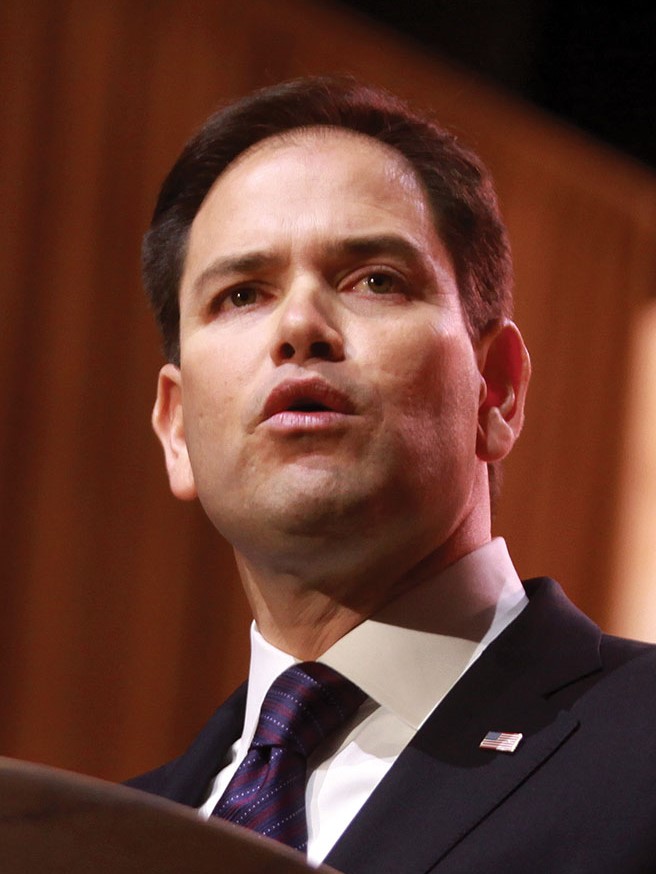 Marco Rubio — Florida’s freshman Senator is an oddity, initially. Spouting Obama-aping rhetoric as he makes his case for President, the staunchly conservative Rubio doesn’t think same-sex marriage is a constitutional right and believes states should regulate it. However, he told CBS that he isn’t “against gay marriage,” but believes it should be between a man and a woman. He told Fusion this month that he would attend the same-sex marriage of a relative or staffer, saying “I’m not going to hurt them simply because I disagree with a choice they’ve made,” clarifying to CBS that he believes “sexual preference is something that people are born with.” However, Rubio isn’t going to wave a pride flag anytime soon. He opposed ENDA, supported DOMA, told Fox News he approves of “religious freedom” laws, and called children of LGBT parents “a social experiment,” according to HRC. Not such an oddity, after all. 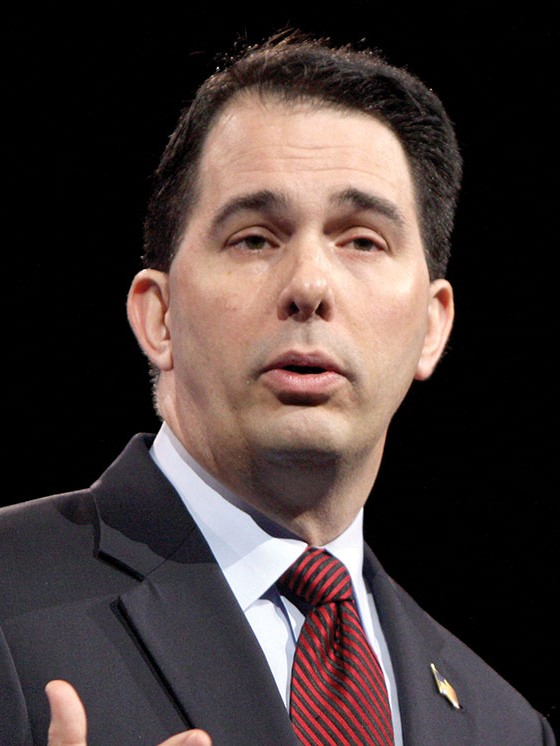 Scott Walker — Not one to be outdone by a young upstart like Rubio, Walker announced to MSNBC last week that he had attended the wedding reception of a gay family member. Note, however, that he didn’t attend the wedding itself, and stated “my position on marriage is still that it’s defined between a man and a woman.” Wisconsin’s Governor also sought to defend his state’s ban on same-sex marriage as federal courts tore it down and supported Indiana’s “religious freedom” law, even though his own state has fairly robust anti-gay discrimination laws. Indeed, in an interview with conservative radio show “Insight 2015,” Walker saw gay people — who faced being refused service in Indiana because of their sexuality — as “chronically looking for ways to be upset about things.” Inequality tends to make people upset, Governor.

Rhuaridh Marr is Metro Weekly's online editor. He can be reached at rmarr@metroweekly.com.
← Previous Story Guam’s Attorney General opens door for same-sex marriage
Next Story → Gallery: Outside the Supreme Court on Tuesday, April 28