Dame Edna: The Fondest of Farewells 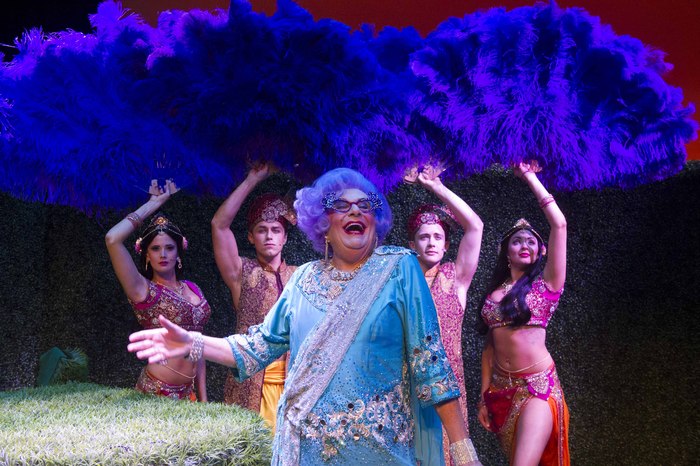 “I’ve become quite a student of audiences,” says Barry Humphries. “They think they’ve come to see me, but I actually have come to see them.”

To be clear, it’s actually Dame Edna, she of lilac-colored hair and cat-eyed glasses, who has come to prod, provoke and preen for audiences, and she’s doing it one last time with a farewell tour that opens tonight and runs through Sunday, April 26 at the National Theatre.

The 81-year-old Australian satirist has been performing Edna for 60 years, and the show is a largely-improvised affair, with the gleefully garrulous Edna reminiscing about her fabulous life, refuting scandals that have plagued her, and playfully interrogating nearby audience members.

“I always found that the best way of remembering one’s lines is to make them up on the spot,” says Humphries, “which is the reason I do this kind of act. As a student actor, I found memorizing lines extremely difficult, so I would drift into a kind of monologue where I could actually improvise.”

Humphries has other characters — notably a vulgar, grossly overweight, foul-toothed Australian ambassador named Les Patterson, who has “a rather large member which can be seen struggling against the fabric of his trousers.” But American audiences took to the sweet yet gently caustic Edna, so she’s the one who has most often made the trip to our shores.

While Humphries has found fortune and fame performing in the guise of a woman, he does not consider what he does drag.

“The point about a drag performer — and there are some very fine artists in that field — is the tension,” he says. “You know it’s a man, and that’s what makes it clever, really. You know it isn’t Marlene Dietrich or it isn’t Liza Minnelli or Madonna, who by the way, I’m allergic to, but don’t tell anyone. But that’s the point of drag — the tension between the male and the impersonation. Edna is just a character I play. I play her as I would play Uncle Vanya.”

As for those audience members who automatically assume that the straight Humphries is gay, he chuckles. “I have never gone to the theater and wondered about the sexuality of the actors. It seems to be that it’s sort of absurd speculation. When I go to see a production of Hamlet, I don’t wonder whether the actor is Danish or not.”

From the Archives: Read our 2003 interview with Dame Edna