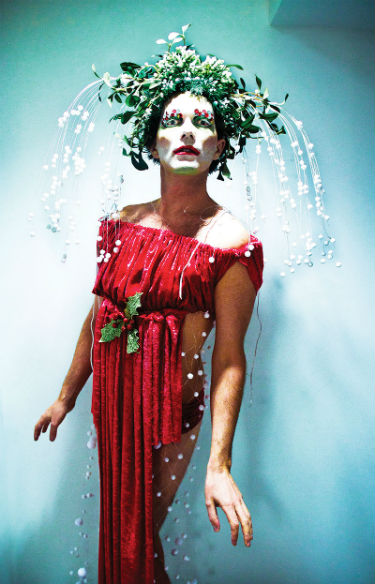 Taylor Mac’s The 20th Century Concert: Abridged is not cabaret. It’s not, strictly speaking, even a revue of the past century’s most popular songs.

The New York-based artist, who performs in gender-ambiguous conceptual drag, calls it a “performance art concert [presenting] my subjective history of popular music…. Sometimes they’re songs that nobody’s heard of, or that weren’t that popular from their decade but were popular in a small community.”

Community is what it’s all about. “I wanted to make a show that was about how community is built through deterioration and imperfection.” Mac’s inspiration, albeit indirectly, was the impact of the AIDS epidemic on the gay community. The California native was barely a teenager when he went to an AIDS walk in San Francisco in 1986. “It was the first time I’d ever experienced queer agency or the queer community, and it was the first time I’d ever seen an out homosexual before — thousands of them.” It was a profound experience for Mac, who now identifies as “gender queer” and lives with his longtime same-sex partner, yet it was also a deeply poignant one. “I was exposed to that community because it was deteriorating — individuals dying from a disease en masse…. So I decided to make a show that was a metaphorical representation of that.”

Mac picked Laura Branigan’s “Gloria” to represent the 1980s, a rather chipper song for a not-so-chipper decade. And it’s that kind of contrast that Mac is going for. “We bring in this very cheese-ball song and we make it a little more complex” — by talking about serious issues from the era.

In 2016, Mac is planning a marathon all-day concert in New York, accompanied by two-dozen musicians and other guest artists, for a fuller review of American history as seen through a pop music revue starting in the 1770s. “The whole idea is I’m supposed to be falling apart while I perform a 24-hour concert with an audience,” he says. “What happens as a result of going through an experience like this together?”

Taylor Mac performs Saturday, April 11, and Sunday, April 12, at 8 p.m., at The Clarice’s Kogod Theatre at the University of Maryland in College Park. Tickets are $25. Call 301-405-ARTS or visit theclarice.umd.edu.