Tomorrowland is mess of a story that contradicts itself tonally, politically, and philosophically 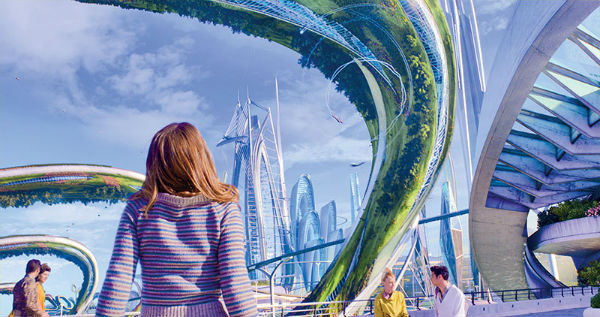 What is Tomorrowland? No, really. What is it? After two hours of eye-numbing visual effects, outlandish sci-fi set pieces that defied even simple logic, and enough bland platitudes to fill a corporate boardroom, I’d really like to know.

Brad Bird, a wonderful filmmaker who has directed many great movies and surely will do so again, seems to believe that the world, as it exists today, is mired in pessimism. If only people could hope again — if only they could dream again — then humankind would be spurred toward unknown heights of technological and societal progress. That’s the premise of Tomorrowland (

), as much as I recognized a coherent one within it. The path to the future isn’t political, or difficult. It’s paved with cool inventions.

Frank Walker (George Clooney) used to believe in that future. As a child, he was whisked away to Tomorrowland, a pseudo-objectivist utopia that exists in an alternate dimension. Frank grew up there — without ever wondering what happened to his family, apparently — and became a famed inventor, able to build for the sake of fun, always chasing inspiration. Then, of course, something went wrong: he invented a tool too dangerous for Tomorrowland, and was banished forever by the city’s governor (Hugh Laurie). When a young woman named Casey Newton (Britt Robertson) and a robot girl named Athena (Raffey Cassidy) track him down, he’s effectively living as a hermit, cynicism and gadgets as his only companions.

You could guess much of the rest, which is a thankful addition to such a bewildering movie. Casey convinces Frank to team up with her and Athena, who must return to Tomorrowland to prevent a cataclysmic disaster that threatens Earth. This mission takes them around America, across the Atlantic to Paris, into outer space, and back to terra firma. Not to spoil the ending, but they save the world, somehow, with hope. A big explosion helps, too. But it’s mostly hope.

It might be a little unfair to criticize Tomorrowland for sticking to themes that, admittedly, are fine and comforting presences in a childrens’ movie. However, Bird’s commitment to abstract banalities and spineless pep talks accomplish neither. Kids should be encouraged to hope and dream and invent fun things. Hell, everybody should. That’s still no excuse for a mess of a story that contradicts itself tonally, politically, and philosophically. Tomorrowland isn’t going to inspire the world’s next generation of scientists. It takes a lot more than a movie to do that.