Review: A Tale of Two Cities at Synetic

When a drag queen and a baby are thrown together, comedy doesn't just happen, it combusts 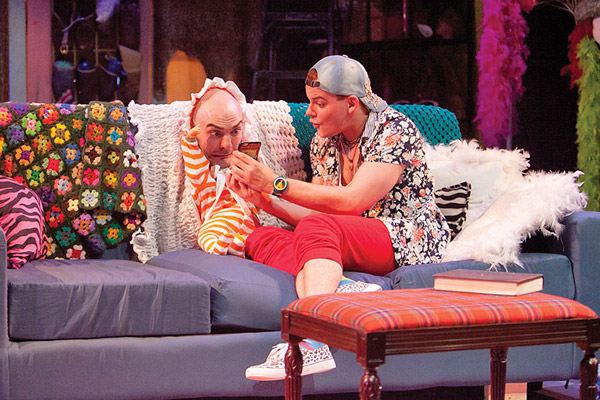 Should you adapt an adaptation? What if it upstages the original?

In the case of Synetic’s A Tale of Two Cities (

), it’s a question worth asking.

But a little context first. The Synetic production in issue is a take on Everett Quinton’s 1988 adaptation of the 1935 film version of the Dickens classic. If this cavalcade isn’t enough, consider also that Quinton’s piece is quite the adaptation: Jerry, a drag queen in her civvies, discovers an abandoned baby at her door and in order to stop the howling, ends up acting out all the parts of the Dickens tale as she gradually prepares for her evening performance.

It is an interpretation very much in keeping with Quinton’s (and his late partner Charles Ludlam’s) genre known as the Theater of the Ridiculous, an outré form of theater-performance from the mid-sixties that mixed campy silliness with the avant-garde.

“Vato Tsikurishvili’s sense of what is funny about babies and what would be incongruous in a baby is pure magic. It just doesn’t get any better.”

The genre was, without doubt, meant to provoke, but it was primarily meant to entertain — and this Tales is no exception. Jerry’s apartment is a prop-filled Aladdin’s cave and he, a professional entertainer, is clearly fond of ridiculous antics whether on stage or off. It is a recipe for fun. But as he bobs and weaves his way through his filmic impersonations, replete with transatlantic accents, it is a set-up that is also a vehicle. As Jerry explores Hollywood’s version of the personal dramas and sacrifices of the French Revolution, Quinton hints at a host of issues both gay and universal: what does it cost to deny oneself — and what to be true?

With this context in mind, now consider Synetic’s interpretation. With their comic flair and comfort with the avant-garde, the piece would seem an interesting match. And it is, except for the fact that Synetic makes its own rather fabulous adaptation: they bring the baby to life. Played by Vato Tsikurishvili (or really just his head), the “problem” here is that he is just so damn funny he not only threatens to steal what is ostensibly a one-man show, he changes the entire conceptual emphasis.

And here’s why: Jerry and the baby make for great comedy –- probably some of the best of this theatrical season — but their dynamic is Synetic through and through. As hilarious as it is, it feels like a graft onto Quintin’s much more abstract humor, with its original goal of showcasing the impersonator-talents, and subtext of angsts, of whomever it is playing Jerry.

The result is that, as marvelous as the baby and Jerry are as a comic duo, the choice ends up serving neither the comedy nor Quintin’s themes fully. As a straight comedy — with far less of the reenactments –- this would have been a late-night crowd-pleaser of the best kind: edgy, irreverent and crazy-fun.

But as it stands, one minute we have Jerry very much engaged with the outrageous baby and the next he is ignoring it in order to meet Quintin’s need to immerse Jerry in the Tales’ impersonations and its dramatic dynamic. This shift would, without doubt, be far less glaring were the baby left a non-entity. And one feels director Paata Tsikurishvili is aware of the dilemma based on how often he removes the baby from sight so that our attention is steered firmly and resolutely to Jerry.

When the baby is active, it puts Jerry firmly into the role of foil. This lingers over his character even when he is holding forth as the dramatic center. It’s a challenge and, as Jerry, Alex Mills does a spectacular job of embodying this driven, exuberant, slightly desperate man. It certainly helps that Mills is a gorgeous presence, a bundle of energy and engagement and a natural comic. Indeed, he looks to have a quite an untapped and startling potential: remove all affectation, grind him down to a dark place, immerse him in the language, and he might be a stunning Hamlet.

As for Vato Tsikurishvili, as a tremendous physical comic and mime, he is utterly and completely in his element. But it is more than this: his sense of what is funny about babies and what would be incongruous in a baby is pure magic. It just doesn’t get any better and it leaves one wishing that Synetic had just stolen Quintin’s idea and made it 100 percent their own.

And that raises an overall issue with Quintin’s piece: it quite simply needs an editor. There might be an actor (Floyd King has taken this role to acclaim) who can carry Jerry’s many long-winded interludes as he labors through Dickens’ convoluted characters and plot, but it’s hard to imagine. Despite the joyous enthusiasm of Mills, they just don’t add much beyond a point. And the unfortunate knock-on effect is a dulling of the senses, even when Jerry starts to play with the apartment’s many props (in an inspired set by Luciana Stecconi).

And this need for a firmer hand extends to the finale, which arrives awkwardly on the heels of a more poignant moment. The play may have been written as such, but it is another moment when one wishes Synetic –- master storytellers that they are -– had cut to a more succinct chase.

Thus, this Tale has been multiplied, bifurcated and generally messed with. Go for the baby and for Jerry’s joie de vivre and it’ll be, if not the best of times –- a pretty good one.

← Previous Story Reviews: Jumpers for Goalposts, The Letters
Next Story → Review: Rosencrantz and Guildenstern Are Dead