Charmed: An interview with Liam Forde 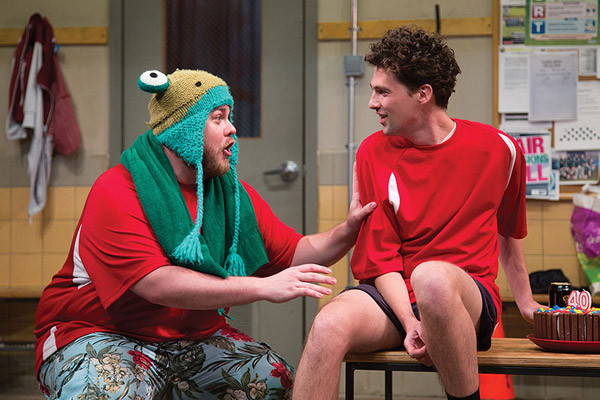 “I can talk to old people all night!” Liam Forde laughs. “Older people like me because I like the music that they’re interested in.” The 25-year-old traces that love back to Ella Fitzgerald.

“My sister brought home an Ella Fitzgerald Sings the Best of the Songbooks CD,” he says. “I heard it through the wall, and it just changed things. I was like, ‘What the hell is that?'” From then on, he couldn’t stop listening to the pop standards that make up the Great American Songbook. “For me that’s the best popular music ever written. By far.”

In recent years, the New York-based actor has sung in more and more cabaret shows, including one a few summers ago at Arlington’s Signature Theatre. But right now he’s on stage at Studio Theatre, in Jumpers for Goalposts, a play about the struggles of a gay amateur soccer team on and off the field. Forde almost turned down the audition for the show because he had another gig booked. But then he read the script and realized he had to be part of it. “It really is a gift,” Forde says. “There’s something about this play that’s really, really special.”

Forde portrays Luke, a “nervous gay” character modeled after the play’s British author Tom Wells, who Forde calls “funny and intelligent and sweet.” The character is shy, inexperienced and socially awkward, and gives up at the slightest hint of conflict — both in matches as well as in his budding romance with fellow teammate Danny. “The beautiful thing about the play [is] that everyone can find themselves in these characters,” Forde says. “Everyone has a beautiful arc — in this little dingy locker room. I’m just so charmed by it.”

So charmed that, although he’s got some cabaret gigs in New York already lined up for next month, Forde is not eager to say goodbye to the show: “I can’t wait to turn around and do it again as soon as it’s over.”