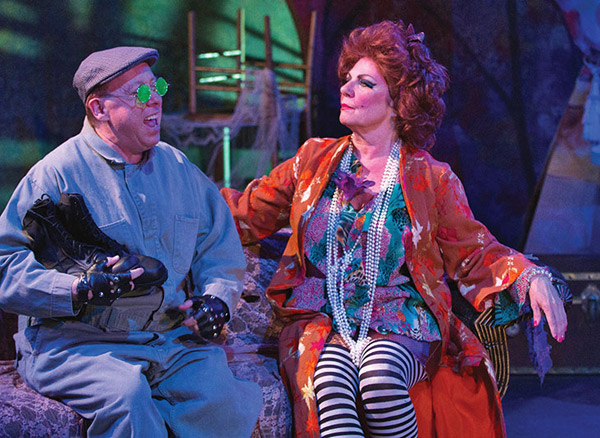 Avant Bard has been through changes. In 2013, founding member and artistic director Christopher Henley handed the directorship to Tom Prewitt. Prior to that, the company moved from the wonderfully gloomy Clark Street warehouse to the rather sterile surrounds of the Artisphere Black Box and now find themselves in the Gunston Arts Center, annex to the middle school. Such is the nomadic existence of an alternative theater company in the non-alternative surrounds of Washington, D.C.

Yet despite the struggles for a stage and the energy and grit it must take to keep it all going, Avant Bard has still found time to evolve its vision. Their innovative Inception Circle process, for example, invites audience members and sponsors to participate in the conceptualizing of coming productions with a view to informing them with local issues and perceptions. It offers the promising potential of spreading the company’s roots into the community and, if you can tolerate the metaphor, drawing nutrients from the deeper cultural and philosophical pockets that manage to survive in this largely conventional locale. It’s also just a damn good way of raising their profile.

Either way, Avant Bard deserves the attention. Like many contemporary fine artists, they have the chops for the classical but are driven to re-interpret them through their own unique media and forms of expression. In doing so, they challenge genres and push boundaries, broaden perceptions and ideas. Whether offended, enraptured, puzzled or simply entertained, an AB production is a place to be given pause — from all that is expected and predictable — for thought.

“Despite the energy and grit it must take to keep it all going, Avant Bard has still found time to evolve its vision.”

Having said all that, it is important to go with expectations carefully in check. There will be folding chairs, the municipal vibe of a middle school (at least until you get to the little theater foyer), and the mix of experience and cobbled-together sets that comes with a small, underfunded company that takes chances on emerging actors.

And, of course, as with any questing, adventurous theater company, one must take the long view. Not every production will ring the bell.

Thus comes the company’s rendering of The Madwoman of Chaillot (

), Jean Giraudoux’s tale of the Parisian eccentric who, along with her ragtag friends, takes on the robber barons intent on tapping reserves of oil under the streets of Paris.

Out of the box, this isn’t the easiest of plays to stage, with a long first act in which the scheming businessmen sit in a café and do little more than make their case for their wicked ways and their secret plans for Paris. It is a long haul, with Giraudoux (as translated by Laurence Senelick) making points on the evils of business and the corruption of the souls that thrive on it. Despite quirky interruptions, the charisma of Jay Hardee’s Chairman of the Board, and the appeal of Joe Palka’s Stockbroker, the pace may be there but not quite the rhythm. One can see exactly why director Christopher Henley keeps the speed on — it’s a race against boredom — but it doesn’t leave much room for nuance.

By the time the Madwoman arrives in her parakeet yellow kaftan and pearls, the eye and ear are ready for the change. But in the title role, Cam Magee delivers far more than that. Indeed, she is the really the reason to see this production, embodying her Aurelie with an engaging balance of joy, subtly subversive energy and the rueful realities of aging. She transcends the sweetly simple and evocative set and connects strongly to the whimsical, sometimes darker, themes of Frank DiSalvo Jr.’s excellent sound design and the philosophical mood of Giraudoux’s voice. But in carrying this production, she is also facilitator and she connects and draws from the younger performers in ways that bring them up and outward.

“Cam Magee is the reason to see this production, embodying her Aurelie with an engaging balance of subtly subversive energy and the rueful realities of aging.”

The other standout here is James Finley who has been admirable for his versatility in service of this troupe (especially in its prior incarnation as the Washington Shakespeare Company), but who now emerges as an actor of talent and scope. His Ragpicker is a compelling presence but, more importantly in this wordy play, Finley delivers him with the texture and music the language needs to catch the mind.

Of the ensemble, many of whom take multiple roles, Daven Ralston delivers her Dishwasher, Irma, refreshingly free of much of the coy affectation seen in many young female actors and Kim Curtis offers a touch of Avant Bard’s characteristic humor. Zach Roberts as the despairing Pierre is another actor who understands understatement, while Tony Greenberg as the Waiter and the Sewer-Man offers a gentle and effective comic lilt to his characters. The other players, each in different stages of experience and direction, do no harm even if they don’t necessarily add (and a few teeter on the edge of what may be dubbed amateur-dramatics-syndrome).

Thus, there are some challenges in presenting this somewhat eccentric piece and in keeping cohesion in a cast of not insignificant variables. Does it work as a whole? It is a resounding “yes” for those who wish to see this work dramatized for its own sake. For everyone else? It is also a “yes;” for the sole purpose of seeing and supporting alternative theater alive, in progress, and doing some pretty good kicking.