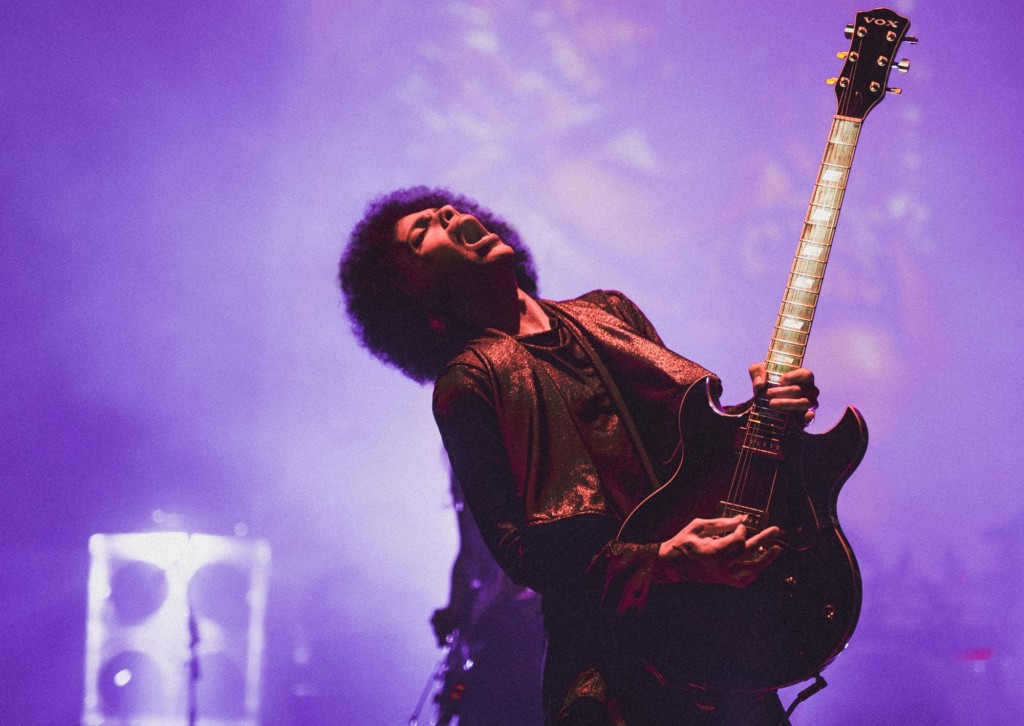 A phenomenal, self-determining talent, Prince has always been in a class of his own. Versatile, clever, and curious, he moves genres like he owns them: rock, soul, pop, psychedelia, hip hop, and always funk. And despite some friction with his record companies and the vagaries of the internet, he has continued to pull and retain a vast and varied audience.
After three decades in the business, he has a lot of people to please. So when it comes to a tour, the question is: which goods will be delivered and to whom?
Suffice to say that for the D.C. crowd at the Warner on Sunday night, it was, for the most part, all about the hits. If your bucket list includes hearing When Doves Cry, Little Red Corvette and other such FM gems played loud and live, then start scouting for an announcement of the next date and city (the Hit N Run tour dates and locations will be set and revealed at Prince’s discretion).
If, on the other hand, you are looking for the funk, don’t get your hopes up. Although there is this and that around the pop – – if feels far more tease than true. There was no full bore Sexy MF or its ilk, despite a horn section that practically begged to be let loose into wilder territory. And, if you are after the soulful, keening multi-registered balladeer, you’ll have be satisfied with a Prince-plus-keyboard medley that moves with the speed and brevity of a Twitter feed.
If it all sounds a bit shallow, well… it is. But let’s be real. Prince has always been about the brand — crafting it with skill, imagination and savvy control. If he is calling it the Hit N Run tour, you can be sure there’s at least a few ways to take it, no doubt some of them tongue-in-cheek. Arguably, he is delivering exactly what the title promises.
But philosophies may differ on where the cleverness ends and something a bit more cynical begins. There were several aspects to the show, at least as seen in D.C., that give one pause. First, although the projected nods to Yellow Submarine art and animation were charming, the switch to a typical psychedelic color spray with Prince’s Afro-haired figure before it was a little too pandering to the current fashion for all things psychedelic-lite. Prince may have earned the right to reference the likes of Hendrix, but query how many in the crowd that roared have ever contemplated the likes of Machine Gun. Indulging audiences in such pretend-play is a depressing reminder of how easily manipulated we’ve all become in this age of the instant everything: gratification, image, history, music. If anyone is in a position to reeducate the masses, it’s someone like Prince. Wish he’d do it.
And what of the pre-show announcement to turn off cell phones and relax because the kids are safe at home? Or the projection of an obviously suburban toddler and the slogan “That’s what I’m talking about!” that drew another approving scream from the crowd? Even Prince’s current base band, 3rdEyeGirl, all leggy and super-modelly, looks like a barbecuing dad’s idea of a girl band.
Overt and covert. It was impossible to ignore this obvious catering to an audience of a certain demographic. For anyone not in that realm it smacked of one of those God-awful scenes at the end of a romantic comedy when the band plays it up for the self-congratulatory couple. Ugh.
But will you be out of your seat dancing? Yes. Will you see a performer and musician who puts most others to shame? Yes. Even in an outfit reminiscent of a designer Hefty bag and delivering a ho-hum repertoire, Prince is unstoppably musical and a riveting presence. He didn’t quite dance, or look as if he was actually enjoying himself, but he owned every inch of it with unmistakable élan.
Which made it even more frustrating to be so tantalizingly close to the “other” Prince. Every veer into the funky — a memorable rendering of the inimitable Kiss, some heart-stopping dips into classics such as Michael Jackson’sDon’t Stop ‘Til You Get Enough and Wild Cherry’s Play That Funky Music — was a glaring reminder of what the set could have — should have — been.
He made some aural space for guitar work, particularly during an interesting interlude in Red Corvette, but it was well in keeping with the theme of the evening: hit and run. There was far too little of his mastery on display for aficionados of either the artist or the instrument. For their part, 3rdEyeGirl were competent but lacked the one millimeter more punch they needed to truly deliver.
The bottom line is that with expectations in check this is a fun and exciting evening in the presence of uninspired greatness. But if you are looking for Prince the funky, Prince the guitarist or Prince the outlandish and experimental, you’ll be better off waiting for the Stay N Play Tour….
[ninja-inline id=73197]