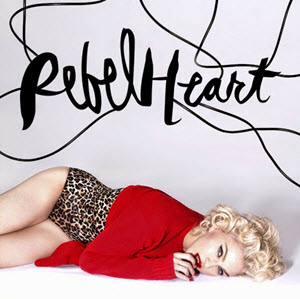 Decades-old albums and hit collections that have been out for years sell enough week in and week out to hang around in Billboard’s Top 200, but Madonna’s big-budget and lavishly promoted new album, Rebel Heart, barely released three months ago, has fallen off a cliff and is nowhere to be found.

After debuting at #2 on March 27, it dropped to #21 in its second week. By the end of May, it was out of the Top 200 completely. Last week, on the strength of its third single “Bitch, I’m Madonna,” it reentered at #198, only to fall right back out. It has spent only 10 weeks on the album chart, just 3 of those in the Top 40 (by contrast, her self-titled debut lodged an astounding 167 weeks).

History is also happening on Billboard’s Hot 100 singles chart, and not in a way Madonna fans would like. Rebel Heart’s first single, “Living for Love,” failed to reach the Hot 100, becoming the first lead single from a new Madonna album to miss the chart since her debut with “Everybody” over 30 years ago. Despite a widely-hailed video, second single “Ghosttown,” easily the best track on the album, was also unable to crack the Hot 100.

That brings us to this week, and the Pop Goddess’ latest offering: “Bitch, I’m Madonna,” released June 15. Madonna trotted out a veritable cavalcade of A-listers to appear in the video, including Kanye West, Beyoncé, Miley Cyrus, Chris Rock and Katy Perry. The ever-popular Nicki Minaj guests on the track. She commissioned numerous remixes. If there was ever a case of an artist putting all her chips on the table, “Bitch, I’m Madonna” is it. And what did she get for the effort? Last week the song debuted at a feeble #84, and on this week’s chart fell back to #95. Rebel Heart may be the first album in Madonna’s career not to have any singles make the Top 40 — a stunning development for pop’s most enduring artist.

Why is this happening? Madonna fans may point to the high-profile leak of demos for many of the album’s tracks (and cuts that didn’t make the album) late last year. Surely that unfortunate occurrence slashed sales figures, right? Perhaps. The most pirated albums in internet history — Drake’s Nothing Was the Same, Beyoncé’s 4, Rihanna’s Unapologetic and Justin Timberlake’s The 20/20 Experience — were all smash hits despite the high volume of illicit downloads. It’s rare for an album not  to leak prior to its release, although it is true Rebel Heart (albeit in unfinished form) leaked earlier than most. Still, what difference did it make? It’s impossible to quantify, but let’s be generous and assume that Rebel Heart would have sold twice as many copies in its first week had the early leak not happened. That still would have resulted in barely over half as many copies first week sales as her last album, MDNA.

So, then, why such an abysmal showing? The fact that Rebel Heart is virtually unlistenable certainly doesn’t help. It’s a miscalculation aimed at a young audience that has grown up on Rihanna, Beyoncé, Bieber, Timberlake and others. These kids really couldn’t care less about Madonna. But it’s more than just the album’s weakness and misguided direction: Madonna has been abandoned by Top 40 radio, which is in the hands of a few big corporations who determine the playlists.

Detractors have been merrily predicting Madonna’s downfall ever since she emerged, and she’s proven them wrong at every turn. Are they celebrating now?

Ageism is also a deciding factor. Madonna is far from the first to go through this career arc, although she’s managed to hold off the inevitable the longest. Pop divas Diana Ross, Donna Summer, and Cher have gone through similar patterns. It’s not just the ladies. Prince hasn’t had a major pop hit since “The Most Beautiful Girl in the World” twenty-two years ago. Elton John, one of the most consistent hitmakers in the ’70s and ’80s, hasn’t had a Top 40 hit in nearly twenty years, despite releasing multiple albums.

There has been a constant undercurrent of distasteful ageism surrounding Madonna for quite a while. When a new Madonna project appears, there are near-daily social media memes lampooning her age, an indignity to which male artists appear to be immune. Detractors have been merrily predicting Madonna’s downfall ever since she emerged, and she’s proven them wrong at every turn. Are they celebrating now? If so, they should temper their glee. She will still certainly rake in millions of dollars worth of ticket sales as she tours in support of Rebel Heart. Still, it’s undeniable that the album’s spectacular failure is a turning point in pop history.

There isn’t an artist alive who has navigated the fickle twists and turns of the unforgiving pop music landscape better than Madonna. Yet one could easily make the argument that even if Madonna had released the best album of her career with Rebel Heart, it wouldn’t have changed the outcome. The album is the latest downward spiral in a decline that started with 2003’s American Life. Its single, “American Life,” soured radio programmers on the artist. It was edgy and dark, had a controversial video, and a widely-reviled rap segment that was probably enough by itself to doom the song. Still, American Life managed to sell over 5 million copies worldwide. Rebel Heart will be lucky to hit 1 million by the end of the summer.

Music writer for Metro Weekly. Contact at cgerard@metroweekly.com.
← Previous Story A Day in the Folklife
Next Story → The 50 Greatest Pop Songs of the ’80s, Nos. 50-41