By John Riley on September 16, 2015 @JohnAndresRiley 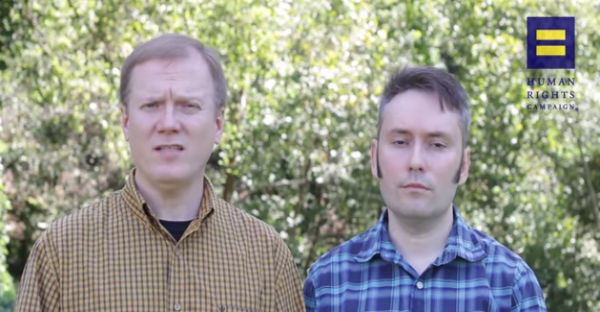 A male same-sex couple from Rowan County, Ky., has posted a video aimed at GOP presidential candidates ahead of Wednesday night’s debate, which will air on CNN.

In the video, posted by the Human Rights Campaign, David Ermold and David Moore, one of the same-sex couples who were previously denied a marriage license by county clerk Kim Davis, ask the candidates whether they will defend the right of same-sex couples to marry, or whether they support allowing government officials to discriminate against people based on their sexual orientation.

“We were denied a marriage license in Rowan County, Kentucky, and were disappointed to see that some of the Republican presidential candidates feel that Kim Davis was correct in discriminating against same-sex couples,” Ermold says in the video.

Moore and Ermold previously clashed multiple times with Davis and her deputies in several videotaped encounters that they then posted to YouTube. They were not among the four defendants who initially sued Davis for the right to obtain a marriage license after she decided to stop issuing all licenses following the Supreme Court’s decision in June that legalized marriage equality nationwide.

Typically, CNN’s presidential debates will feature questions from ordinary citizens who submit YouTube videos who want to ask the various candidates about a specific issue. It is unclear whether the couple or HRC has submitted the video to CNN debate moderators to ask at either the 6 p.m. or 8 p.m. debates being held Wednesday evening. But even if the candidates never see the video, HRC can use it to highlight some of the anti-gay positions being adopted and pushed by presidential candidates, in order to engage and rally supporters of same-sex marriage over the course of the upcoming year and leading into the 2016 election.

“The U.S. Supreme Court has affirmed that David Moore and David Ermold, and every other loving, committed same-sex couple in the nation, have the right to marry legally in every corner of our country,” JoDee Winterhof, HRC’s senior vice president of policy and political affairs, said in a statement. “Voters deserve to know whether those running for president will stand on the right side of history, or with those who violate the Constitutional rights of LGBT citizens.”

HRC has also come out in opposition to the First Amendment Defense Act, a piece of congressional legislation that has been embraced by many Republican presidential candidates. The legislation, as written, would allow even government employees like Kim Davis to refuse service to same-sex couples by citing religious objections. Due to the controversy over Davis’ recent stint in prison stemming from her refusal to issue licenses to same-sex couples, the candidates in the GOP debate are expected to either be asked about, or raise the issue, unprompted, of Davis’ situation and concerns about “religious liberty” for those who hold conservative social views.

John Riley is the local news reporter for Metro Weekly. He can be reached at jriley@metroweekly.com
← Previous Story Judge: Transgender woman can sue for sex discrimination
Next Story → Kim Davis mentioned in first round of second GOP debate