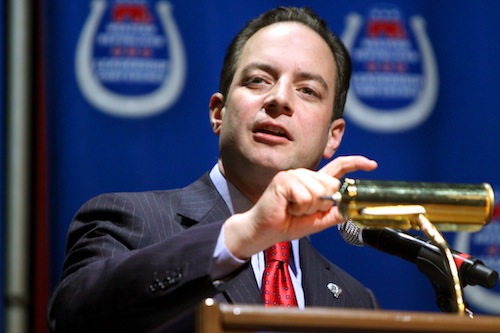 The Republican National Committee drew praise from LGBT groups after it rejected two anti-gay resolutions earlier this month. But while nullifying the Supreme Court’s marriage equality decision and calling for sex education classes to condemn homosexuality are off the table, so-called “religious liberty” legislation is very much in style.

According to The Daily Signal, an online news publication of The Heritage Foundation, the RNC quietly passed a resolution on Aug. 14 calling for Congress to pass the First Amendment Defense Act. Sponsored by U.S. Rep. Raul Labrador (R-Idaho) and Sen. Mike Lee (R-Utah), the legislation would prohibit a federal government entity from taking action against a person who objects to same-sex marriage or homosexuality. Such actions include denying tax credits, contracts, grants, certification, accreditation or employment to a person who opposes homosexuality due to strong religious beliefs or moral convictions.

The First Amendment Defense Act (FADA) would also allow anybody who felt they were retaliated against by government actors to sue for damages. It also outlines how the sponsors expect courts to interpret the act, including a clause that reads, “This Act shall be construed in favor of a broad protection of free exercise of religious beliefs and moral convictions, to the maximum extent permitted by the terms of this Act and the Constitution.”

In its resolution, the RNC says that the act is in response to the Supreme Court’s 5-4 decision legalizing marriage equality nationwide, “without regard to the democratic rights of the people or the states, and without any religious liberty protections.” The resolution also lists the names of several individuals and business owners who have been mired in controversy over their refusal to serve LGBT individuals or provide services that are intended for a same-sex wedding. The resolution reads:

Whereas, Many on the Left exhibit an intensifying hatred and intolerance for gay marriage dissenters; and

Whereas, Religious schools, colleges and universities, and other charities, could lose their First Amendment rights and their right to equal access to government benefits, including 501(c)3 status, student aid, and government contracts; therefore be it

Resolved, The Republican National Committee urges Congress to pass and the President to sign The First Amendment Defense Act to protect the rights of believers to equal treatment by the government of The United States of America.”

Social conservatives argue that Labrador and Lee’s legislation is needed to protect the sincerely held religious beliefs of people who will otherwise be forced to — as they see it — participate in or somehow implicitly endorse same-sex marriage or homosexuality. They reject the claim by opponents of the act that they are seeking to condone discrimination against LGBT individuals and couples.

Ellen Barrosse, the RNC Chair of the Conservative Steering Committee, told The Daily Signal that the resolution is aimed at protecting religious organizations such as Catholic Charities, which has shut down its adoption services in some states because it has chosen to reject government funds in order to continue to refuse to place children with same-sex couples or LGBT individuals. Barrosse notes that, as far as gay couples are concerned, “This is a free market, there are other agencies that will place children with them.”

However, LGBT groups are fired up about the idea that, under FADA, taxpayer dollars would be given to people, businesses and other entities such as adoption agencies or homeless shelters that want to discriminate against or turn away LGBT people. The Human Rights Campaign noted that “if passed, this legislation would create a breakdown of government services and runaway litigation…. It would permit a federal employee, for example, to refuse to process tax returns, visa applications or Social Security checks whenever a same-sex couple’s paperwork appears on his or her desk.”

One such case dealing with a government official’s refusal to carry out her designated duties is currently being litigated in Kentucky, and gay rights advocates argue that passage of FADA will simply lead to more instances where LGBT people are denied services or recognition because of an employee’s personal beliefs.

“The right to believe is fundamental, but the right to use taxpayer dollars to promote discrimination is not,” JoDee Winterhof, senior vice president for policy and political affairs for HRC, said in a statement. “It’s no wonder the RNC attempted to keep quiet its support for a reckless and irresponsible bill that would promote discrimination with taxpayers’ money and reward discriminatory actions by federal employees with taxpayer funding. Those Republican candidates who choose not to speak out against this RNC resolution should not be shocked when LGBT Americans choose to not give them the benefit of the doubt next November.”