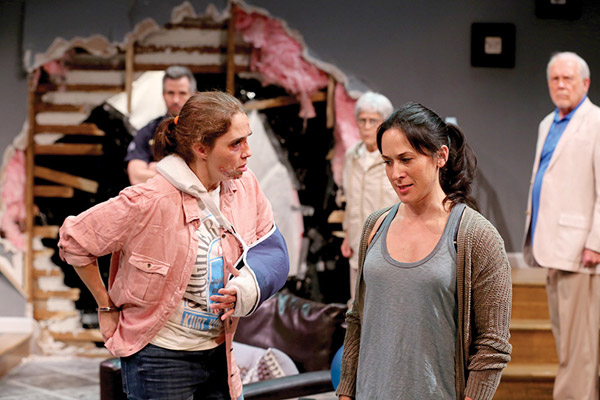 ). A comedy about serious problems, Bad Dog is downright hilarious, especially in the hands of the exemplary cast director Jeremy B. Cohen has assembled for Olney’s world premiere production. Holly Twyford and Alyssa Wilmoth Keegan are perfectly cast as the troubled yet trenchant Molly and her wife, the sweet, sympathetic Abby, a therapist who has only ever known the alcoholic Molly as sober until now. Yet even greater laughs — not to mention dramatic fireworks — are to be found in interchanges between Molly and her uber-Jewish mother, Lois (a captivating Naomi Jacobson) and especially her competitive sister Linda (a feisty Emily Townley).

We also meet Molly’s oldest and more demure sister Becky (Amy McWilliams), her father Walter (Leo Erickson), and the woman for whom Walter left Lois thirty years ago, Sondra (Gladys Rodriguez). It turns out the entire Drexler clan has been summoned to Molly and Abby’s home after a drunken Molly rammed her Prius into her house, effectively realized by set designer Tony Cisek.

The manifest hole in the living room wall isn’t as nearly as large as the internal, emotional holes left over a lifetime by Molly’s supremely dysfunctional family.

It’s not giving too much away to say that the show ends with Molly and family in full-on “bad dog” mode — yet also with a clear sense that things won’t be the same going forward. Molly eventually breaks down and cries over how things have played out — and she also grieves, quite probably for the first time, over the loss of her dog, whose freakish recent death contributed to her relapse. It’s amazing what good grief can do. — Doug Rule

Jennifer Hoppe-House on Bad Dog, Grace and Frankie and her carbonated coming out