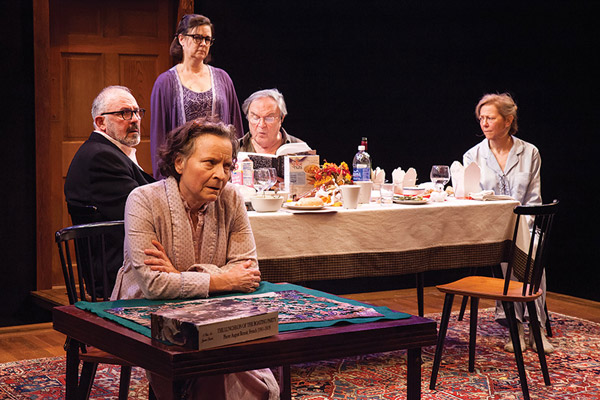 The Apple family isn’t real, and it’s far from ideal — in fact, it’s likely more dysfunctional and damaged than your own family. It’s certainly more so than mine.

And yet, I was more eager to reconnect with the Apples this season than I am my own. That sentiment is testament to Richard Nelson’s achievement in writing with his Apple Family Plays cycle. But it’s also testament to the productions at Studio Theatre, which really shine on account of the ensemble — featuring the same cast as two years ago and the same director, Serge Seiden, who offers sharp focus on the words and action. In 2013, we met the New York Apples on two different, momentous occasions — Election Day 2010 with That Hopey Changey Thing and Sept. 11, 2011, with Sweet and Sad, the first and second plays in Nelson’s four-part cycle.

The final two installments, Sorry and Regular Singing, are also staged by Studio in repertory. They seem slightly more focused on the personal matters and interpersonal relations among this clan of four siblings, their uncle, and one sister’s boyfriend, and set in Reinbeck, N.Y., in the bucolic Hudson Valley. But the discussions mostly revolve around broader issues and changes in American culture and politics, with connections and comparisons drawn — often subtly, occasionally strained — to past eras and different cultures.

As such, you can pretty easily jump in at any point — you won’t lose much if you only see one play or don’t see them in order. In fact, Nelson has intentionally left some familial aspects and details out, which only encourages a theatergoer to speculate and extrapolate — to “make leaps,” as the brother Richard (Rick Foucheux) puts it at one point in Sorry (}}}}). “It must be ‘wired’ into us,” he says, “this need to try and make sense of things.” Here, as in real life, it can be fascinating to try to make sense of things, particularly the complicated, contradictory characters we encounter. Richard, for example, is the most conservative member of the liberal Apple family, and once again he’s the one who may make you groan with a few pointed jabs at Obama — or Gillibrand, or Cuomo. And yet, he’s also the only truly politically engaged Apple, and by Regular Singing (}}}}), he’s actually working for Governor Cuomo in Albany.

Even more fascinating is the family’s back and forth in Sorry. Despite when it takes place — Election Night, 2012 — the wavering is not so much about Obama vs. Romney, but about whether to send the family patriarch Uncle Benjamin to an assisted living facility. Benjamin is a renowned stage and screen actor, but a debilitating heart attack a couple of years ago caused him profound amnesia. Eldest sister Barbara has cared for him at her home ever since, but his condition is worsening and, as we see in Sorry, it is seriously fraying their relationship. But no one is completely sure and steadfast he should go away. Also, no one is completely right or wrong — and your own views on a particular character are likely to vary from moment to moment.

If Benjamin previously earned the most loyalty and sympathy on account of suffering the family’s greatest loss, it is Marian who becomes the cycle’s beating heart by the third installment.

The ensemble has the kind of ease and natural rapport that only seasoned actors can convey. Ted Van Griethuysen won a Helen Hayes Award for his work as the booming-voiced Benjamin two years ago, and he remains as ever the consummate performer, commanding attention with the simplest sigh or movement. But Sarah Marshall is his equal as family matriarch Barbara, the most durable and crisp Apple in the bunch.

In these last two plays, a richer, deeper portrait of Marian has also emerged. If Benjamin previously earned the most loyalty and sympathy on account of suffering the family’s greatest loss, becoming a shadow of his former towering self, it is Marian who becomes the cycle’s beating heart by the third installment. She finally addresses her own great loss in Sorry, her 20-year-old daughter’s suicide. In Regular Singing, much of the focus is on her actions in caring for her (unseen) dying ex-husband, who left her after their only daughter’s death. Elizabeth Pierotti portrays Marian in an intriguing, complicated mix that seems just right given the circumstances — a bit steely yet unsteady, a little clueless but intuitive and open-minded, scarred and scared but not totally broken or afraid of moving on.

Both Sorry and Regular Singing get bogged down in dialogue that occasionally digresses into polemical territory. They’re also strung together with a few too many allegories and metaphorical tales that sometimes detract rather than enhance our understanding of the Apple family. But in the end, you understand the family plenty — they’re an exaggerated facsimile of your real family. Here’s to your own trip home this season ending up being even half this rewarding.

Sorry and Regular Singing run in repertory to Dec. 13 at