Though focused on multi-generational suffering, the gay-centric "Sons of the Prophet" is a delightful dramedy 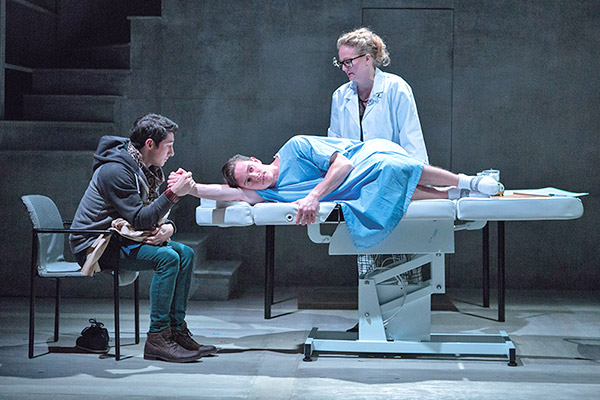 Saint Rafka, revered as a saint of suffering, looms over Luciana Stecconi’s set in Sons of the Prophet (

Yet Stephen Karam’s barbed comedy, now in its regional premiere at Theater J, is mostly joyous. Of particular delight is the way his play — focused on the multi-generational sufferings of a Lebanese-American family — portrays a gay relationship, from tentative first meeting to stripped-down, make-out hookup.

That relationship is between lead character Joseph (Chris Dinolfo) and Timothy (Sam Ludwig), a reporter in hot pursuit of a story about Joseph’s family, the Douaihys. As it transpires, he’s not the only one: Sons of the Prophet centers on Joseph and his boss Gloria (Brigid Cleary), a publishing agent who’s in desperate need of a hit book to turn around her moribund career. Perhaps one about the Douiahys? After all, they’re distant relatives of Lebanese-American poet Kahlil Gibran, author of The Prophet. What a goldmine it could be to get Joseph to write a memoir revealing how his successors are faring, she reasons. Even if Joseph wasn’t an intensely private person to begin with, now would certainly not be a good time to air any dirty laundry, as the Douiahys are still grieving the death of his father.

A promising playwright, Karam packs a lot into this 105-minute, intermission-less play, which was a Pulitzer Prize finalist in 2012 and winner of several awards that year. There’s the controversy over the father’s death, the fault of local star football player Vin (Jaysen Wright) — whose race only strains relations with Uncle Bill (Michael Willis), the aging Douiahy patriarch. The whole town gets caught up when the school threatens to suspend Vin just before a pivotal game and the end of the season. And then there’s the abounding chronic health care problems of Bill, but also Joseph, who is suffering from a mysterious, debilitating condition — and lacking adequate insurance to pay for proper diagnosis, let alone treatment.

After all that, the fact that both Joseph and his younger brother Charles are gay is a refreshingly moot point. “What are the odds?” is a common reaction, even among more conservative family members — though in truth, it’s a refrain that pertains to so much of the action in this play, all about the mysteries of life. Fortunately, Gregg Henry’s surefire direction keeps the numerous narrative strands from becoming entangled or getting lost in the vagaries of it all.

For many gay viewers, the real highlight will be earlier scenes depicting the ill-fated relationship between Joseph and Timothy.

Aiding Henry is a top-notch cast. As Joseph, Dinolfo is spectacular, perfectly portraying the varying shades of such a complex character as he struggles to cope with the demands of his boss and his family in addition to his own love life and his increasing health problems.

Tony Strowd Hamilton portrays Charles as the most open and secure of the play’s main characters, and provides much of the comic relief — not least when jabbing his older brother for acting more like a lesbian than a gay man. 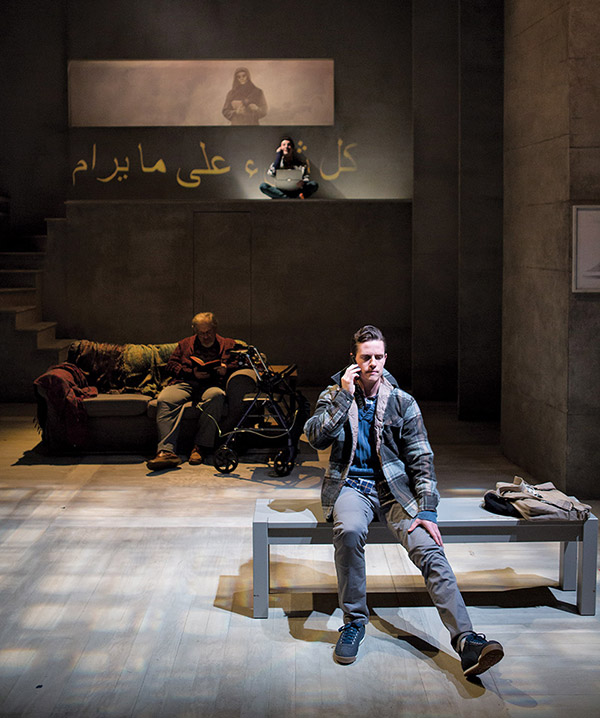 Brigid Cleary’s portrayal of Gloria as one of the neediest, most self-absorbed and most inappropriate people around is wonderfully realized. A veteran actor, Cleary makes Gloria a character you’ll love to hate, barging into the Douiahys’ lives uninvited, and having no sense of fear, shame or regard for the consequences of her actions.

While Sons of the Prophet finds rich comedy and dramatic tension in its final climactic scene at the school gymnasium, for many gay viewers the real highlight will be earlier scenes depicting the ill-fated relationship between Joseph and Timothy. It’s not often theatergoers get the joy of watching two male actors kiss passionately, strip each other, and engage in frolicking foreplay.

And all without being exaggerated or gratuitous, in the manner of matter-of-fact scenes we’ve become inured to with opposite-sex coupling. Like the rest of the play, it’s wonderful.

Check for Discount Tickets to Sons of the Prophet

Sons of the Prophet