Ungentlemanly: “A Gentleman’s Guide” at the Kennedy Center (review)

By Randy Shulman on January 23, 2016 @RandyShulman

On the surface, there’s nothing fundamentally wrong with A Gentleman’s Guide to Love & Murder. The opera-light score by Steven Lutvak is brisk, bouncy, waltzy. The book by Robert L. Freedman, based on the 1949 film in which Alec Guinness memorably and spectacularly played eight dimwitted members of an upper-crust British clan, is straightforward, while his lyrics, penned with Lutvak, are cleverly wrought. Director Dark Tresnjak’s staging is brisk, whimsical, and occasionally borders on the sublime, as with a scene that pays homage to door-slamming farce. The physical production, centered around an inspired proscenium-within-a-proscenium set that boasts a smartly utilized video wall by Alexander Dodge, is nothing short of genius. And the performances, especially John Rapson who takes on the multiple roles a la Guinness and the clear-voiced Kevin Massey as an errant cousin member who ascends his family tree, aiming for a Lordship, by offing his relatives one-by-one, are just about as perfect as you could hope for.

With all this in its favor, you’d think A Gentleman’s Guide to Love & Murder would make for a smashing evening at the theater. And yet the only thing smashed are the hopes that your two and a half hours would be well-spent. The evening washes over you like a tidal wave of meh.

Perhaps it’s the fact that the show was honored with a 2014 Tony for Best Musical. Either it was a slow year for musicals in 2014, or Broadway’s standards have plummeted severely. Regardless, the mantle of Tony raises one’s expectations — perhaps unfairly — through the roof of the Eisenhower Theater, where Gentleman’s Guide (

That’s not to say A Gentleman’s Guide is a disaster on the order of Matilda — whose tour, with its outrageously bad audio design, recently paid an unwelcome visit to the Opera House — but it’s questionable as to whether it’s worth your time or money. Perhaps the show is better suited to a more intimate environment — one could see Signature or Arena or even Shakespeare, which recently proved with Kiss Me, Kate that it can compete in the musical realm, mounting a production that might connect more directly with an audience — but the real problem is Lutvak’s score. It’s not just underwhelming, it’s unmemorable. At times it comes off like a bastard spawn of Andrew Lloyd Webber and Stephen Sondheim, but really it’s just aping Gilbert & Sullivan. Lutvak reaches beyond his grasp and comes up empty handed.

A great musical should make one rush out and buy the original cast album — or queue it up on Spotify. That doesn’t happen with Gentleman’s Guide. Instead, amnesia sets in the moment you’re homeward bound. If a musical — especially one awarded a Tony for its efforts — doesn’t have intensely great music throughout, does it even make a sound?

A Gentleman's Guide to Love & Murder 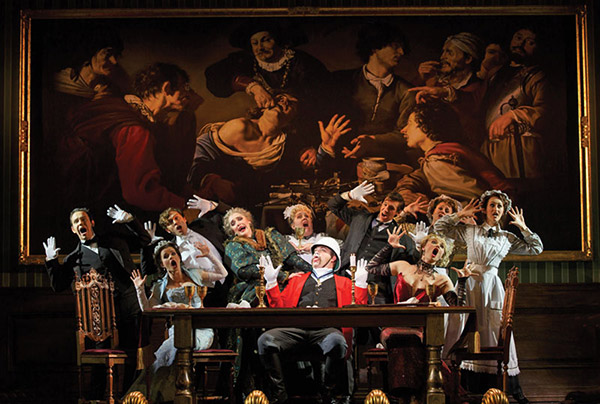