Being gay is no longer a problem on TV. With Empire, Modern Family and The Walking Dead all showcasing gay characters, among many others, the days of Will & Grace being the only gay content on our screens are long since over. What isn’t over, however, is the problem being gay can cause in reality — coming out may now seem passe to many, but for most it’s still an incredible pressure.

Enter, then, The Real O’Neals (

), a new sitcom from ABC that puts coming out and being gay front and center. Loosely based on the younger years of sex columnist (and conservative antagonizer) Dan Savage, it tells the story of Kenny, a teenager in a seemingly perfect, devoutly religious Irish Catholic family. The entire first episode is dedicated to Kenny’s coming out to his family, who, it transpires, are all hiding secrets of their own — divorce, anorexia, kleptomania. Not so perfect, after all.

If viewers are expecting the same raunchy, edgy, witty comedy Savage is known for, they’ll be disappointed — it’s here, certainly, but severely watered down for broadcast television. While The Real O’Neals opens with a number of potential plotlines for its characters, several are gone by the second or third episode. Kenny’s dimwitted brother professes an eating disorder, but it’s swept aside by Jesus-shaped pancakes. Kenny’s controlling, religious mother initially rejects his sexuality (to hilarious effect), but by the third episode she’s a reluctant ally.

That’s not to disparage it, but what we’re getting is a show that clearly underwent retooling after the pilot to more closely adhere to the reliable comedy mold established by Modern Family and continued by pretty much every other ABC family-led sitcom since. And you know what? It works — here, especially so.

As Kenny, Noah Galvin steals the show. His reactions — whether to his soon-to-be-ditched girlfriend asking him to try her “papaya,” or his mother asking him to go back in the closet for Lent — are wonderful. Expressive, hilarious, perfectly timed. Galvin also narrates each episode, handling the rapid, witty dialogue with ease. What’s more, he’s gay in real life, and while there are some excellent straight actors who can play gay with aplomb, there’s a tangible nature to watching an openly gay actor reenact a coming out scene, or dealing with a first day being out at school, that makes it all the more believable.

The rest of the cast ably sells the material, too. As Eileen, Kenny’s devout, controlling, perfection-obsessed mother, Martha Plimpton balances neurotic tendencies with obvious love for her children. When she finally accepts her son in the show’s third episode, there’s bound to be more than a few viewers who can empathize with the emotions on display. Jay R. Ferguson brings warmth and heart to Kenny’s father, Pat, a Chicago Police Officer who has spent two decades letting his wife make every decision, and now has to relearn how to function as his own man. Bebe Wood steals every scene she’s in — just like in NBC’s gay (and canceled) sitcom The New Normal — as Shannon, the youngest child who’s also the family’s dark horse. “Who are you?” Kenny asks, when he learns she keeps a bag of lice on hand to provide a valid reason for cutting school and heading home. Matthew Shively offers a reliable performance as dense, dimwitted oldest child Jimmy, who comes into his own during the show’s fourth episode, after watching Game of Thrones and vowing to protect Kenny from homophobic bullying.

In the four episodes released at the time of writing, The Real O’Neals has established itself as a charming, laugh-out-loud addition to the ABC sitcom stable. Each episode contains at least a couple of standout moments: Pat trying to cope with Shannon’s first period, the family coming up with new nicknames after Pat reveals he was bullied for being fat (“Patrick O’Besity!”), Kenny’s first date and subsequent fantasy dance sequence. Actually, pretty much every fantasy sequence Kenny has, be it talking to a male model, Jesus, or Jimmy Kimmel.

Whether The Real O’Neals will make it to a second season is anyone’s guess — sitcoms have had a rather brutal time of late — but it certainly deserves to at least have a fleshed out first season. By its fourth outing, “The Real F Word,” it has gained its footing and proven that it can deliver reliable laughs alongside ABC’s other sitcoms. Being gay on TV may no longer be revolutionary, but it can still be pretty damn funny.

The Real O’Neals airs Tuesdays at 8:30/7:30c on ABC. Past episodes are available on Hulu and at ABC.com. 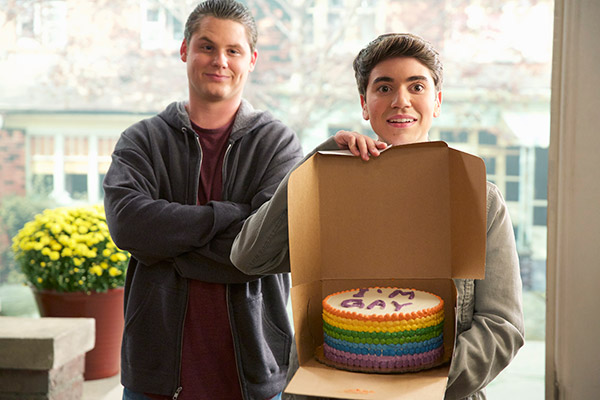