Shakespeare Theatre's 1984 is constrained by the source material's faults, but is still an enthralling concept piece 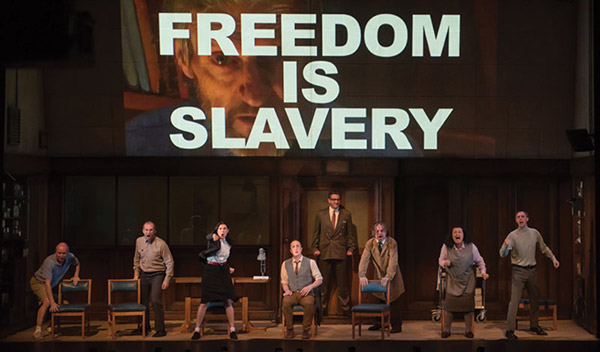 Dystopia is seriously in. From Suzanne Collins’ The Hunger Games trilogy to George Miller’s Mad Max: Fury Road, it’s all about surviving an oppressive world with a rebellious heart.

But if George Orwell’s novel 1984 is the granddaddy of the genre — and all subsequent references to Thought Police and Big Brother — it is one devoid not only of CGI, but of optimism. There are no cathartic moments of physical or moral heroism, no hints of a new dawn. It is, rather, an ode to grim endurance and failure of the spirit. It is contemplative warning, not blockbuster entertainment.

So in adapting the book into a theatrical experience, directors Robert Icke and Duncan Macmillan have something to overcome. Not only are the concepts of 1984 so familiar as to be almost banal, audiences are now heavily saturated in far more dramatically realized and exciting — if not conceptually sophisticated – dystopias. They have also likely seen Michael Radford’s resonant film version.

) is original enough, immediate enough, to carve out its own space in the cultural miasma. It works because the tightly-paced adaptation is not just true to the novel, but also — subtly and surely — to the twenty-first century. There may be only one actual reference to people obsessed with their screens, but the overarching way in which it weaves in the unmistakable hallmarks of the digital and CCTV age is highly relevant and affecting. Indeed, it is impossible to experience this interpretation without sensing that there is a new kind of thought control afoot: the Internet.

And it is an insidious control. Like anything human, the crassest, most easily-digested trends and ideas are the ones pervasively, persuasively pushed to the top. They arrive by the minute, like so many viscous tides, leaving their residue in the TV and movies that follow. We may scoff or click away but we are all being “messaged” by those who have decided the lowest common denominators (infantile storytelling, consumerism, porn), and the lights are bright, the images irresistible, and the soundtrack unstoppable. It begs its own Orwellian question: how much of what we think is truly our own? The only way to know is to unplug and wait — and that’s one rebellion no one seems eager to join.

Such thoughts are triggered here with the extraordinary video, sound and lighting designs of Tim Reid, Tom Gibbons and Natasha Chivers. While the explosive sound and light create a powerful sense of anxious anticipation, the video imagery comes and goes like a silent, ambiguous presence. It is the ghost in the machine, be it Internet, brain or The Party. It is a powerful example of how size, font, and color can become not just communication, but also art and commentary.

Within this digital/surveilling cocoon, the narrative moves between the real and the surreal, inviting deep contemplations of what reality is/should be and where the bounds of reason may lie. If it occasionally, by necessity, dances along the edge of the tedious, the excellent ensemble does much to yank it back from the precipice with their lively and interesting characterizations.

As protagonist, much is driven by Winston, the repressed citizen at the heart of Orwell’s story, and his struggle to understand and resist Big Brother and its spies. Matthew Spencer offers a convincing effect of haunted eyes and contained agitation as he grapples with his “criminal” thoughts. But Spencer is best at his lowest key. When it comes to the scenes of anger or torture he overplays. It is understandable on one level — he must move the mood from a dream-like pace and perception to the hyper-real visceral horror of torture — but it is too great a leap. Winston is a man tightly caught within his own mind. His anger and even his physical agony must be expressed through this same tightly-wound prism. And as sweet-faced as Spencer is, there is nothing vulnerable in his Winston. Without evidence of this human, tender spot, it is hard to care where the rats end up.

Looking a good love match for Winston, Hara Yannas’ Julia is convincingly ambiguous as stranger and then lover, defying the norm with an interesting blend of the languid and the intense. It is original and memorable and a reminder that there are more ways to represent women than what screens, little or large, would tell us. There isn’t much to be done with Orwell’s dated depiction of women as more hanger-on than thinkers, but her slightly dreamy demeanor helps explain it.

The other standout is Tim Dutton as O’Brien. As representative (ultimately) of The Party, he must personify all that is oppressive. In the wrong hands, this could default to a tiresome, intoning officiousness. But O’Brien is credible and interesting because Dutton underplays the gratification he takes in destroying Winston’s spirit.

The rest of the ensemble deliver well-crafted characters, each adding to the mood and context. Simon Coates particularly impresses with the convincing demeanor of Parsons, who makes a subtle transition from certainty to doubt.

And so, as closely as this play may hew to the novel, it is not an “entertainment.” Expect an enthralling, well-conceived concept piece and you won’t be disappointed.