Ratchet & Clank may retread familiar ground, but it does so in addictive, engaging, and beautiful fashion 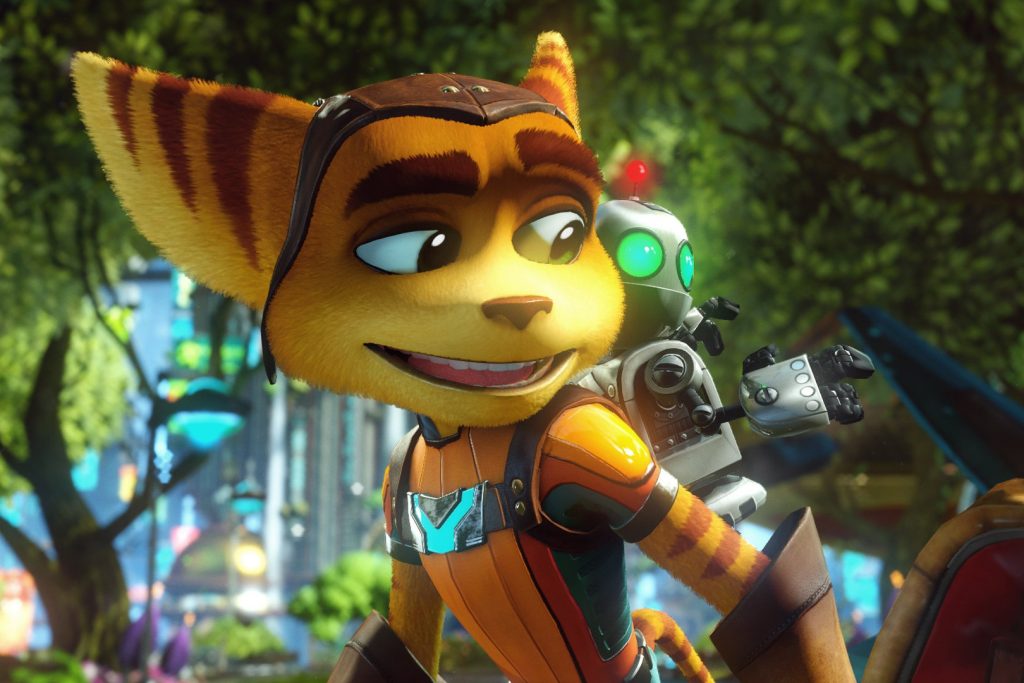 This generation of consoles has become something of a punchline for relying on dressing up older games in high-def clothing in order to provide content. As gamers cry out for more and better games to run on their Xbox Ones and PlayStation 4s, it can be all too easy to take a gaming classic, slap a fresh coat of digital paint on it, and demand hard-earned dollars. It’s perhaps with more than a hint of irony, then, that one of the best games released so far for either console isn’t a new game — it’s a remake of a 14-year-old PlayStation 2 classic.

) on PS4 isn’t strictly a remake. Instead, it’s a “reimagining” of the original, through the lens of a soon-to-be-released animated film, that is itself a remake of the story told in the PS2 version. Still with us? As such, while a lot of the content will be familiar to anyone who played through the duo’s first game, there are tweaks, additions, and changes as a result not only of the film, but of the sixteen years Insomniac Games have had to further hone their craft. The end product is a game that’s as instantly addictive as it is intoxicatingly nostalgic.

For anyone not au fait with Ratchet and his robotic buddy clank, let’s get you up to speed. Clank is a “manufacturing defect” from a factory tasked with churning out giant, robotic soldiers. The tiny, self-aware robot escapes after learning that the Blarg, a fishy race ruled by Chairman Drek, plan to use the robots to take control of entire planets. Clank’s ship crashes on Veldin, home to Ratchet, a lonely Lombax. Ratchet dreams of being a Space Ranger — a group of heros led by Captain Qwark — and upon stumbling across Clank and fixing him up, the two set out to warn the Rangers about Drek’s plans. 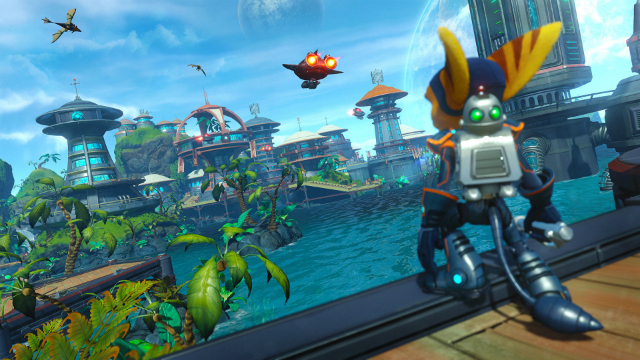 There are differences to the original story, however. Here, Qwark, an incompetent, deluded coward who loves the limelight, narrates Ratchet’s story to the inmates of a prison he finds himself in. It’s incredibly meta — a prisoner tells Qwark about a game based on Ratchet’s life, Qwark asks if he means a film, the prisoner responds that both are being released — and Qwark’s narration becomes a mainstay of this reimagined game. As you navigate through the various worlds in Ratchet & Clank, Qwark’s bombastic, blowhard narration will follow you, to frequently humorous effect. He’ll get exasperated if you wander off course, comment on certain actions, and praise himself should the player encounter any statues or memorabilia of Qwark in-game. It’s all Insomniac’s way of appealing to fans new and old — if this is your first encounter with the series, the story is here to entertain. If you already know what’s going to happen, there’s in-jokes, meta humor and Qwark’s narration to enjoy.

Really, though, the rich humor, gorgeously animated cutscenes (several ripped straight from the film), and well-paced story all take a backseat to the main star of the show: gameplay. Ratchet & Clank is bursting at the seams with the same wonderful, enjoyable, beautifully polished gameplay that has kept the series going across multiple games on multiple consoles.

At its core, Ratchet & Clank is a third-person platformer, with the duo bouncing around levels and exploring areas as they complete whatever arbitrary tasks have been assigned when they land on the planet. It’s everything in between, however, that makes it such a joy to play. The series has always been known for its outlandish, oversized weaponry, and here it’s no different. While Ratchet starts with his trusty OmniWrench for swatting at enemies and bashing open crates, players will quickly amass an almost bewildering array of weaponry. 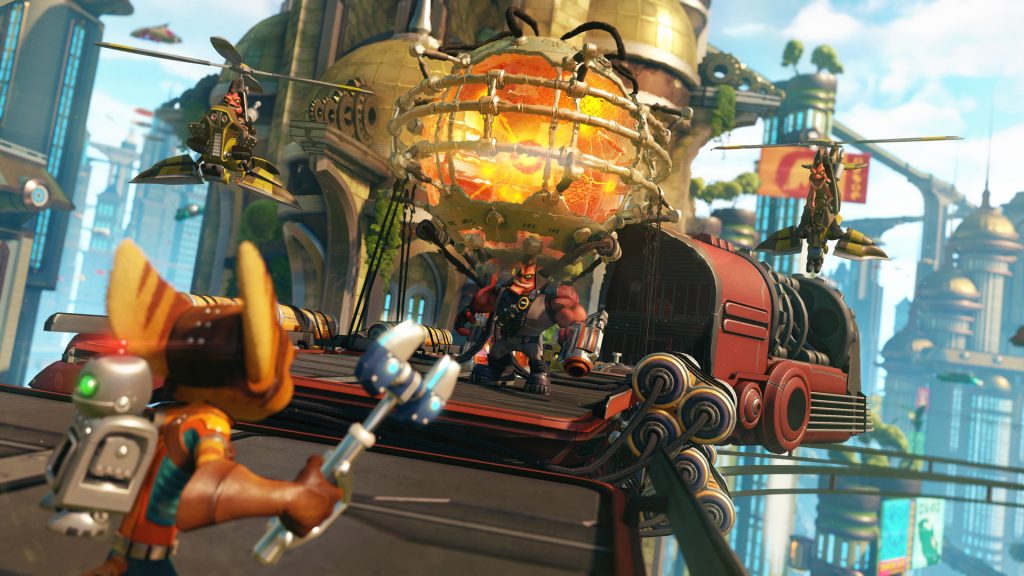 Many are from the first game: the Bomb Glove, which lobs deadly explosives at enemies; the Pyrocitor, which is essentially a supercharged flamethrower; and the Glove of Doom, which spawns kamikaze robots. But there are also several weapons from later games — and their inclusion here is greatly appreciated, as Insomniac crafted some truly inspired creations in the years that followed the original. They include the Sheepinator, which turns enemies into fluffy sheep; the Pixelizer, which turns enemies into giant, pixelated versions of themselves, complete with retro sound effects; Mr. Zurkon, a flying robotic sidekick who shoots enemies and makes frequently hilarious quips thanks to a sadistic sense of humor; and the Groovitron, one of the most famous weapons in the series, which lobs a giant disco ball that causes any enemy within range to be compelled to bust a groove, rendering them an easy target for other weapons.

Ratchet & Clank forces players to constantly mix up their arsenal, thanks in part to a paucity of ammo. You won’t always get ammo for the weapon you use most, so you’re encouraged to experiment with different setups. It helps that every weapon can be levelled up, making it more powerful, as well as upgraded to increase ammo capacity, or unleash more projectiles, or further its range, among others. Snipe enemies from a distance, run in, lob a Groovitron, break out Mr. Zurkon and then tag team dancing foes with rockets and gunfire — that’s just one of countless strategies for navigating your way through the game, all thanks to its slick controls and satisfying gunplay. 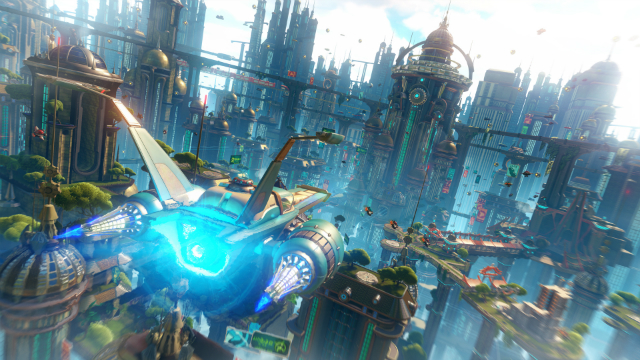 It’s also refreshing that, even fourteen years later, this isn’t an easy game. There’s a casual mode for younger gamers, but even on its normal setting, Ratchet & Clank isn’t afraid to challenge. Health and ammo appear frequently, but they’ll be drained frequently, too. Tightly choreographed platforming sections will test your hand eye coordination, waves of enemies will tax your aiming skills, while inventory management becomes key as you work through your ammo reserves — but the game is still so well balanced that, should you find yourself with just your wrench and a sliver of health left, it’s possible to dispatch enemies and advance to the next ammo and health cache.

Thankfully, one of the series’ biggest draws remains as addicting and compelling as ever: smashing stuff. Swinging your wrench through crates, lamp posts, toolboxes, signs, flower pots — anything that looks remotely destructible — rewards players with a shower of the game’s currency: nuts and bolts. Collecting them becomes a quest in an of itself, finding every nook and cranny in a level to extract as many as possible, then using them to buy new weapons or refill depleted ammo reserves. It helps immensely that each explosion, every shattering crate, all of those glimmering nuts and bolts that rain down on Ratchet and Clank look so incredibly beautiful.

Back in the hazy days of 2002, Ratchet & Clank was a revelation. Its vibrant color palette, impressive particle effects and expansive levels were a joy to behold. When the PS3 rolled around, Tools of Destruction wowed gamers with the power of Sony’s console, presenting a brighter, more colorful, more luscious experience. But with its outing on PS4, the series has reached an almost unbelievable new height. As beautiful as it is breathtaking, Ratchet & Clank is a constant, welcome assault on the retinas. Expansive, impeccably detailed vistas await, whether navigating a gargantuan, towering city, sliding along rails in a frozen wasteland, or blasting a jetpack over seas of lava. Lighting, texture work, character models, particle effects, weapon fire, enemy movement, destruction animations, graphics, holograms, 2D animated infobot cutscenes — whatever Ratchet & Clank throws at players, they can be assured that it will be impossibly pretty.

It’s matched by audio that’s as crisp as the animation. Dialogue, of which there is a lot, be it cutscenes, banter between characters, or Qwark’s narration, is among the best you’ll hear in gaming. The various weaponry on offer explodes, shoots, blasts and ricochets with a cacophony of sound. Music blends seamlessly between various genres, depending on location, danger level and whether or not you’ve just throw out the Groovitron — something you should absolutely be doing on a regular basis. 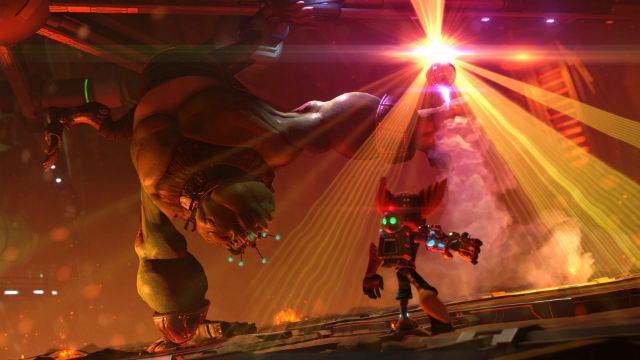 There’s also the added benefit of both longevity and replayability. Collectibles abound, including Gold Bolts, which unlock extras such as image galleries and cheats, and cards, which can be collected to unlock additional upgrades, weapons, or boost stats. Finding everything the game has to offer will suck up numerous hours. There’s also Challenge Mode, which is unlocked after beating the game. Players will start the story again, but keep all weapons, upgrades, and nuts and bolts. Enemies will be harder to beat and there’s the added incentive of unique, powerful upgrades to weapons — Omega versions, as they’re known.

It bears repeating, but it’s truly incredible that Ratchet & Clank is as good as it is. Even if you’ve played it before, that same itch to smash crates, obtain every weapon and find every nut and bolt quickly sinks in. For both new players and old, this is a beautifully rendered, wonderfully polished, eminently enjoyable game. Who cares that, in 2016, one of the best games out there is a title from 2002? When the end result is as good as Ratchet & Clank, it’s PlayStation 4 owners who are reaping the rewards.

Ratchet and Clank is available now on PlayStation 4.