Disgraced raises, but doesn't quite embrace, some of the increasingly vital questions of our time

Now is not the time to shy away from the complexities of what it is to be a Muslim in a post-9/11, post-ISIS America. Ayad Akhtar’s Disgraced (

) grapples with many of these important issues. Unfortunately, it’s just too blunt.

The main problem is that, as deeply interesting as Akhtar’s ideas are, he assumes too little knowledge. Those who will attend plays about Muslim Americans are going to be a lot further along in the dialogue. The thirst is for a nuanced treatment, not an education in the basics. It’s not that Akhtar never touches the complex or nuanced — he does — he just doesn’t leave himself room to explore.

Akhtar’s protagonist, Amir, certainly begins in an intriguing place. A successful lawyer, he and his wife Emily, an artist, enjoy a prosperous life in a New York condo with a million-dollar view. Amir is, by all accounts, a happy, modern male of rational mind and easy humor. He may be fully aware of his traditional Muslim roots, but he has long left them behind.

“In his quest to capture the complexity of his subject matter, the playwright also feels he must ensure that every character is seen as flawed.”

In order to explore him, Akhtar naturally wants to touch Amir’s pressure points. But the test feels far too contrived: when Amir is asked by his nephew Abe to help an Imam, who may or may not have been supporting terrorism, he has no such inclinations. When the rather frantically idealistic Emily turns the marital screws, he relents.

How could this couple have never discussed such matters before, what with the endless news coverage of all things terrorism? Yet Emily rides roughshod over Amir without any reference to their history on the issue. It simply doesn’t ring true.

Further problematic is the knock-on effect at work. Although Amir’s support of the Imam was apparently minor, it sets off a seismic shift. We learn of this in fits and starts: a boss won’t return his calls, two other partners challenge Amir on his ethnicity, and there is some kind of breakdown in a meeting. But this too feels contrived and far too remote from an Amir who simply keeps drinking and looking pained.

By the time a work colleague, Jory, and her Gallery-owning husband, Isaac, arrive for a dinner party, we know Amir’s world is quietly unravelling. But it still feels too much of a leap when a dinner discussion of ethnic identity, 9/11 and the Middle East, pushes Amir to enraged transformation. Social circuit-breakers in this demographic are strong. And, again, we simply haven’t learned enough of Amir to see how he could so profoundly revert to another identity. Akhtar doesn’t address Amir’s intelligence, self-knowledge, the years of belonging with other, intelligent thoughtful people.

Finally, in his quest to capture the complexity of his subject matter, the playwright also feels he must ensure that every character, not just Amir, is seen as flawed. This is full of truth, but life is never so systematic and it detracts from any sense of authenticity.

Still, there is no question that Akhtar shows an extraordinary ear for the complexity, logic (flawed and otherwise), and deep understanding of today’s discourse on religion and the modern man. Each of the ideas raised — the tensions within Amir, the modern tribal conflicts, and the naiveté of people like Emily — are important and deeply compelling issues in our times. They just deserved deeper exploration with more nuanced drivers.

Matters are not helped by uneven acting. As Amir, Nehal Joshi exudes the necessary warmth and intelligence but never quite convinces either as the swaggering cell-phone addict or later at his most primal. As gallery-owner Isaac, Joe Eisenberg brings some of the better humor of the piece, reveling in Akhtar’s amusing picture of an urban type. But Eisenberg also gets closest to a genuine kind of grappling when it comes to the showdown with Amir. His anger builds in appropriate fits and starts — does he really want to argue with his host? — and when he lets rip, it feels far more convincing. The subplot involving Emily falls flat, but with a jam-packed agenda, there was never going to room for more than a sketch.

Emily exists merely as the voice for the PC left and as plot-mover, and virtually nothing else. This is certainly a challenge, but Ivy Vahanian does little to get beneath her surface, even when the opportunity arises. It kills any chemistry between her and Amir and does nothing to help build the emotional power that one must feel to understand and “get” Amir’s anger and his agony. Amir’s colleague Jory, is also sparely-drawn, which begs the question of where Akhtar sees the modern American female in his depiction of this national dialogue. Felicia Curry does her best with some rather stilted dialog and one-liners and injects as much emotion as the truncated events allow. 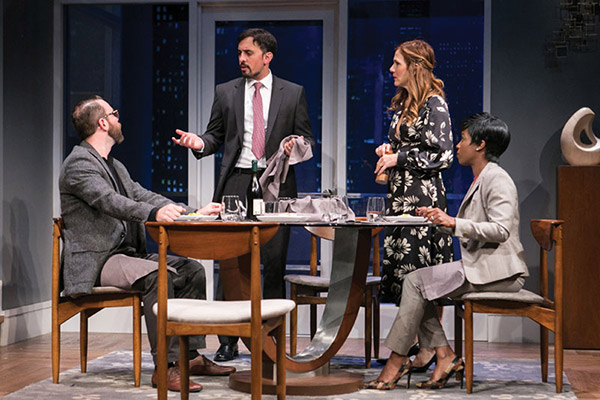