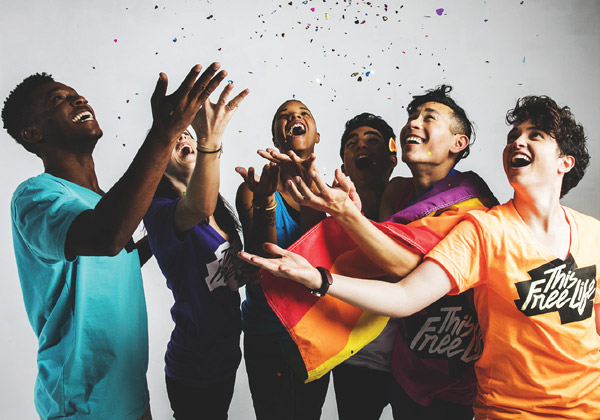 “Smoking has become a part of our lifestyle, but it doesn’t have to be,” says William Furmanski. “Being gay is all about knowing yourself and feeling the freedom to be who you are.”

Furmanski is senior vice president of communications for the Truth Initiative, an organization that is trying to build a tobacco-free generation. As a gay man, he’s “thrilled” that the U.S. Food and Drug Administration is on a mission to change smoking’s role in LGBT culture. The “This Free Life” campaign is the FDA’s first major campaign to address tobacco use within the community, the prevalence of which is attributed to several factors, including coming out.

“The coming out process can be stressful and is a period of increased vulnerability, which can lead to tobacco use and other behaviors with negative health consequences,” says Richard Wolitski, acting director of the U.S. Department of Health and Human Services’ Office for HIV/AIDS and Infectious Disease Policy. “This is a unique tobacco use risk factor for LGBT young adults that’s due to the actual and perceived social stigma, discrimination and anxiety experienced during this process.”

Wolitski, who is also gay, says many LGBT young adults find a sense of community at bars and clubs, which have environments that encourage tobacco use. LGBT influencers openly promote tobacco use, establishing smoking as a norm within the community. LGBT people are also targeted through advertisements in LGBT outlets, sponsorship of events, and funding of LGBT organizations.

For a community that has typically been underserved by tobacco prevention campaigns, the “This Free Life” campaign is primarily aimed at LGBT young adults between the ages of 18 and 24 who smoke occasionally.

“We find that the issue of social smoking, or casual smoking, or occasional smoking is more and more common and it’s something that we have to break the mentality around,” says Furmanski. “A smoker is a smoker. Every cigarette that you smoke has the potential to do damage.”

Of the more than 2 million LGBT young adults ages 18 to 24 in the United States, more than 800,000 are occasional smokers, says Mitch Zeller, director of the FDA’s Center for Tobacco Products.

“Unfortunately, research tells us that LGBT young adults often don’t consider themselves to be smokers and don’t understand the associated health risks,” Zeller adds. “That’s why ‘This Free Life’ is aimed at making LGBT young adults aware that there is no safe amount of smoking and that even the occasional cigarette can have serious health implications and lead to addiction.”

“This Free Life” partners with influencers to challenge the perception that tobacco use is a necessary part of LGBT culture. The FDA has enlisted RuPaul’s Drag Race alumni Shangela, Manila Luzon, Trixie Mattel and Tammie Brown for a special anti-smoking PSA, “Be Known for Your Flawless.” Each queen highlights a specific feature they’re known for — Shangela’s skin, Trixie’s nails, Manila’s hair and Tammie’s smile — before lightly hammering home the point that smoking puts their flawlessness at risk. The campaign is trying to appeal to the LGBT community’s desire for authenticity and freedom to deter tobacco use.

The campaign will reach young adults through print, digital and social media campaigns over the next 24 months in media markets with high concentrations of LGBT young adults and areas of high smoking prevalence, including Los Angeles, New York City, San Francisco, and D.C.

“Most people do not smoke, and they don’t want to, and this campaign speaks to that, but more importantly it speaks to the idea of being free of nicotine addiction,” says Furmanski. “We want to break the social norm that smoking is done by everyone and that it’s completely acceptable.”