The profoundly mediocre Star Trek Beyond begs the question: Is it time to decommission Kirk and company? 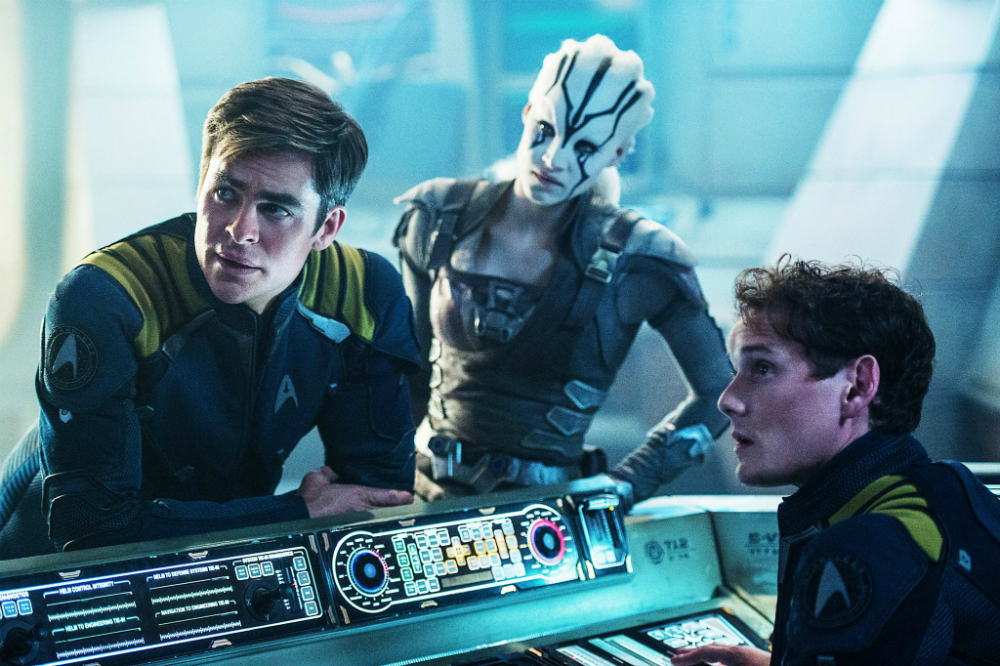 There’s a moment near the end of Star Trek Beyond in which Spock (Zachary Quinto) gazes at a photograph of the crew of the Enterprise. It’s the old crew — judging by the uniforms, probably around the time they encountered Khan — now from an alternate timeline, a timeline that was replaced, altered, reshaped in 2009’s Star Trek in a clever reboot of the series by J.J. Abrams that left The Next Generation behind and returned to the less sophisticated, less cerebral days of Captain Kirk and company.

The restructuring worked in that first film, replete with Star Trek-style bonhomie, perilous situations, a hellbent-on-revenge Romulan villain with a ridiculously massive ship, and even some surprises, as in the sudden appearance of Leonard Nimoy’s Spock, who confronted his younger self and offered some friendly advice. Doused in too much blinding lens flare, the film brimmed with a sleek, clean, modern sensibility, and it recast Star Trek as a shiny new toy. The prospects for the crew of the Enterprise and their “five year mission” seemed promising.

That promise dimmed with Into Darkness, the 2013 sequel. It wasn’t Star Trek at its worst, but it most certainly wasn’t the series at its best. Abrams, intent on paying homage to the original, took the plot of 1982’s The Wrath of Khan and gave it a tweak. The film, which featured a villain hell-bent on revenge, was at once plodding and overdone, quite the achievement, and it had its fair share of groaner moments, notably by trading the dramatic, iconic death of Spock for the resoundly less-dramatic death of Kirk (Chris Pine), whose full resurrection took only a vial of blood and a few minutes rather than the creation of an entire planet and two more films.

The promise is dimmer still in Star Trek Beyond (

), which finally presents us with an all-new storyline featuring an all-new lizard-skinned villain similarly hell-bent on revenge. Krall (Idris Elba), plans to use a devastating bio-weapon against the Federation. His motive, when revealed, is meant to have profound emotional resonance, but produces more of a “What? This? Again?” If the series has to plunder plotlines from its past, why not freshen it up with another go at the Borg or usher Q in to mess with everyone’s head? At this point, I’d even settle for a storyline involving Ferengi.

The narrative begins with the Enterprise’s arrival at the Yorktown, a majestic, globe-shaped spaceport that is so pristine and sparkling, it might as well be wearing a sign that reads “Blow Me Up.” The Enterprise soon finds itself on a rescue mission, venturing into an uncharted nebula where a nasty trap awaits, resulting in the ship’s destruction (yet again) by a hive of about a million small ships, commandeered, Queen Borg-like, by Krall. When, later in the film, the impossible space swarm descends on the Yorktown, you wonder why Krall needs an ancient bio-weapon at all to wreak havoc. Why not just have the swarm engulf the glassy globe and be done with it? Instead we get a fist fight, in anti-gravity, between Krall and Kirk. Boring.

The screenplay by Simon Pegg, who also plays the ship’s engineer, Scotty, and Doug Jung, adheres to the tenants of Star Trek, and tries to keep the script buoyed with humor, most of which is delivered by Spock and Dr. McCoy (Karl Urban), who make the best of being stranded together by carping at one another. 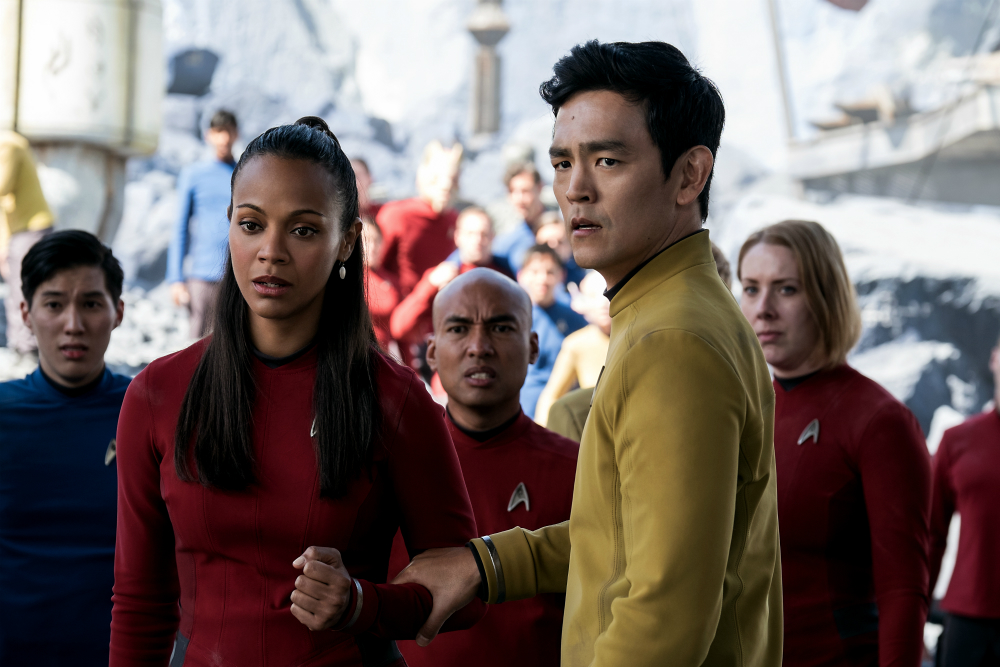 Pegg, Jung and director Justin Lin heighten the message of nonchalant inclusiveness — an ethos creator Gene Roddenberry instilled in the TV series from its get-go in 1967 — notably by briefly depicting Sulu (John Cho) with his arm lovingly draped around the shoulder of his husband and having Kirk react approvingly in a cutaway. The writers seriously overstep when Spock is brought, uncharacteristically, to the brink of tears. Sure, he’s half human, but Vulcans don’t cry. They just don’t. It’s too much.

Despite the new(ish) plotline, Star Trek Beyond continues to pay homage to its past with Pegg and Jung grafting ideas from previous films, such as the ship’s main saucer crash from Generations. They even venture outside the canon, lifting an idea from Tim Burton’s Mars Attacks, hoping no one would notice the blatantly shameless steal.

Ultimately, Star Trek Beyond is an unforgivably dull slog through territory meant to feel familiar and comforting, but is simply blasé. There was a time when Star Trek films were rousing and fun. Whether it was with the original cast or those affiliated with The Next Generation — who only had one truly spectacular celluloid outing, First Contact — Star Trek strove to be more than a typical sci-fi movie. It operated from a strict formula — most series do — but when the mix was right, the formula was near perfect.

Star Trek Beyond doesn’t reach the lows of Nemesis or Insurrection or even the initial woebegotten, needlessly bloated attempt at bringing the series to the big screen in 1979 (from which, incidentally, Beyond pilfers its main poster). But nor does it do much to push things forward, to boldly go in new directions. J.J. Abrams unshackled the series in 2009, but they’ve been playing it extra-safe ever since. When Kirk bemoans that things aboard the Enterprise have gotten a little “too episodic,” it resonates. The series is running on the fumes of legacy at this point. It has flashes of inspiration, but by and large it’s not that interesting. We’re attached to it only because we’re attached to the triumvirate of Kirk, Spock and McCoy. We have a love for these characters who we never want to see die. Nor does Hollywood, for that matter, which rakes in millions off their adventures, even though the box office take is noticeably shrinking.

Which brings us back to that picture. When current Spock looks at the original cast — or crew, as it were — we’re overcome with nostalgia. We realize that, while this cast is doing an able job at imitating our idols, they’re no replacement for the real thing. By constantly reminding us of previous Treks, the new Star Trek can never fully claim triumph of its own accord. It’s a mimicry of the original, a good one, but a mimicry nonetheless. Unable (or unwilling) to dispense with characters so firmly embedded in our cultural consciousness, Star Trek is lost in its own nebula. Something new, something drastic is needed — but Hollywood isn’t willing to take those kinds of risks, so they’re stuck. And we’re stuck with what they give us. And we pretend to be enthralled with it simply because it’s Star Trek.

Star Trek Beyond is now playing in area theaters. For tickets, visit fandango.com.

Star Trek Into Darkness plays this Saturday night, July 30, at Wolf Trap, with the NSO, conducted by Emil De Cou performing Michael Giacchino’s score live to the movie. (If you’ve never seen this, it’s actually quite amazing.) Tickets are $38 to $58. Visit wolftrap.org.

Randy Shulman is Metro Weekly's Publisher and Editor-in-Chief. He can be reached at rshulman@metroweekly.com.
← Previous Story Absolutely Fabulous: The Movie (review)
Next Story → Taste the Rainbow: Baltimore Pride’s Rainbow Fest