Governor has come under scrutiny after leaving threatening, profanity-laced voicemail for a state representative 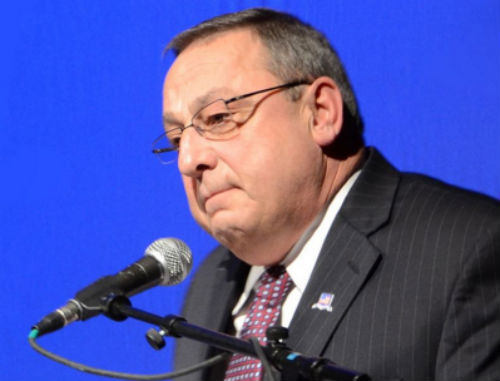 “I’m looking at all options. I think some things I’ve been asked to do are beyond my ability. I’m not saying I’m not going to finish it…. If I’ve lost my ability to help Maine people, maybe it’s time to move on.”

–Maine Gov. Paul LePage (R), in a radio interview with Bangor talk radio station WVOM, in which he suggested he may not finish his term as governor, which ends January 2019. LePage has received criticism, including calls to step down or seek treatment for anger issues, for leaving a profanity-laced voicemail on the answering machine of a state representative with whom he had been feuding. LePage called the legislator, Democrat Drew Gattine, a “son-of-a-bitch, socialist cocksucker,” as first reported by the Portland Press-Herald.

During the radio interview, LePage apologized repeatedly to Gattine for leaving the voicemail. He also said he plans to invite Gattine for a face-to-face meeting. LePage left the voicemail after being told that Gattine had called him a racist, something Gattine denies, although he did criticize LePage for using racially-loaded language when speaking about Maine’s heroin addiction and opioid abuse problems, which LePage attributes the proliferation of to out-of-state black and Latino men who come to Maine to sell drugs.

“When I was called a racist, I just lost it, and there’s no excuse,” LePage said, comparing the idea of being called racist to “calling a black man the ‘N’ word or a woman the ‘C’ word.”

Democrats say LePage’s apology falls short and feel the governor should be punished. Even though some Republicans have floated the idea of censuring the governor, Democratic leaders believe a censure vote is not a harsh enough reprimand. Some Democrats have even raised the possibility of impeaching LePage.

“Today Maine finds itself in a situation where leaders and legislators of both parties agree that the governor is preventing the people’s business from getting done,” Democratic legislative leaders said in a statement. “A half-hearted, partial apology on a radio show does not get remotely close to addressing the core issue: Maine faces serious issues and its government is not functioning. This is not a partisan issue. People of good faith on both sides of the aisle as well as newspapers across the state are demanding the real action required to have a functioning government.”

Although he raised the specter of stepping down while on air at WVOM, LePage appeared to reverse course, taking to Twitter and tweeting: “Regarding rumors of resignation, to paraphrase Mark Twain: ‘The reports of my political demise are greatly exaggerated.'”

Republican legislative leaders are expected to hold a meeting later today to discuss what to do about the situation, after which they will propose a plan for reprimanding the governor for his actions.