Home / Arts + Entertainment / Stage / “Sense and Sensibility” at Folger (review): It doesn’t get much better

“Sense and Sensibility” at Folger (review): It doesn’t get much better

Sense and Sensibility's intelligent silliness will create theatergoers for life

There is something deliciously subversive in the Folger Theatre. Tucked behind the impenetrable façade of its namesake library, a building rubbing shoulders with the Supreme Court and the Capitol, you’d expect it to be offering some kind of stately, patriotic fare. But, like a small, crazy-fierce Roman Candle, the Folger keeps delivering all manner of gloriously innovative theater magic.

). Adapted with verve by Kate Hamill from Jane Austen’s classic novel, it is fast, funny, witty and ridiculous. But it is also incredibly adept at breathing hot and feverish life into an early 19th century tale of landed (and unlanded) gentry and their loves and losses. Originally developed and premiered by New York’s Bedlam theater company, the production stays true to the novel while playing with all of its parts, real and emotional. Sets run around on casters, chairs move with their occupants, emotional revelations become surreal light-shows and the fourth wall is more of a trampled hedge. It is high entertainment, with Austen’s wit, wisdom and observations of the human heart at its core.

A whirlwind such as this needs a powerful pair of heroines, and here Austen’s two Dashwood sisters are vibrant, memorable mainstays. As the calm and controlled elder sister Elinor, Maggie McDowell balances perfectly the inner tension between Elinor’s expectations for herself and her growing sense of despair as her chances for love look to be passing her by. It is a button-downed role and might easily turn stock, but McDowell keeps it warm and intriguing, with much understated but complex expression. The outgoing and volatile Marianne might also have slipped into something derivative, but Erin Weaver invests her with so much raw energy, anger and heart, she too is ceaselessly fresh and compelling. The chemistry between the sisters is palpable, their connection full of edgy authenticity.

Creating the sisters’ world and the people in it, the small ensemble take multiple roles — not just as characters, but in serving the inventive stagecraft. It’s by necessity a tight-knit group and under Tucker’s hand, the production’s many parts come, go and move with an incredibly pleasing energy and precision. Stealing his scenes, Jamie Smithson plays potential beau Edward Ferrars and his younger brother Robert. Smithson has the extraordinary ability to be utterly believable even while being hilarious. But as brilliant as his comedy may be, there is a skillfully understated subtlety about his Edward that keeps the awkward suitor original and interesting.

As for the smaller but bountiful roles, Jacob Fishel delivers a nicely comic turn as the dashing John Willoughby and in later revealing his tortured inner life, while Caroline Stefanie Clay invests her gossipy yenta Mrs. Jennings with mischievous irony. Michael Glenn makes it look easy carrying several roles and brings much charisma to his bombastic Sir John Middleton. Playing two mothers and the equivalent of an eighteenth century Valley Girl, Lisa Birnbaum has fun segueing between her characters and evoking plenty of laughs in the process.

Rounding out the social scene, James Patrick Nelson delivers a quietly appropriate Colonel Brandon, though he doesn’t quite convince as a final suitor, while Kathryn Tkel brings energy if not enough nuance to her matriarch Fanny Dashwood. In the smaller role of third sister Margaret Dashwood, Nicole Kang does a good job of channeling the insouciance of the very young.

It’s the whole that makes the mood and carries the day in this production and, like last season’s A Midsummer’s Night Dream, given a chance this play will win hearts and minds. It’s the kind of intelligent silliness that creates theatergoers for life among the uninitiated — and brings back the faith for everybody else. It just doesn’t get much better.

Sense and Sensibility at Folger Theatre 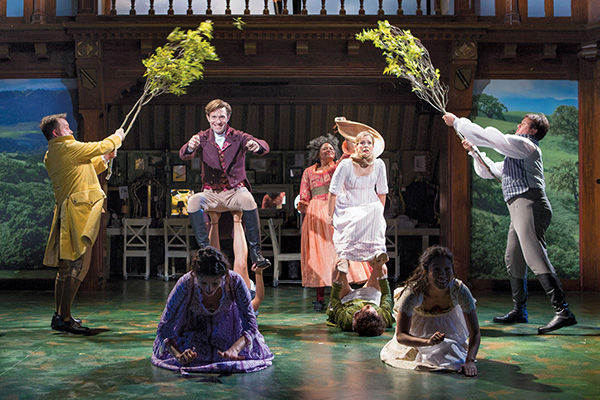