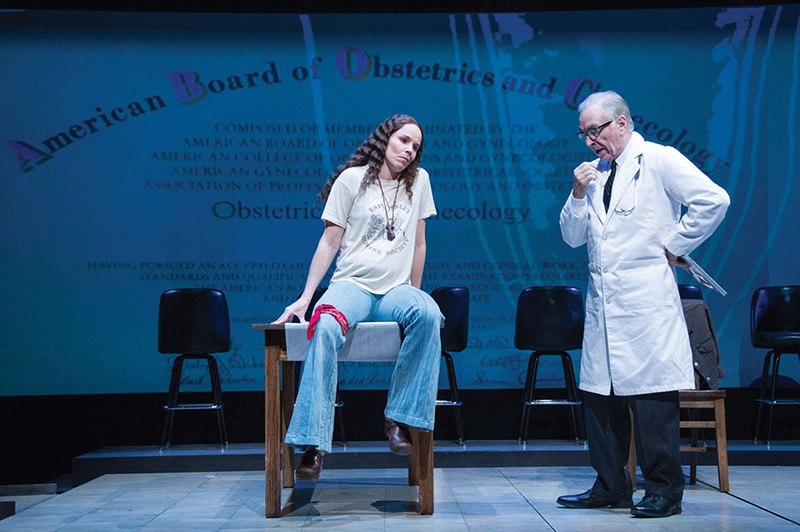 Capturing the takeaways much in the manner of a survey course delivered by a lively if slightly goofy professor, Lisa Loomer’s Roe is perhaps the most palatable way to get the backstory on the court case that stands — at least for now — for a woman’s right to choose.

Using a clever vehicle, Loomis plucks Norma (the Roe of Roe v. Wade) and Sarah Weddington (the lawyer who took her case to the Supreme Court) straight from the history books and drops them side-by-side, front and center. Given their chance, both vie to tell their respective stories, making the case for their decisions and letting history judge them good, bad, misguided or misunderstood. Delivered via flashback and narrative, dipping in and out of each other’s version of events, they show, tell and spar.

As a piece of theater, Roe (

) delivers with energy and inventiveness. Though the spare set at first suggests the empty chairs of the Supreme Court Justices, the minimalistic vibe soon explodes into a fast and furious blizzard of scene-setting projections, onstage costume changes, and era-defining music as the women begin to tell their tales. It’s an attention-getting and entertaining approach to what might otherwise have been an expository word-fest.

But it’s a fine line between witty wig-changes and the well-intentioned but hokie delivery of low-budget community-theater — and sometimes, under director Bill Rauch’s hand, the production teeters.

You can see the dilemma. With all the personal and legal history to get through, the complex facets of the debate, and the imperative of injecting as much human interest as possible, there isn’t much time to develop subtlety or nuance along the way. The end result is a dramatic glide-path that never really varies. Two-thirds of the way through, we already know pretty much all there is to know about Norma and Sarah: Norma never learned to love, only to use, Sarah struggled with her role as a driven professional woman in a sexist society.

This inch-deep, mile-wide problem isn’t helped by the color-by-numbers dialogue. Case in point: Norma’s befriending of the Operation Rescue Christians, who set up shop next door to the abortion clinic where she works. Though it may be interesting to learn about Norma’s about-face on abortion and her religious conversion, the scenes with the pro-lifers are practically cartoonish. Whatever truly allowed Norma to give herself over to these people is never even remotely explored.

The broad brush strokes challenge the leads, who must be compelling and believable and yet are forced to work with little more than vignettes and expository. As Norma, Sara Bruner’s answer is to play it with larger than life swagger. If it pushes her towards caricature, it does give her a powerfully strong persona. And why bother trying to be realistic with such unrealistic dialogue? 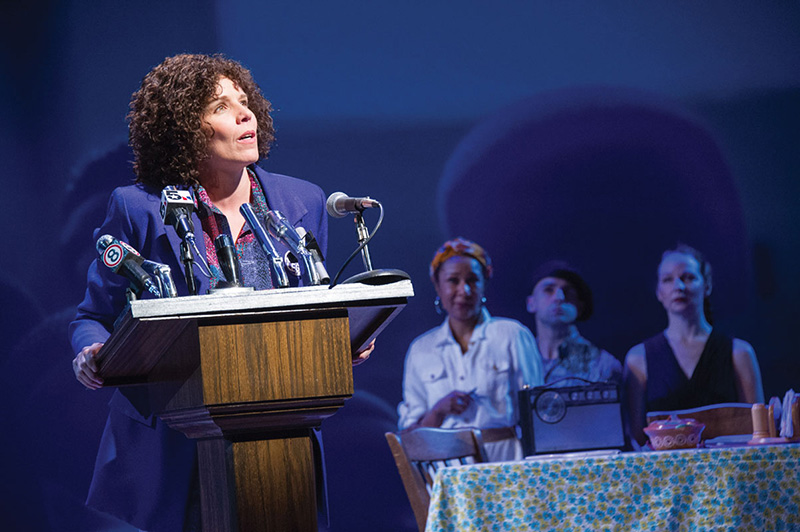 Confronting the same problem, Sarah Jane Agnew fills Sarah Weddington’s gaps with a kind of prissy, self-consciously poised affect usually found in 1980s romcom prudes. Despite this and despite being the one to deliver the lion’s share of legal lessons, Agnew does manage to offer a few of the more subtextual and ironic moments in the play, and even the odd glimpse of this woman’s inner landscape. But, just as with Norma, we are still left with little more than a sketch.

Of the solid ensemble playing a host of supporting characters, Susan Lynskey brings some of the best humor in Weddington’s bookworm assistant Linda Coffee, while Pamela Dunlap is pitch-perfect as Norma’s hard-as-nails mother, Mary. Perhaps the only performance here that gets into truly authentic territory is Catherine Castellanos as Connie Gonzalez, Norma’s long-suffering girlfriend. Quietly effective, Castellanos exudes far more than Loomis gives her to say and it works. As the young woman grappling with the legal here and now, Kenya Alexander does a good job in giving her Roxanne a credible urgency.

The other problem with Roe is that it simply goes on too long. Any number of junctures after the first hour or so would have made a lasting statement and served as a good ending. But Loomis labors on through the decades like someone is keeping score. It gets to the point that one starts to dread the next costume change, clever though they may be.

Still, Roe delivers a unique and valuable payload, with far more humor than one might expect. And it does it without idealizing or demonizing the people caught up in the debate. Like the complicated women at its heart, it deserves understanding, forgiveness and our full and unfettered attention.

← Previous Story Nicholas Rodriguez shares his love of ’70s music at Signature’s Cabaret Series
Next Story → “Hooded, Or Being Black For Dummies” at Mosaic Theater