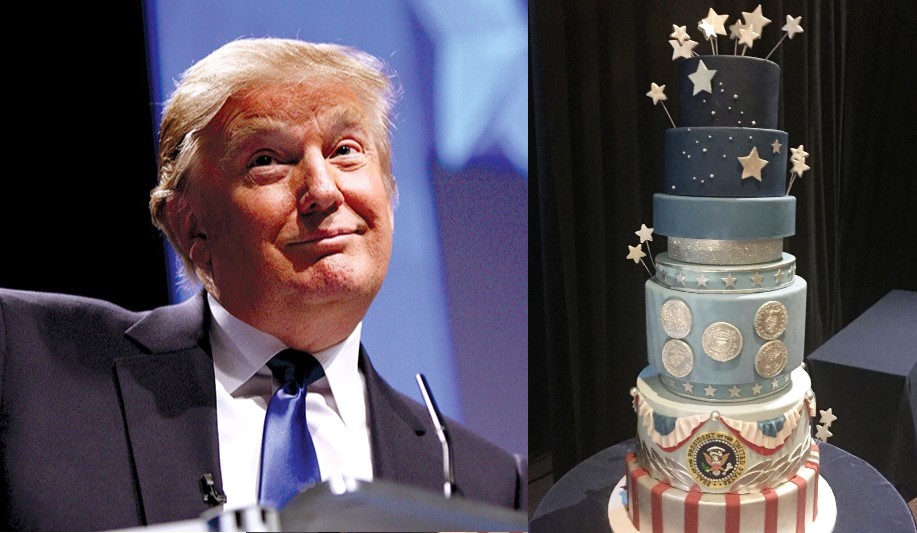 He wanted record crowds, but was dwarfed by the Women’s March on Washington. He wanted A-list performers, but had to settle for Toby Keith. He wanted mass celebration, he got mass protests.

However, one thing he successfully borrowed from Obama was the former President’s incredible cake. Trump’s inauguration cake was an exact replica of the towering treat created by pastry chef Duff Goldman for Obama’s 2013 celebration. The only problem? Goldman didn’t make it.

The cake on the left is the one I made for President Obama's inauguration 4 years ago. The one on the right is Trumps. I didn't make it. 🤔 pic.twitter.com/qJXpCfPhii

Instead, Trump’s cake was crafted by D.C.’s Buttercream Bakeshop.

“They came to us a couple of weeks ago, which is pretty last minute, and said, ‘We have a photo that we would like to replicate,’” Tiffany MacIsaac, owner of the bakery, told the Washington Post.

She also revealed that, unlike Goldman’s creation, only the bottom layer — the one Trump is slicing into in the photo above — is edible. The rest of the cake is Styrofoam. (That Trump’s cake is all grandeur, no substance is somewhat fitting.)

While the nature of the cake’s creation is confusing, there is at least some good news: Donald Trump’s team has accidentally donated to an LGBT rights organization. In a post on Instagram, Buttercream Bakeshop revealed that the profits from the cake are being donated to the Human Rights Campaign.

“Because basic human rights are something every man, woman and child — straight, gay or the rainbow in between — deserve!” the bakery wrote.

Excited to share the cake we got to make for one of last night’s inaugural balls. While we most love creating original designs, when we are asked to replicate someone else’s work we are thrilled when it is a masterpiece like this one. @duff_goldman originally created this for Obama’s inauguration 4 years ago and this years committee commissioned us to re-create it. Best part is all the profits are being donated to @humanrightscampaign, one of our favorite charities who we have loved working with over the years. Because basic human rights are something every man, woman and child~ straight, gay or the rainbow in between~ deserve!

It’s a welcome gesture, particularly given Trump’s presidency will be marked by one of the most anti-LGBT administrations in history.

Every LGBT Person Should Be Terrified of Trump’s Administration

Rhuaridh Marr is Metro Weekly's managing editor. He can be reached at rmarr@metroweekly.com.
← Previous Story Trump’s pick for Justice Department’s Civil Rights Division defended HB 2 law
Next Story → Lawyer claims Pulse shooting cops had to “get tested for AIDS” because of all the blood