Hooded, Or Being Black for Dummies (review): Deftly tweaks and subverts stereotypes

Hooded, Or Being Black for Dummies' is a deft examination of two young black teens from vastly different circumstances 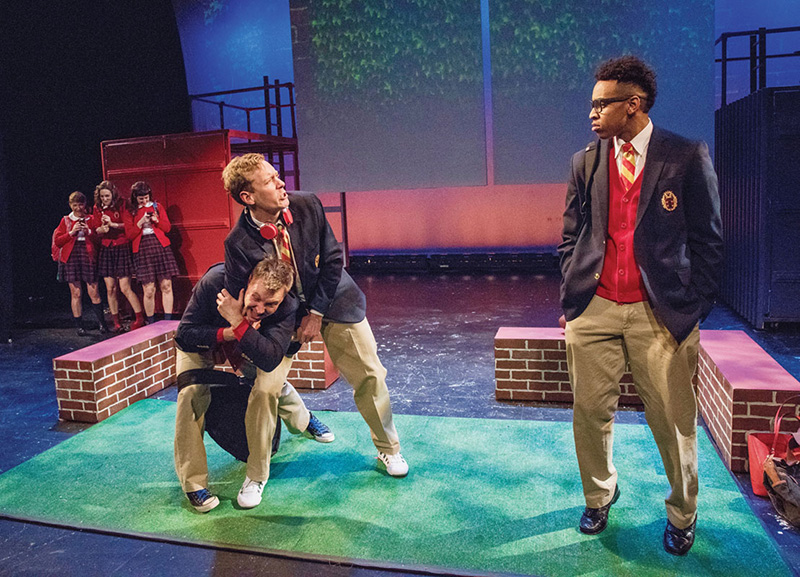 Hooded, Or Being Black for Dummies (

) doesn’t have time to dismantle every single stereotype characterizing or demonizing young African-American males in America, but it makes its bones deftly tweaking, deconstructing and subverting a few.

Stereotypes are what teens Tru (Jeremy Keith Hunter) and Marquis (Keith L. Royal Smith) first see in one another, after meeting in a holding cell in a Baltimore city jail. Likewise, the play leans heavily on stereotype to gain a few (too many) easy laughs at the expense of Marquis’ adopted mother Debra (Jennifer Mendenhall), a well-connected, white, suburban liberal, who races to rescue her black son from lockup and from the clutches of shady Officer Borzoi (Frederick Strother).

Before she arrives, Tru, a slang-slinging dropout from inner-city Baltimore, and Marquis, a blazer-clad, prep school goody-two-shoes caught trespassing, have a chance to delve beneath easy surface assessments. The play employs a tricky rewind and repeat device, restating and reframing information as Tru and Marquis circle each other over and over inside their cramped cell — part of scenic designer Ethan Sinnott’s inventively modular, moveable set.

The looping storytelling is a crafty formal conceit that adds layers of exposition — if not any discernibly urgent meaning — to Tru’s verdict, which comes swiftly. The way he sees it, preppy poindexter Marquis might be black, but he has no idea how it feels to have no prospects, no network and no net worth. As far as Tru is concerned, these are deficits synonymous with being black, so Marquis has no idea how it feels to be black. Strangely enough, adopted mom Debra agrees with Tru, whom she invites to come live with them in their cushy suburb. According to Debra, what’s Tru got to lose? 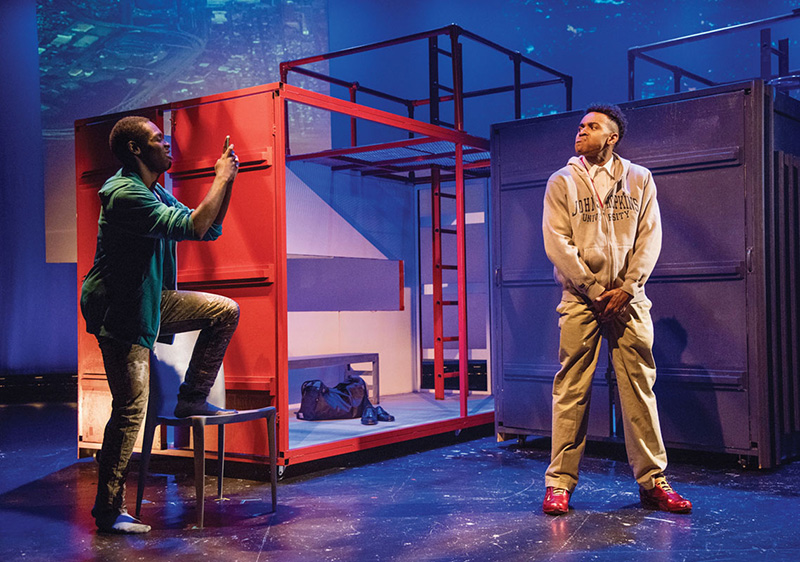 Depicted as a genuinely loving mother, Debra recognizes that the privileged upbringing she and her husband have afforded Marquis might have cost him a vital understanding of how the world at large will perceive him. Yet, despite granting her that insight, Hooded still portrays Debra as the sort of well-meaning but blinkered do-gooder who can cause as much harm as good by clinging to her own narrowly conceived, mostly untested notions of what it means to be black or white, rich or poor.

In director Serge Seiden’s smart, funny staging, it comes as a bit of a surprise to see Jennifer Mendenhall — daffy but warm as Debra — also playing Prairie, one of a trio of selfie-loving girls who attend school with Marquis and his impressionable buddies, Hunter (Dylan Morrison Myers) and Fielder (Josh Adams). The double-casting pays off with two inspired performances from Mendenhall, who’s joined by Myers and Strother in delivering wide-ranging turns, from brilliantly comic to grimly no-nonsense, each in multiple roles. As Marquis, Smith brings heart and wit to his and Tru’s quickly-formed and deeply felt brotherly bond.

The engine that keeps the show humming along, however, is Jeremy Keith Hunter as Tru. Fine in a relatively smaller role in Mosaic’s recent production of Milk Like Sugar, Hunter is dazzlingly fun to watch here as the fast-on-his-feet and fairly wise Tru, especially delivering the tenets of Tru’s guidebook “Being Black for Dummies,” the primer he writes to educate sheltered Marquis.

It’s no fault of Hunter’s that Tru comes close, perhaps intentionally, to Magical Negro territory, too ready with answers for whatever challenges Marquis might face. And in the late going, as the new friends’ worlds collide, the play starts to slide perfunctorily towards a conclusion that feels all but preordained in a story about a black kid in a hoodie. It might end with more of a whimper than a bang, but not before playwright Tearrance Arvelle Chisholm’s voice, authentic and original, has most clearly had its say.