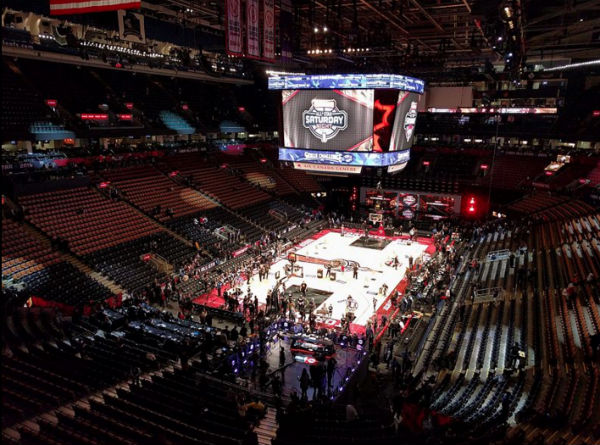 The arena for the 2016 NBA All-Star Game – Photo: Laslovarga, via Wikimedia.

The sports community is telling the Lone Star State “not so fast” when it comes to pushing through a discriminatory “bathroom bill” that would prohibit transgender people from using the bathroom that matches their gender identity.

The NBA is the latest organization to chastise Texas lawmakers for the bill, shooting off a warning that the bill could impact the state’s ability to host future sporting events. The league has already shown that it is willing to relocate games or tournaments to cities that are perceived as welcoming to all fans, including members of the LGBTQ community, as it did when it moved its All-Star Game, being held this weekend, from Charlotte, N.C., to New Orleans because of North Carolina’s anti-transgender HB 2 law.

“We consider a wide range of factors when making decisions about host locations for league-wide events like the All-Star Game — foremost among them is ensuring the environment where those who participate and attend are treated fairly and equally,” NBA spokesman Mike Bass said in a statement to FOX Business.

The NBA’s warning comes on the heels of a statement by the NFL warning Texas that if the anti-transgender bathroom bill, knowns as SB 6, were to pass, the states could lose the opportunity to host certain league events and future Super Bowls.

“If a proposal that is discriminatory or inconsistent with our values were to become law, that would certainly be a factor considered when thinking about awarding future events,” NFL spokesman Brian McCarthy said in a statement. “The NFL embraces inclusiveness. … We want all fans to feel welcomed at our events, and NFL policies prohibit discrimination based on age, gender, race, religion, sexual orientation, or any other improper standard.”

SB 6 is currently the chief priority of Lt. Gov. Dan Patrick, who is widely expected to run for governor in the future. Patrick, in his position as presiding officer over the Senate, reportedly has the votes needed to pass the measure in the upper chamber. But it may face a tougher hurdle in the House, where Republicans are more reticent to tempt fate by daring the NFL or NBA to strip away future chances to host sporting events. Patrick has previously dismissed NFL and NBA statements as posturing, noting that Houston was awarded the Super Bowl even after the voters of Houston rejected an LGBT-inclusive equal rights ordinance in 2015.

But LGBTQ advocates say this week’s NBA All-Star Game is evidence enough that sports associations are likely to follow through on their threats.

“It’s hard to deny that bills like SB 6 have a sweeping economic impact when hotel rooms and sports bars across Charlotte are sitting empty this weekend because of HB 2,” Kasey Suffredini, the chief program officer for Freedom for All Americans, said in a statement. “No one wins when the NBA or NFL is forced to yank their championship games out of a particular city, or when a business redirects planned investments somewhere else.

“But increasingly, the NBA and others are making it clear that policies like HB 2 and SB 6 — which intentionally single out transgender people for discrimination — aren’t aligned with their values,” Suffredini noted. “There will be consequences if Texas lawmakers continue forging ahead with their agenda of anti-LGBT discrimination.”

John Riley is the local news reporter for Metro Weekly. He can be reached at jriley@metroweekly.com
← Previous Story North Carolina governor grasping for deal on HB 2 repeal
Next Story → Opponents of anti-trans bathroom bill unleash fury on Texas Lt. Governor