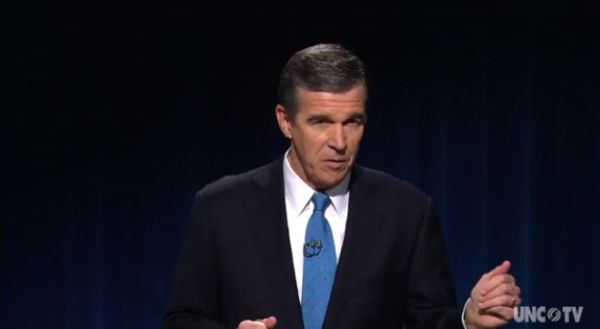 Despite the intransigence of leaders within the Republican-dominated General Assembly North Carolina Gov. Roy Cooper is still hoping for, and pushing for, a compromise measure that would allow the Tar Heel State to repeal the anti-LGBT HB 2 law that has caused the state to miss out on major economic opportunities.

Cooper has taken his case to the editorial page of The Charlotte Observer, outlining what he sees as a legitimate deal that would repeal HB 2 while also enforcing tough penalties on criminals who commit crimes in intimate spaces and ensuring that local governments are allowed to exercise some degree of self-rule.

“The situation is urgent,” Cooper writes in his op-ed. “Some companies considering expanding in North Carolina have said they’re having second thoughts because of HB 2. The NCAA will disqualify our state from hosting championships for the next six years — costing up to $500 million in revenue — if House Bill 2 isn’t repealed.”

Cooper and Democrats who hold the majority on the Charlotte City Council attempted to broker a deal by which Charlotte would rescind its LGBT-inclusive ordinance — which conservatives say sparked the need for HB 2 by prohibiting public accommodations, including public restrooms, from discriminating based on gender identity. In return for the repeal of the Charlotte ordinance, Republicans in charge of the General Assembly in Raleigh were expected to repeal HB 2.

But Senate Majority Leader Phil Berger demanded that there be a temporary moratorium placed on local governments to prevent them from passing LGBT-inclusive ordinances once HB 2 was repealed. Berger’s insistence on the moratorium sank the deal, throwing everything into chaos.

Under the terms of the new deal proposed by Cooper, lawmakers in Raleigh would repeal HB 2, while also strengthening penalties for criminals who commit crimes in public bathrooms or dressing rooms. While Cooper writes in the Observer that he believes this is a “manufactured issue” that attempts to smear LGBTQ individuals as sexual predators, he notes that “Republicans contend HB 2 is about security and safety. This addresses those concerns and increases penalties for crimes committed against anyone in this setting while also removing discrimination against the LGBT community.”

The third part of the deal would require local governments to notify the General Assembly and the public 30 days in advance of any proposed nondiscrimination ordinance that might extend protections to members of the LGBTQ community.

“Local governments are the closest to the people they represent, and I believe that they should be able to make these decisions on their own,” Cooper writes, urging Republicans in the legislature to vote on his proposal. “This compromise ensures that there is time for input on new ordinances.”

But LGBTQ groups have been largely lukewarm on Cooper’s proposal, as it would leave legal protections for LGBT people up to the whim of locally elected officials. A group of Democratic lawmakers has introduced a bill that goes even further, repealing HB 2 while instituting statewide protections in employment, housing, and public accommodations. Another Democratic lawmaker has introduced a bill that enhances penalties for sex crimes committed in intimate spaces, echoing Cooper’s proposal. But that bill has not gained as much traction among the bulk of the Democratic caucus.