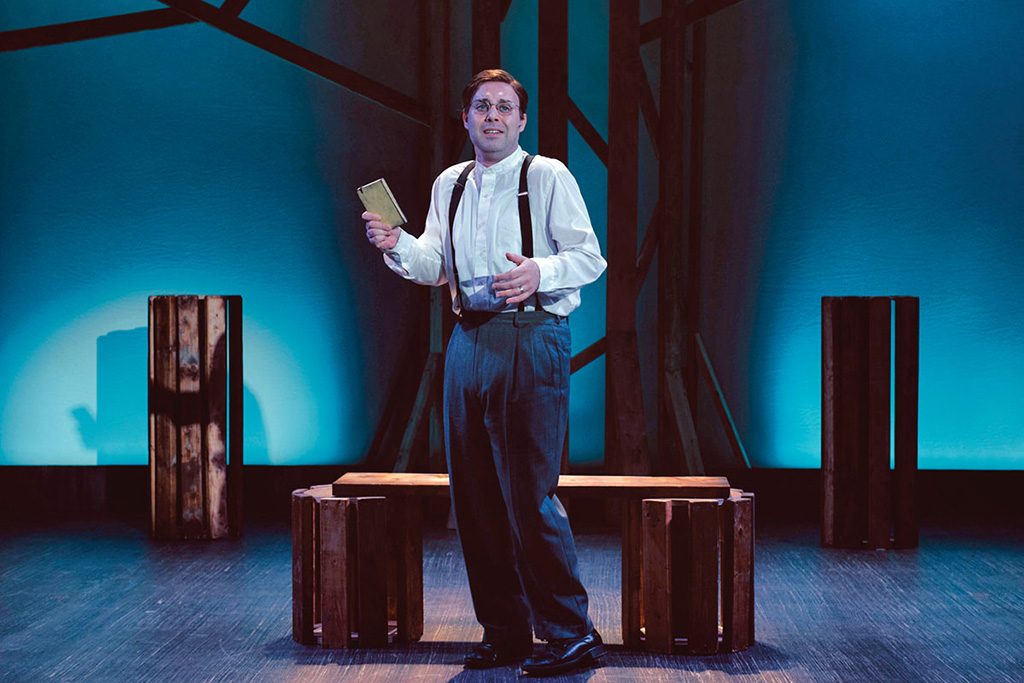 For better and for worse, the period musical Parade (★★★★), with music & lyrics by Jason Robert Brown (The Last Five Years) and book by Alfred Uhry (Driving Miss Daisy), trains a fairly narrow focus on the feelings and tragic fate of Leo Frank (Michael Innocenti). A Texas-born, Brooklyn-raised Jew living in Atlanta at the turn of the twentieth century, Frank was arrested and tried — in a Fulton County courthouse and across newspaper front pages — for the gruesome 1913 murder of 13-year old Mary Phagan. Phagan’s body was discovered inside the National Pencil Company factory, where she and dozens of other girls worked under the supervision of Frank.

Excavating this dark crevice of American history, Brown and Uhry’s 1999 Tony-winner encompasses a world of post-Reconstruction era concerns, from anti-semitism and mob justice to child labor, introducing sundry subplots and fictional supporting characters in its account of harrowing real-life events. But Parade‘s main concern is with illuminating the humanity of Leo Frank, an outsider egregiously scorned, and the loving husband to a devoted wife, Lucille (Eleanor Todd), who supported and suffered with him through the entire ordeal.

The Keegan Theatre’s insightful production, helmed by co-directors Susan Marie Rhea and Christina A. Coakley, employs a talented cast of twenty players essaying a town full of characters whose songs and actions plot out the particulars of Frank’s tale. Harrison Smith, appearing in dual roles, sings beautifully as the soldier whose lament opens the show in the heart of Dixieland, and Chad Wheeler supplies the right amount of slickness and fire in his portrayal of Tom Watson, the evangelizing local newsman who called for Leo Frank’s head.

While not all the voices onstage carry their weight, Ashley K. Nicholas brings nuance to every aspect of her performance as Leo and Lucille’s maid, Minnie. Timothy Hayes Lynch and Jennifer Lyons Pagnard, as Georgia Governor Jack Slaton and his level-headed wife Sally, add some much-appreciated tenderness and levity to the proceedings. Malcolm Lee, as janitor at the pencil factory, Jim Conley, a key witness for the prosecution, fills the house with the boisterous, devious energy of a man who might have said anything on the stand, as long as it served him well. 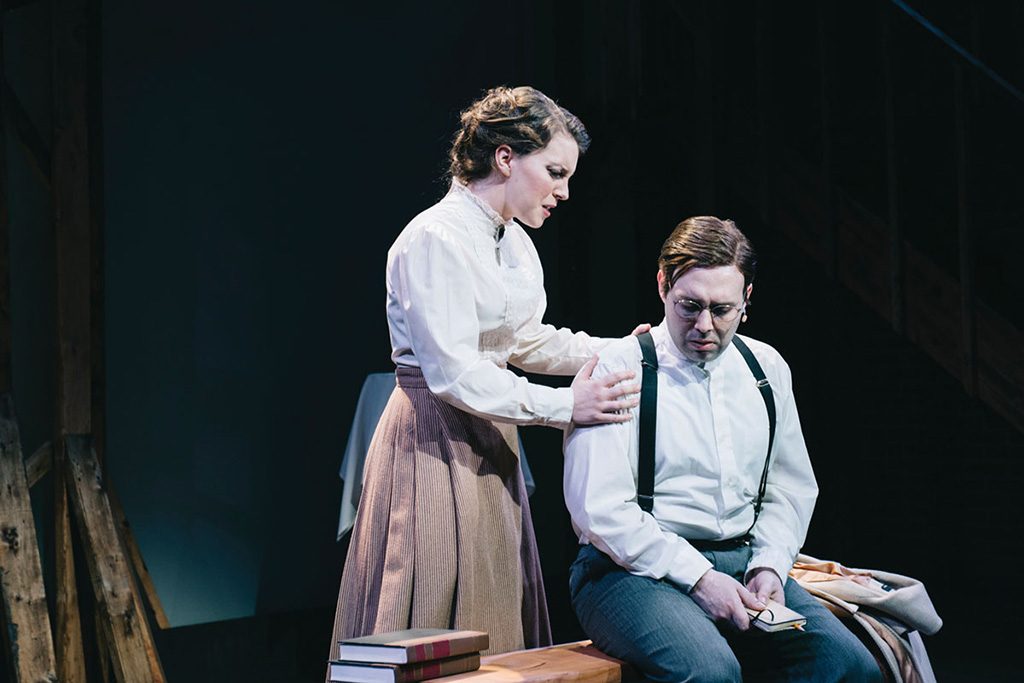 Still, the emotional journey rides squarely on Leo and Lucille, and the production is served tremendously by the talents of Innocenti and Todd. Possessing the surest singing voice on this stage (or on several stages), Todd exudes the unflagging warmth and backbone of a wife who loved and understood her peculiar, routinely abrasive husband and steadfastly defended him. Innocenti, ensconced within a production that often dares to be discomforting, delivers a Leo who is far from ingratiating, yet is all too relatable as a decent fellow ensnared in the frightening grip of circumstance. He grounds the portrayal in Frank’s understandable anxiety — about being a Yankee-educated Jew in a town that still celebrates Confederate Memorial Day — and tears into the songs’ fury and humor with gusto. “Why would anyone want to celebrate losing a war?” Leo asks, exasperated. How could two sides of the same nation so misunderstand one another?

This is not a happy-go-lucky “let’s take Grandma out for Mother’s Day play” (depending on one’s grandma). Rather, as Americana-inflected musicals go, Parade traverses some somber territory, not least in the way it explores the racist South. Around scenic designer Matthew Keenan’s effectively understated set, the show’s African-American cast and characters spend much of their time placed off to the sides of the stage, literally marginalized — a choice that provides visual and contextual tension. It’s perhaps a frustrating viewing experience for the modern audience yet a realistic depiction of the place and period.

The point gets reinforced even more powerfully in the number “A Rumblin’ and a Rollin’,” in which the black townspeople remind us that for every Leo Frank accused and tried in the Jim Crow South, a dozen black or brown boys probably swung from trees for lesser crimes. On “Rumblin'” and throughout, music director and conductor of the 10-piece live orchestra, Jake Null, coaxes out the blues, country and Jolson-era jazz of the show’s strongest tunes. Among those, the foot-stomping gospel of “That’s What He Said” and “Come Up to My Office,” a wickedly ironic imagining of Leo’s possible guilt, perfectly capture the boldly provocative tone of Brown and Uhry’s work, and of this production’s rewarding, sure-footed approach.

André Hereford covers arts and entertainment for Metro Weekly. He can be reached at ahereford@metroweekly.com. Follow him on Twitter at @here4andre.
← Previous Story “Three Sisters” and “No Sisters” at Studio Theatre (reviews)
Next Story → Everyman Theatre’s “Los Otros” explores cultural and sexual identity