Novel Notion: The Select at The Shakespeare Theatre Company (Review)

Hemingway fans will appreciate the faithfulness of The Select, but for everyone else it's a bit of a slog

There are two ways to look at Elevator Repair Service’s The Select (★★★). There is the idea of it — a near-verbatim dramatization of Ernest Hemingway’s The Sun Also Rises — and then there is the reality of sitting through it.

Let’s start with the positives. The idea is fascinating. Adapted only to remove duplication and long descriptions, the play uses Hemingway’s own words exclusively — be it expository or dialogue — to tell his tale of an itinerant group of thirty-somethings drinking their way through post-WWI Europe.

As such, the first-person narrative of Jakes Barnes, his somewhat world-weary protagonist, serves as the backbone of the production, his monologues catalysts for the scenes and vignettes Hemingway bestowed with dialogue. One minute Barnes is speaking to us directly, telling us his story, while the next he is immersed in a scene that forwards the plot — it’s a dramatic push-pause-push that works very well.

What also works here is David Zinn’s attractively low-key set, a bar that transforms as players and props suggest an ongoing array of different locales. Equally effective is a clever and evocative soundscape that punctuates and enhances the mood, as orchestrated from discrete mixing boards onstage. The music of the day invites several interludes of snazzy dancing, reflecting the bacchanalian mood of those determined to drink their way through post-war malaise. Everything is choreographed with immense care, be it scene and character changes or the position of the innumerable half-filled glasses littering the tables. All told, it’s a lot of moving parts and the ensemble seamlessly works the many puzzle pieces over the long evening — and for that they deserve much credit.

But — and it’s a big but — despite the great idea and the skillful execution, experiencing nearly three hours of it is just too much of a good thing. Put simply, what may be hypnotic to read in contemplative silence becomes a kind of endurance test when played out in this semblance of real time, no matter how clever the stagecraft or lively the embodiments.

Opera can pull off this kind of marathon because it is an expanded universe in which music and voice serve as transport. Here, we are trapped on one plane where everything cerebral is made literal and, after the novelty wears off, ends up feeling kind of like a dramatic cul-de-sac. Take the story’s “it” girl, the elusive Brett Ashley, who spends her days stringing along hapless men mesmerized by her beauty and ennui. As nicely as Stephanie Hayes captures this rather less-than-sympathetic woman, there is only so much of her blank-eyed sashaying around bars and hotels one can take before we are as blank-eyed as she is. Without more, this is a character better played by an imagination, not an actor.

That said, one compensation is the subtly seductive Mike Iveson as protagonist Jake Barnes. Capturing Hemingway’s style with an intelligent, laconic delivery, Iveson gives his man an intriguingly nuanced personality. We learn early on that Barnes has been made impotent by a war injury and he can never be more than friend and confidant to Brett. Unable to abandon her, he must play witness to her endless dalliances and yet he remains a rueful, philosophical observer. He is a man smiling — quite literally — in the face of defeat, and it suggests a complex inner life.

Also well-played is Paul Boocock’s Mike Campbell, a drunken, British toff content to leave open indefinitely his marriage proposal to Brett, despite her romantic wanderlust. Boocock nicely captures Mike’s entitled bluster and — as would have been common in the day — his unabashedly anti-Semitic attitude towards Robert Cohn, another of Brett’s hangers-on. In smaller roles, but bringing some of the best moments of atmosphere and inventiveness, Susie Sokol is extraordinary as bull-fighter Pedro Romero, while Robert M. Johanson offers some hilarious dancing and a comic rendering of writer Bill Gorton. Nailing it more often than not, Vin Knight delivers several wonderfully drawn characters who come into Barnes’ orbit in various European corners.

That said, though he does a tremendous job of orchestrating the piece as director (and sound mixer), in the role of Cohn, John Collins is a tad too deflated, too wooden. Part of this is the challenge of the role: he is described only schematically by narrator Barnes and remains largely reticent. It is very hard to play someone designed to live in the space behind the written word.

The lesson here is that purity of purpose costs. Cutting the length and maybe even taking a bit of poetic license would have made this far more watchable, as the troupe no doubt knows. So, it boils down to this: devotees of Hemingway and those with a taste for the avant garde will likely be riveted. Everyone else will be in for a long night.

"The Select" by Shakespeare Theatre Company 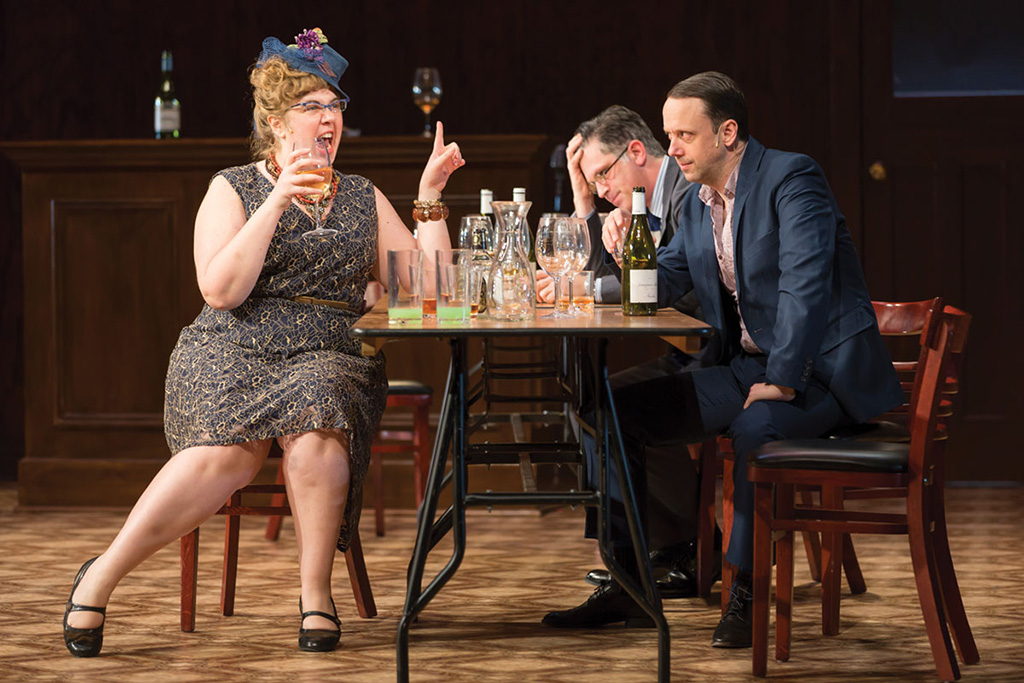