By John Riley on March 7, 2017 @JohnAndresRiley 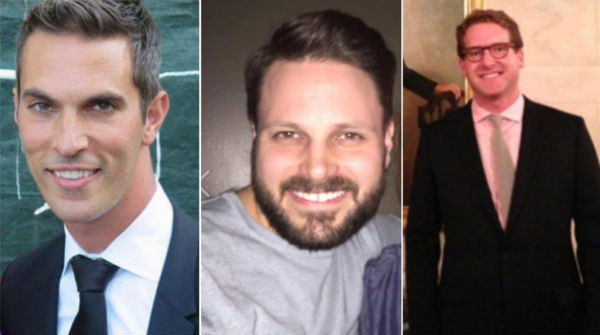 Supporting and Mentoring Youth Advocates and Leaders, the D.C. area’s LGBTQ youth organization, has announced the appointment of three new members to its board of directors. The three new members are: Ari Shapiro, Chris Wood, and Daniel Penchina.

“We are thrilled to welcome these three leaders in our community to the SMYAL Board,” Board President K. Dane Snowden said in a statement. “Their commitment to our youth and to our mission will resonate throughout the organization, and we are excited to have their insight and leadership as a part of the Board as we broaden and build SMYAL’s platform and programs.”

Shapiro, a correspondent for National Public Radio and a host of NPR’s “All Things Considered,” is a reputable journalist who has been honored for his coverage of domestic and international affairs. He was previously named one of Out Magazine’s “Out 100” in 2008 and as one of The Advocate‘s “Forty under 40” in 2009.

“Even though LGBT people have made real progress in my lifetime, queer youth still face high rates of homelessness, suicide, and bullying,” Shapiro said in a statement. “I joined the SMYAL board to support an organization that works directly with young people to address those problems.”

Wood, an entrepreneur and social media, public relations, and marketing consultant, is the co-founder of the nonprofit LGBT Technology Partnership and the not-for-profit LGBT Technology Institute, which both focus on the intersection of LGBTQ advocacy and technology. He has also served as a consultant to national LGBTQ organizations focusing on economic development, job training, and legal programs for transgender people.

“Joining the SMYAL Board was an easy decision,” Penchina said in a statement. “In a region that often looks nationally and internationally, it’s great to have a place to focus locally on those who often need us the most, our youth.”

Some of SMYAL’s current youth programs include its work with local area schools to set up Gay-Straight Alliances, or GSAs, as well as weekly programming at its youth center that focuses on activism, leadership development, mental health issues, and transgender issues, and its weekly recreation night, which provides LGBTQ youth a chance to socialize in a safe space. Sharifa Love-Schnur, the group’s communications and development coordinator, says that SMYAL is planning for the expansion of its transitional housing program for at-risk or homeless LGBTQ youth, which includes wrap-around services for the youth in residence, and its Wrap MC program, which works with schools to provide comprehensive, LGBTQ-inclusive sex education.

John Riley is the local news reporter for Metro Weekly. He can be reached at jriley@metroweekly.com
← Previous Story Supreme Court asks 4th Circuit to reconsider ruling in Gavin Grimm case
Next Story → Capital Pride to host “Magic of Pride” conference