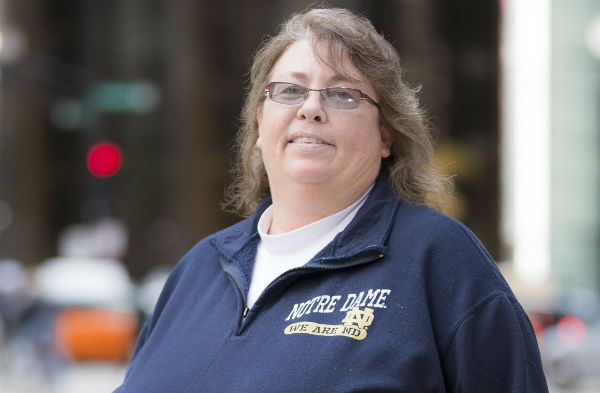 In a groundbreaking, historic decision, the full 7th U.S. Circuit Court of Appeals has ruled that workplace discrimination based on sexual orientation violates Title VII of the Civil Rights Act of 1964.

In issuing its 8-3 decision, the full 7th Circuit overturned its own precedent to find that Ivy Tech Community College, of South Bend, Ind., discriminated against adjunct professor Kimberly Hively when it refused to consider her for a full-time teaching position six different times, and eventually firing her, after someone at the college reported seeing her kiss her girlfriend goodbye in the campus parking lot.

Though the kissing incident occurred in 2009, Hively continued to be passed over for full-time employment. In 2013, she filed a complaint with the Equal Employment Opportunity Commission claiming she had been denied full-time work and a promotion, in violation of Title VII of the Civil Rights Act which prohibits discrimination based on sex. She later filed a lawsuit in federal court arguing that the college’s decision to pass her over for promotions and eventually terminate her because of her sexual orientation constituted sex discrimination.

Both the district court and a 7th Circuit panel ruled against Hively, throwing out her lawsuit on the grounds that Title VII does not protect against discrimination based on sexual orientation. The three-judge panel ruled that it was up to Congress, not the courts, to change the law to include protections for sexual orientation. Hively’s lawyers subsequently asked for an en banc review of the case, meaning it was heard by all sitting judges on the 7th Circuit.

“Viewed through the lens of the gender non-conformity line of cases, Hively represents the ultimate case of failure to conform to the female stereotype (at least as understood in a place such as modern America, which views heterosexuality as the norm and other forms of sexuality as exceptional): she is not heterosexual,” said Judge Diane Wood, writing for the majority. “Our panel described the line between a gender nonconformity claim and one based on sexual orientation as gossamer-thin; we conclude that it does not exist at all.

“Hively’s claim is no different from the claims brought by women who were rejected for jobs in traditionally male workplaces, such as fire departments, construction, and policing,” Wood continued. “The employers in those cases were policing the boundaries of what jobs or behaviors they found acceptable for a woman (or in some cases, for a man).”

The 7th Circuit’s ruling makes it the first appeals court to rule that Title VII, which typically deals with discrimination based on sex stereotyping or gender-nonconformity, implicitly prohibits discrimination against people based on their sexual orientation. Conversely, the 11th Circuit ruled last month that the statute does not prohibit anti-gay discrimination. As a result, there is a split among circuit courts, which could likely pave the way for an eventual Supreme Court case that will determine the fate of protections for gay, lesbian, and bisexual workers.

“Our panel described the line between a gender nonconformity claim and one based on sexual orientation as gossamer-thin; we conclude that it does not exist at all.”

Lambda Legal, which is representing Hively, issued a statement celebrating the historic nature of the decision.

“This decision is a game-changer for lesbian and gay employees facing discrimination in the workplace and sends a clear message to employers: it is against the law to discriminate on the basis of sexual orientation,” said Greg Nevins, Employment Fairness Program Director for Lambda Legal.

“In many cities and states across the country, lesbian and gay workers are being fired because of who they love. But, with this decision, federal law is catching up to public opinion: ninety-percent of Americans already believe that LGBT employees should be valued for how well they do their jobs — not who they love or who they are,” Nevins added. “Now, through this case and others, that principle is backed up by the courts.”

“I have been saying all this time that what happened to me wasn’t right and was illegal. Now I will have my day in court, thanks to this decision,” Hively said in a statement. “No one should be fired for being lesbian, gay, or transgender like happened to me and it’s incredibly powerful to know that the law now protects me and other LGBT workers.”

John Riley is the local news reporter for Metro Weekly. He can be reached at jriley@metroweekly.com
← Previous Story HRC: Gorsuch’s written responses to LGBTQ rights questions are troubling
Next Story → Anti-transgender school board candidates lose in Illinois