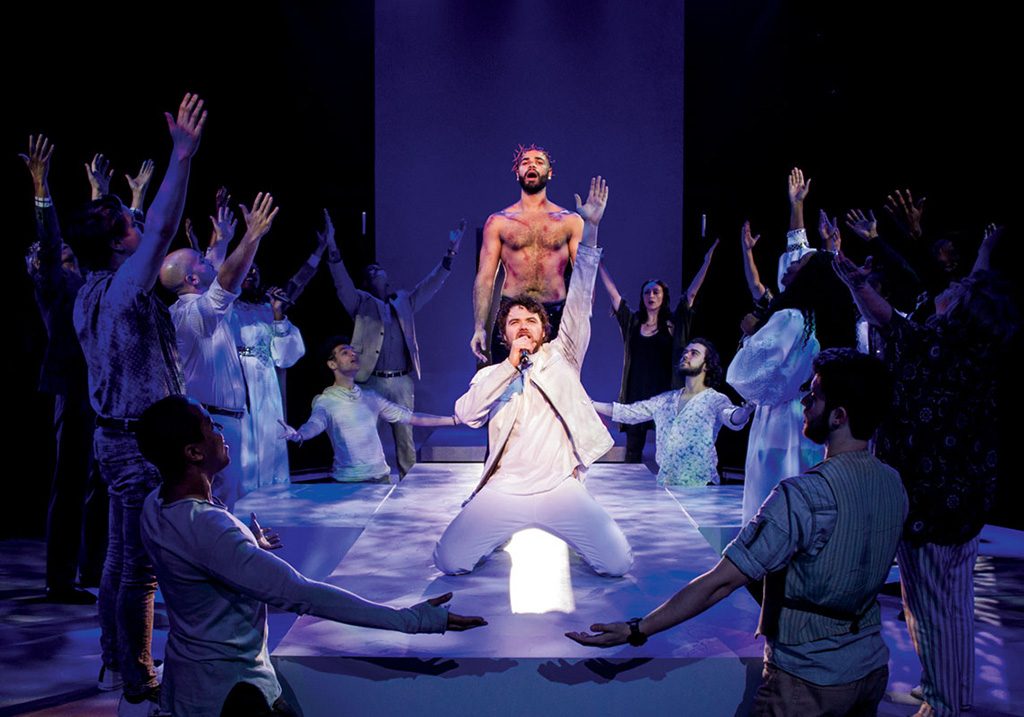 Featuring lyrics by Tim Rice and a score by Webber, Jesus Christ Superstar (

) began its life as a chart-topping 1970 concept album about the final days of Jesus of Nazareth. Given a persuasive rock, gospel, and blues interpretation by musical director William Yanesh, the songs — from the rousing “What’s the Buzz” to the plaintive “I Don’t Know How to Love Him” — are as dynamic and moving as ever. Conducting a mighty mini-orchestra, Yanesh, on piano, leads the band in laying down a rich bed of melody and rhythm for the show’s uniformly fine singers.

Channelling choreographer Karma Camp’s slinky, peppy moves, the performers faithfully flock around Jesus (Nicholas Edwards) with infectious joy and physical abandon. Singing and bouncing off nearly every surface of Luciana Stecconi’s austere set, which evokes everything from ancient temples to Houston’s serene Rothko Chapel, the actors capture the boundless spirit of the devoted. As their outsized devotion comes to be used against Jesus, raising the doubts of his apostle Judas Iscariot (Ari McKay Wilford) and enraging the priest Caiaphas (Thomas Adrian Simpson), the mob’s collective energy turns chillingly cold. In riveting fashion, belief is manipulated into distrust, leading to a wrenching crucifixion.

At nearly every step, the show walks with Jesus and his ultimate betrayer Judas, both fleshed out with nuance and conviction by Edwards and Wilford. Rice and Webber conceived a Christ who is no meek shepherd, but rather forceful in holding his followers accountable for how they worship. Edwards captures that rigor and strength, but occasionally comes close to a portrayal more strident than merely strict. By contrast, he wields his pleasing falsetto gently, and embodies the charisma of a caring leader.

“The energy onstage is dazzling, and the storytelling so accessible that the production manages to provoke, delight, frighten, and comfort.”

As Judas, Wilford impresses while performing triple duty — singing fabulously, depicting crucial elements of the story, and rocking a mean guitar. His Judas is already turned up to 11, leaving little room to modulate bigger. But for the most part Wilford’s confident delivery suits the concert-style presentation.

Several Signature favorites give standout performances in supporting roles. As the viciously critical priest Annas, Sam Ludwig pitches his tenor sharply towards comic derision, adding a bite of humor to the proceedings. As does Sherri L. Edelen in a brief, taunting turn as King Herod. Bobby Smith is equally memorable as an imperious but not impervious Pontius Pilate, and, playing a heartfelt, dulcet-voiced Mary Magdalene, Natascia Diaz shines. 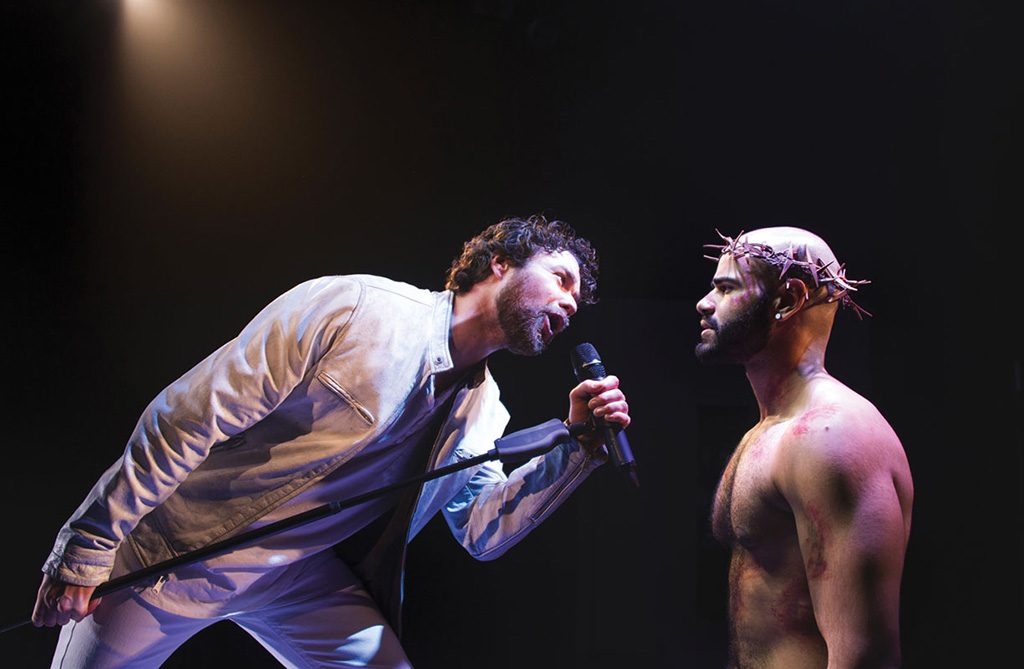 Augmented by dazzling lights and shifting trompe l’oeil projections, the production falls squarely between concert, theater, performance art, and religious ceremony. Not every scenario pays off, as is the case with the less than imposing figures shown silhouetted behind flowing curtains during the first act’s “The Temple.” The theatrical effect fails to match the potency of Jesus’ anger and disappointment upon finding the temple in Jerusalem being used as a marketplace, rather than a house of religion — although, neither the original score, nor Calarco’s direction, go to any great lengths to clarify exactly what religion Jesus is preaching. The message feels more philosophical than spiritual. “I look for truth,” Jesus proclaims, emphasizing Rice and Webber’s intent to reflect with Superstar the way many orthodox societies have responded with fear and hatred when an individual voice rises up claiming to be a truth-teller.

Still, there’s inspiration to be found here, regardless of one’s affiliations. While short on visual splendor, the energy onstage is dazzling, and the storytelling so accessible that the production manages to provoke, delight, frighten, and comfort. Powered by its energized ensemble, Signature’s rendition of Rice and Webber’s justifiably beloved classic might make believers of all who enter here.

André Hereford covers arts and entertainment for Metro Weekly. He can be reached at ahereford@metroweekly.com. Follow him on Twitter at @here4andre.
← Previous Story Egged On: ‘Five Lesbians Eating a Quiche’
Next Story → The African-American Collective Theater celebrates its silver anniversary