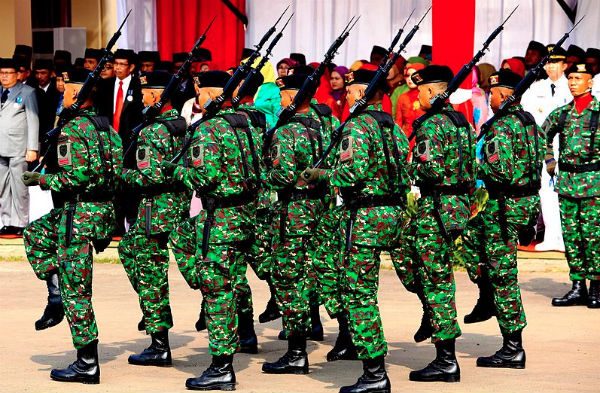 Indonesian police have set up a new task force to investigate activities by LGBTQ people in the province of West Java, reports the South China Morning Post.

West Java police chief Anton Charliyan said the task force includes police, members of the army, and provincial officials, who will essentially serve as spies to root out locations used for parties where LGBTQ people may congregate.

Charliyan told reporters that gay people suffered a “disease of the body and soul” and “will not be accepted in [Indonesian] society.”

“I hope there are no followers in West Java, no gay or LGBT lifestyle or tradition,” Charliyan said. “If there’s anyone following it, they will face the law and heavy social sanctions.”

The establishment of the task force continues a pattern of police cracking down on any activities that are thought to promote homosexuality. It comes just a week after the public caning of two men in Indonesia’s Aceh province. The men had been spied upon and found in bed by police, after which they were arrested and later convicted of violating Sharia law, which is enforced in Aceh province.

During the caning a radical vigilante group known as the Islamic Defenders Front set up a banner at the local mosque claiming that it is ready to “defend” Sharia law, whatever the cost. In addition to targeting the LGBTQ community, the group has also previously levied attacks against secularists, shop owners, bars, nightclubs, and non-Muslims.

Historically, even though it is a Muslim-majority nation, Indonesia has largely been pointed to as an example of a tolerant Islamic society. But concessions by the national government allowing Aceh to govern itself, as well as a increase in the popularity of socially conservative or religiously-based political views have led to multiple raids or arrests targeting LGBTQ individuals. Earlier this month, 14 men were arrested at a private party in Surabaya and forced to submit to HIV tests. Another 141 men were arrested in a raid of a party at a local sauna in the capital of Jakarta.

Some human rights advocates and LGBTQ groups fear that with a growing embrace of socially conservative groups, the nation may soon ban or criminalize homosexuality outright. Last May, the Family Love Alliance petitioned the Constitutional Court to ban homosexual activity between consenting adults. Currently, homosexual sex is only banned if one of the parties is a minor. But the court could make the decision to amend that law by deleting the reference to “minor.”

Todung Mulya Lubis, a lawyer in Jakarta, believes the court will take that step and ban homosexuality altogether. Lubis notes that judges tend to echo popular sentiments when handing down verdicts, and majority opinion of LGBTQ people is unfavorable at the present time.

“In all likelihood the court will ban it,” he tells the Morning Post. “For them it is ‘human rights minus LGBT.'”

John Riley is the local news reporter for Metro Weekly. He can be reached at jriley@metroweekly.com
← Previous Story Chechnya leader: Purge of gay men is “absolute lies”
Next Story → Russian store puts up “no entry for faggots” sign