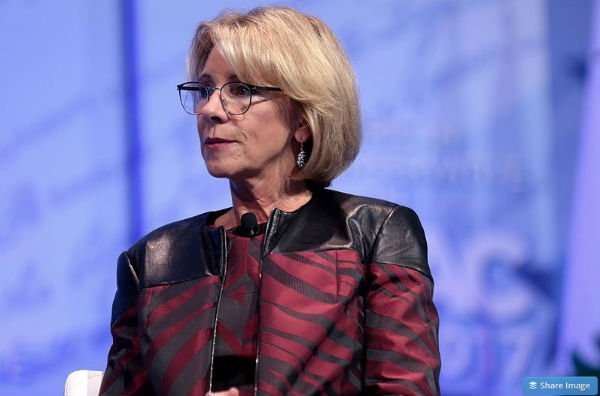 The Log Cabin Republicans and its nonpartisan sister think tank, Liberty Education Forum, have submitted a white paper to the U.S. Department of Education outlining suggestions and policies to ensure transgender students are treated according to their gender identity.

The white paper, Transgender Student Safety & Equality for All Students, seeks to replace rescinded guidance from the Obama administration that urged all school districts to adopt similar policies that recognized transgender students’ gender identity, rather than their biological sex at birth.

That guidance was later rescinded by the Trump administration, with Education Secretary Betsy DeVos arguing that its recommendations were too broad and constituted an “overreach” by the federal government. DeVos has argued that the Obama-era guidance did not allow schools enough flexibility to craft and carry out their own policies to meet the needs of individual transgender students.

Mindful of the Trump administration’s wariness toward one-size-fits-all policies and preference for allowing individual states to set their own policies, Log Cabin’s Transgender Leadership Caucus has crafted pro-transgender policies that can easily be implemented at the local level, in the hope that such proposals will be embraced by the Department of Education.

For instance, Log Cabin’s guidance suggests that schools wishing to accommodate transgender students could designate single-stall restrooms that are currently set aside for one gender as unisex. The organization also recommends that schools can repair multiple-stall restrooms to ensure locks on stalls are properly functioning and can allow for greater privacy, and, in the case of locker rooms, curtains and partitions can be used to provide additional privacy for either transgender students or those students uncomfortable changing in front of transgender peers.

In its white paper, Log Cabin highlights specific examples of school districts where such transgender-inclusive policies are currently in place. Log Cabin also notes that many of the proposed policies highlighted in its report ended up costing school districts no money or less than $250 — ensuring that schools will not experience “sticker shock” when trying to accommodate transgender students.

The white paper also proposes guidelines meant to alleviate the anxieties or concerns of parents who may not be familiar with gender identity or have raised the specter of people asserting transgender status for some “improper purpose.” To address those concerns, Log Cabin provides examples of how a student can provide “evidence” of their transgender status.

Such evidence can include a letter from a parent or guardian, nurse, guidance counselor, or professional therapist attesting to their gender identity, a letter from a medical professional informing the school of the student’s gender transition, or an assessment by school district personnel. Once the student is determined to be transgender, administrators can begin negotiating the types of accommodations necessary for that individual student.

Log Cabin’s proposals would also allow students to change their name and gender identification, just as they would be able to change other pertinent information such as their residential address, mailing address, or updated list of adult emergency contacts.

The white paper was submitted to Education Department officials in person by Log Cabin President Gregory T. Angelo and members of the Transgender Leadership Caucus. Those in attendance later reported that they felt department officials were mindful of the group’s concerns and open to suggestions about how best to serve transgender students.

“Today’s meeting with the Department of Education was very heartening and quite productive,” Jennifer Williams, a member of the Transgender Leadership Caucus, said in a statement. “Their staff were fully engaged and they asked many great questions about the important issues involved and about our lives as transgender Americans.”

“We are very pleased with the conversations and are looking forward to helping to produce Title IX guidance that will protect the privacy and needs of all students, both transgender and non-transgender alike,” added caucus member Regina Roberts.

Report: 60% of transgender students have been barred from appropriate restrooms

John Riley is the local news reporter for Metro Weekly. He can be reached at jriley@metroweekly.com
← Previous Story Gavin Grimm to be honored at NCTE anniversary event
Next Story → Same-sex marriage supported by more Americans than ever before