Myth Busters: The Folger rises to a challenge with ‘Timon of Athens’ (review)

Shakespeare's Timon can't be easy to stage, and that's why the unstoppable folks at Folger took it on. 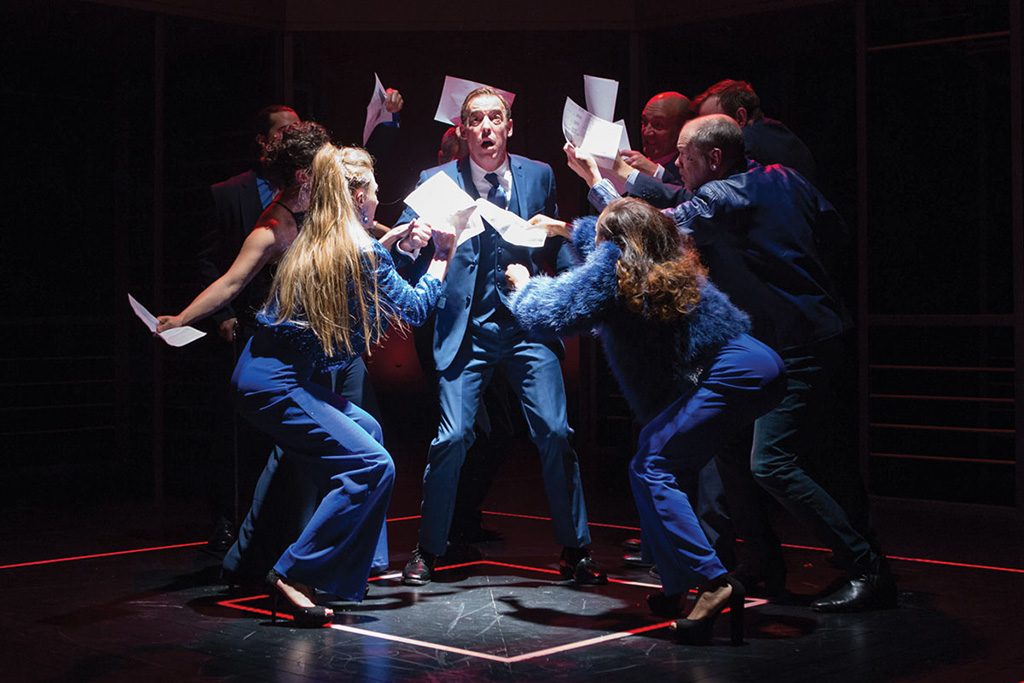 Likely co-written with Thomas Middleton, Shakespeare’s Timon of Athens (★★★) is something of an odd, uneven play. It starts with the promise of gratifying comeuppance — the wealthy Timon’s realization that his supposed friends are the kind that disappear when the money runs out. But there is little more, and certainly no real exploration, before Timon is angrily serving up (literally) a communal rebuff. The play then changes tone, pivoting to Timon’s angry self-exile from Athens, where he continues to be visited by users and a few compatriots. There is never much of a catharsis other than his evolving conclusion that humanity sucks.

Timon never quite endears himself enough to be tragic, nor do his enemies truly get their just desserts, unless you count a significant dry-cleaning bill. Subplots about the political health of Athens and Timon’s friend Alcibiades, ably played by Maboud Ebrahimzadeh, hang largely unresolved. Ultimately, it feels like some kind of morality play that deflates into a long-winded, anatomy of a bagman.

It can’t be easy to stage, but that’s probably why the unstoppable folks at Folger took it on. They do like a challenge, and they know how to rise to it.

In this case, Tony Cisek’s cleverly evocative set moves the action into the future, suggesting efficiencies that have eroded personal contact, perhaps to the kind of dystopian levels that could explain Timon’s rejection of his world. And it is in explaining this man that director Robert Richmond and Ian Merrill Peakes, in the title role, do the serious work.

In this rendering, Timon is seen first as a successful businessman, but beneath his well-groomed exterior lies an unsettled, neurotic soul. Whether it suggests latent mental illness or a psyche too sensitive for his world (or both), it makes for a valiant attempt at explaining the play’s long second-half, in which Timon is lost in a wilderness, both literal and psychological.

Does it work? Not wholly. Part of the problem lies with the play itself and its unconvincing transitions, but it is also the challenge of sustaining the sense of the executive gone semi-mad. Peakes is a nuanced and understated actor and it works to great effect in the first part of the play in interpreting Timon as a (secretly) socially awkward and naïve man, blind to his false friends. But his extroversion — first with the confrontational banquet and then the assertive self-exile — make for a harder sell. Given the concept, it might almost have made more sense to give him a corporate tower in which to cloister himself.

Sustaining Timon’s feverish state of maddened disillusion during the second half of the play is another challenge. It’s a long haul and, in trying to keep it compelling, Peakes must walk a tightrope: too low-key and it may fail to compel, but overplayed and it gnaws at the scenery. This is where director Richmond must be the decider, and a tad more reigning in would have worked better. Peakes is a wonderful actor and his less is always more.

Bringing a nice counterweight to Peakes’ agitated Timon, is Eric Hissom as Apemantus, a philosophical acquaintance who plays witness to Timon’s faithless friends and his subsequent meltdown. Hissom, a master of Shakespearean phrasing, offers the perfect blend of a man bemused, cynical and contemptuous of Timon’s world. The other standout here is Antoinette Robinson as Flavius, Timon’s faithful servant. Quietly pained by what she sees, Robinson brings an emotional cohesion to the uneven play.

If the play itself can’t quite deliver the pathos or gratification of full-blooded Shakespeare, this production of Timon delivers something with its own unique value: a genuinely engaging theatrical grapple with a challenging piece.

← Previous Story Studio’s ‘The Father’ is a ‘dark and piercing’ comedy (review)
Next Story → Diva Central: ‘Master Class’ is an ‘engaging treat’ (review)