Studio’s ‘The Father’ is a ‘dark and piercing’ comedy (review)

The right actor for a brilliant play, Ted van Griethuysen leads a wonderful production of The Father

A stark drama tilted acutely towards the droll humor of its octogenarian title character, The Father (★★★★★) also offers a walloping dose of what feels like the truth. Florian Zeller’s illuminatingly dark and piercing comedy — translated from its original French by Christopher Hampton — is brutal but not cold in its honesty. It handles an audience much like the daughter at its center, Anne (Kate Eastwood Norris), handles her mercurial, elderly father, André (Ted van Griethuysen) — with firm directness, guided by warmth and patience.

A lightning wit and devilish flirt, André has just scared off his latest housekeeper/personal caretaker, Isabelle. Though never seen in the play, the young woman’s absence is felt by Anne, who believed she finally had found the person who could be nurse, companion, and lion tamer to tend to her dad on a daily basis, thus enabling Anne to focus on managing her own life.

André was certain that the girl was stealing from him, and had taken to setting traps around the house to prove his suspicions. So Anne brings in a new girl, Laura (Caroline Dubberly), who seems competent and serene in equal measure. Finally freed from some responsibility, Anne can move forward with less guilt, and consider taking a big step with her boyfriend, Pierre (Manny Buckley). Or was it Antoine (Daniel Harray)?

From one moment to the next, André isn’t certain if Anne is still married to that pesky Antoine, or if Antoine is Pierre, or if the woman standing before him saying she’s Anne (Erika Rose) actually is his daughter or a different person altogether, a stranger. Still sharp and cantankerous, and anchored in the reality of his charming Paris apartment, André is increasingly affected by his mind’s steep decline. His thoughts flicker heedlessly, like the strobe lights racing over and around set designer Debra Booth’s cleverly specific scenery.

Not entirely unaware, André rails in his fog against the painful loss of clarity and agency. Van Griethuysen, in a roundly sympathetic portrayal, makes sublime comedy of the man’s rancor and befuddlement, without a hint of parody. Beautifully rendering André’s layers of confidence — gradually torn away by confusion — van Griethuysen, abetted by director David Muse’s powerful staging and transitions, persuasively relays André’s shaky, shifting point of view.

André can’t trust his memories, or recognize all the faces around him, and, in what seems like a moment, a decade might pass. It’s humbling, horrifying, and utterly true, whether one has stood on Anne’s or André’s side of the line. Zeller’s play taps into the universal fear of getting old, as well as the associated anxiety of needing to be strong enough, fit enough, and in this world rich enough, to care for someone who’s gotten old.

The Father also taps into the frisson of generational dissonance now roiling culture and politics — and shaping elections — in nations across the globe. André could be an 80-something of almost any era, but he feels particularly representative of a certain great or Greatest generation, old enough to have lived through the last world war, yet with perhaps more vivid memories of those great times (for some) that followed.

André and his male peers in 20th century middle and upper-class society had it good and simple for a dozen or more years, until the flames of societal revolution were lit before their very eyes. Propelled by technology, change that had been gradual suddenly hurtled forward at breakneck speed, and now at every turn, they see new, unfamiliar faces, and hear languages and voices they don’t recognize as being like their own.

The play’s subtle comments on the reactionary ways of our culture’s elders are drawn out into the open here by the smart, diverse casting of the ensemble. It’s just one more way that Studio’s well-appointed and splendidly acted production succeeds in expressing the wealth of truth and wisdom in this inspiring, heartbreaking, and absolutely terrific play.

The Father at Studio Theatre 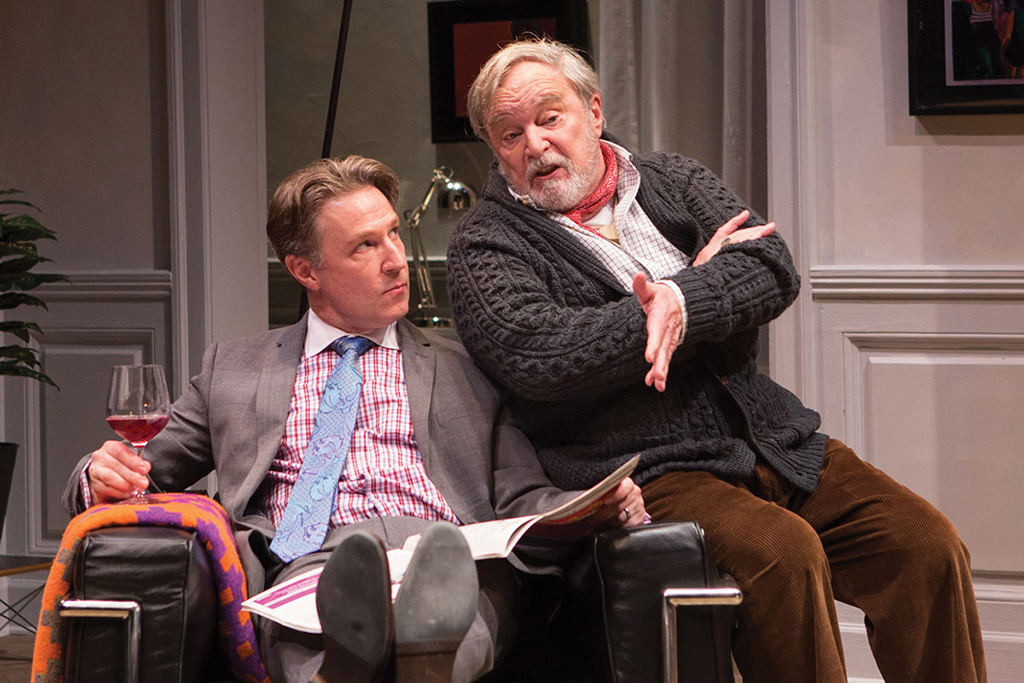