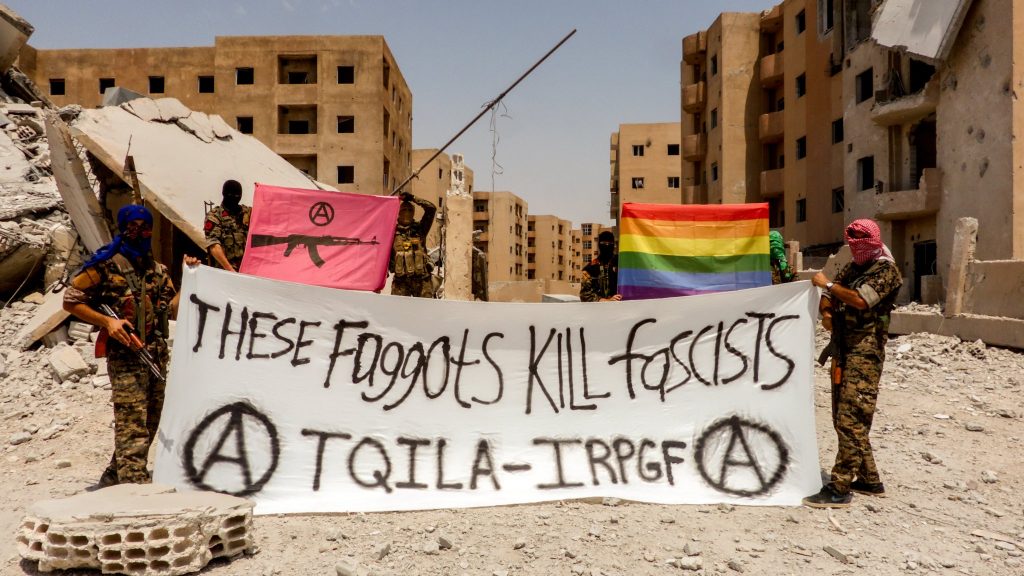 After years of watching ISIS slaughter innocent gay men by stoning them, throwing them from rooftops, or shooting them, LGBTQ people are fighting back.

A new military unit comprised of international LGBTQ volunteers has joined the battlefield in Syria to help Kurdish fighters and others in the ongoing battle against the so-called Islamic State.

Dubbed “The Queer Insurrection and Liberation Army,” or TQILA (pronounced tequila) for short, the group is part of the left-wing International Revolutionary People’s Guerrilla Forces (IRPGF).

The announcement came in a statement posted to IRPGF’s Twitter: “We, the International Revolutionary People’s Guerrilla Forces (IRPGF) formally announce the formation of The Queer Insurrection and Liberation Army (TQILA), a subgroup of the IRPGF comprised of LGBT*QI+ comrades as well as others who seek to smash the gender binary and advance the women’s revolution as well as the broader gender and sexual revolution.”

The statement noted that those who chose to join TQILA have “watched in horror as fascists and extremist forces around the world have attacked the Queer community and murdered countless of our community members citing that they are ‘ill’, ‘sick’, and ‘unnatural’. The images of gay men being thrown of roofs and stoned to death by Daesh [ISIS] was something we could not idly watch.”

Under ISIS’s penal code, being gay is punishable by death.

The formation of The Queer Insurrection and Liberation Army (TQILA), a subgroup of the IRPGF. Queer Liberation! Death to Rainbow Capitalism! pic.twitter.com/Tp1x2PZ079

The group also equated ISIS’s attempted erasure of LGBTQ people with the efforts of “Christian conservatives in the global northwest,” who IRPGF accuse of attacking LGBTQ people “in an attempt to silence and erase their existence.”

Speaking to Newsweek, TQILA wouldn’t confirm how many of the group’s fighters are actually LGBTQ, citing security concerns.

“Many of our comrades are within the LGBT*QI+ community,” a spokesperson said. “We are already fighting in Raqqa.”

On Twitter, IRPGF put it a little more succinctly: “These Faggots Kill Fascists! We shoot back! The Black & Pink and Rainbow flag fly in Raqqa.”